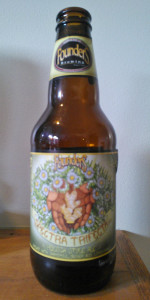 *****I am rating this beer against the brewers intentions.....not for my specific taste****** The Spectra Trifecta was good....but for me one was enough. There is a lot going on with this beer. It poured a golden yellow with white head and floaties. The scent carried ginger and chamomile. The taste was heavy with lemon grass and ginger with hints of chamomile. The mouthfeel was medium in body with good carbonation. Overall it was ok.

Carbonated, alcoholic herbal tea is what this stuff tastes like. Horrible, and probably a waste of a perfectly decent Kolsch underneath.

Good color, but perfumey herbal nose with the expected chamomile, ginger, lemongrass. On the palate it was like drinking a straw colored potpourri basket, nearly inducing my gag reflex on a couple of occasions. What a horrible concoction of additive flavors to make this instead of a lovely kolsch, like they quite possibly could have done.

Pass on this one, or serve it as a white elephant drink to unsuspecting Christmas party guests.

On tap at The Tap and Mallet in Rochester, NY.

This one pours a a golden dark-ish yellow, with a half inch head, and a small amount of lacing.

Smells pretty typically Kolschey, with some spicing and grassiness. The aroma here doesn't tell the whole story of this disaster of a beer.

Does anybody remember that scene in a Christmas Story, where Ralphie drops the F-Bomb (Fuuuuuuuudgeeeee), and his mom makes him put the bar of Lifeboy soap in his mouth? That scene is akin to the flavor profile Founders constructed here. The chamomile flavor just does not sit well with the Kolsch base, to my tastes, it just makes everything taste so soapy and gross. I can tell there's a decent Kolsch underneath here- but the added flavors, the ginger, the lemongrass, and ESPECIALLY the dreaded chamomile, are just unnecessary and detract from everything.

It was all over - I was dead. What would it be? The guillotine? Hanging? The chair? The rack? The Chinese water torture? Hmmph. Mere child's play compared to what surely awaited me.

On to the mouthfeel, it's fairly crisp and Kolschy, but not all that drinkable due to the horrid flavor. I couldn't finish the pint, and I can usually finish anything.

Very appropriate color for Kolsch but with little to no head, reminiscent of a soda. Cereal and grains in the aroma with apparent chamomile. The flavors blend together but leave me with the impression that I'm a very strange herbal soda and not a beer. Finish reminds me of sweet bran.

I love ginger in my beer but I'm glad I got a taster bottle before springing for a 6 pack. I just can't imagine a situation where I would crave a glass of this beer. No apparent off flavors but I think straight ginger or even ginger/lemongrass would have served this beer better.

Another quicky from the box. No huge review. Perfect tea beer.

EDIT : Again no true review so delete as you may..but a horrible beer based on top comments? Did you guys even read the description? No shit it isn't a typical kölsch. Your eyes were the only thing taking a guillotine while drinking this one on seeing that you couldn't read.

Serving: 12 oz. bottle poured into a Founder's taproom pint glass. Bottled on 8/21/15, making this just over a month old.

T: Strong ginger up front, followed by tea leaf, chamomile, pumpkin, nutmeg, lemon zest. The dryness and bitterness of the Kolsch-style is masked by all the ginger and lemongrass sweetness.

O: I've come to like the ArtPrize beer series. Having lived in GR for 4 years, it's always fun to see how they'll interpret the competition in their beer. Their first two have been home runs, the decadent Inspired Artist Black IPA and then last years wonderfully hoppy Mosaic Promise. This one again caters to the general public and the season: it's light, fresh, crisp, and zesty with some hints of pumpkin and nutmeg. For the style, I'm not too crazy about it. The traditional Kolsch gets buried in the sweetness. And I just don't like chamomile or ginger. But as a representative of an amazing art competition, this beer gets it done yet again.

Recommendation: The limited distribution is probably best for this beer, as I'd only recommend it for the locals or those visiting this month.

Had this gem at a Founder's event at Ashley's in Westland. Pour came in a shaker pint, with a ring of white foam capping clear, golden straw colored liquid. The aroma was something: floral, lemongrass was prominent, with white bread/cracker underneath. The chamomile made itself present in the flavor, sweetness right upfront, balancing the lemon. Ginger came on the finish, but the spiciness was kept in check. It was ginger flavor, but without the burn. Perfect as a refresher. This one deserves more than a limited run.