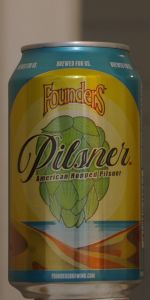 Notes: Always brewing to taste and rarely to style, Pilsner is the culmination of our love of American hops and appreciation of easy-drinking styles. Where traditional Pilsners typically feature European Noble hops, our version celebrates some of our favorite American varieties: Chinook, Centennial, Cascade and Crystal. Crisp and bright, with notes of citrus, this Pilsner is refreshingly untraditional. 5.5% ABV.

The recipe is exactly the same as PC Pils. We wanted to give the beer a refresh as far as the name and packaging go – something that spoke better to the beer inside. Pilsner will be available in 15-pack cans and draft from June-September in Michigan, Ohio, Illinois, Wisconsin, Pennsylvania, Indiana and New Jersey.

PC Pils pours a brilliant and bright canary straw color with impressive carbonation and an arid, loosely-knit swath of sea foam. Citrus and spice overcome the nose with a decidedly floral overtone while its taste is dry and cracker-like even in its terse grain sweetness.

Its sweet impressions are volatile and sweep away easily on the middle palate. Flavors of rustic grain and cereal remain while the hops come to steal the show. Its floral upstart turns to the citrus taste of white grapefruit, orange peel and light lemon before turning resinous with pepper, pine, lemongrass and citrus leaf to close.

Its peppery and sprucy bitterness easily overshadows the malt even though their use is moderate. The beer's remarkable dryness and elevated carbonation keeps the beer highly drinkable and refreshing with simmering warmth, trailing into a lemongrass finish with hints of mineral-rich seltzer.

Color: honey, not straw. Good head and lacing.
Aroma/Flavor:not unpleasant but hoppier than appropriate for style. It is a tasty enough beer and will probably pair well with the hot wings once they get here...but calling it a "pilsener" is a stretch. Premium American Craft Lager.
Mouthfeel: good, follows the head retention Not creamy and gets knocked down because of the bitterness in the aftertaste.
Overall: an okay beer but the implication of not living up to the "politically correct" suggestion of this as a "Pils" indicates that the naming committee needs to reconvene. "President Trump Bitter Blonde Lager" would work for me, not that there's a mandate for this sort of change.

If you like Sierra Nevada torpedo you will like this. If you are hoping for a traditionalPilsner you will be very disappointed. I am very disappointed in this beer. This taste more like a pale ale than a Pilsner. Very citrusy. This beer is basically what every other american brewery is brewing now. Citrusy hops in everything. What's wrong with just trying to make a very good version of a traditional beer. Yeah I know that with out trying different things we would never get anywhere new but this comes no where close to a Pilsner with a different hop selection. I don't know how to rate this beer. Should I rate it off flavor which is actually pretty good or should I rate it in trying to be a Pilsner? I will rate on flavor but do not buy this beer thinking you are getting a Pilsner with different hops.

Pours a clear, lighter yellow straw body, one finger white head, fair retention time, no lacing. Smells of grapefruit, a bit of bread, floral, pine. It's pretty much hopped up, without much breadiness or crackeriness to the aroma. Flavour is similarly hop-forward, without much bready pilsner character to it. Floral, grapefruit hop aromatics with a piney bitterness. It pretty much tastes like a slightly breadier All-Day IPA, a bit more malt and depth to it. Mouthfeel is medium-lighter bodied, good carb, fair amount of pine bitterness on the finish. Essentially a pale ale with a bit more malt to it, I would like more of the classic pilsner character and crackery breadiness that I've come to expect from pilsners in general.

Poured into a pilsner glass, pale golden color with a 1 inch head that's quick to dissipate. Aroma is grainy with a hint of floral hops. Crisp and clean tasting with a pleasant hoppiness, pretty dry which I like. It's 90 degrees out and this beer is hitting the spot. Not a traditional pils but a damn good spin on the style.

This may be one of those rare occasions on which I get to review one beer from two different serving styles. Our local rep laid a CAN on me recently, then I scored a bottle. This site used to allow us to review by serving style, but no longer. That is why I try to always identify such a thing when writing a review.

From the CAN (since The CANQuest (tm) is paramount): "Brewed for us."; "Crack it. Pour it. Love it."; "Pleasantly crisp, perfectly clean and profoundly crushable, PC Pils is our take on the classic Pilsner style. While Noble hops have been the preferred choice of Pilsner brewers around the world, we went with some of our favorite American varieties. Piney Chinook, pleasantly citrus Cascade and punchy Centennial make this an easy-drinker with floral hop characteristics. Pretty cool, if you ask us."

Nothing matches the Crack of a CAN, and especially when followed with an inverted Glug. I had to go easy with this one as my awaiting Pilsner glass would quickly overflow. Sure enough, the head came rushing up to create two fingers of dense, foamy, rocky, bone-white head that looked like meringue atop lemon pie filling. Color was Straw-Yellow (SRM = > 2, < 4) with NE-quality clarity. Nose smelled more pronounced in terms of the Chinook pine scent, but the citrusiness of the grapefruit and lemon was still evident. Mouthfeel was thin-to-medium. Here, the citrus flavors were very pronounced, especially the grapefruit while the malt was not really a factor. Finish was dry, very citrusy with a bit of pine, but still not much in the way of discernible malt(s). I hate to say it, but I think that I enjoyed what came out of the bottle a little more. That said, I would not hesitate to fill a cooler with CANs of this beer.

From the bottle: "American Hopped Pilsner"; "Pleasantly crisp, perfectly clean and profoundly crushable, PC Pils is our take on the classic Pilsner style. While Noble hops have been the preferred choice of Pilsner brewers around the world, we went with some of our favorite American varieties. Piney Chinook, pleasantly citrus Cascade and punchy Centennial make this an easy-drinker with floral hop characteristics. Pretty cool, if you ask us."

Ah, who asked yinz?!? Actually, I am quite hyped up to try this variation on a theme. I have been a fan of (especially Czech) Pilsners since my FerMentor, Lew Bryson, turned me onto the idea that Noble hops can be prevalent in a lager.

Here goes with the Pop! of the cap. I had my pilsner glass at the ready & standing by for my pour. I have Otterbein United Methodist Church directly across the street & I scour their monthly Attic Treasures rummage sale for glassware, like the one that I am using now. Gad, but this is one gorgeous beer! The cap of dense, bone-white head came right up and hung around like it was getting fed later. The color was Pale-Straw (SRM = 1 - 2) with NE-quality clarity & the tiny, effervescent bubbles made the entire thing look like a 1950's-era print ad for beer! The nose just made me laugh! I would love to know what malt(s) were involved, because this smelled fantastic! It was very citrusy, initially, with notes of lemon and grapefruit, followed by the pine of the Chinook, but I also got a biscuity maltiness, perhaps Pilsner malt (?). Mouthfeel was on the thin side, not exactly watery, but it was not winning any contests, either. The effervescence was a nice touch and opened up my taste buds. Other than the biscuity malt, I am not sure that I would have recognized this as a Pils. I like that this site is calling it an APL and there were definitely NO adjuncts in this beauty. The taste was a wild mélange of tangerine, orange, lemon, grapefruit and a pine tree falling right into the middle of the fruit basket! Ha ha. Finish was semi-dry, more fruity than pine, but wildly refreshing. Crushable? Heck, I could drink this all day out of my cooler! I haven't time to do the CAN review before Happy Hour, but I will post both reviews (as available) later.

Draft: Presented directly from the tap into a pint glass. Just under a finger of foamy, bone-white head with modest retention. Color was Straw-Yellow (SRM = > 2, < 4) with NE-quality clarity. Nose had a lemony citrusiness along with a light grassiness. Mouthfeel was medium. Taste had an interesting combined bitterness of lemon & grapefruit commingled with freshly-mown grass or hay. Finish was dry, in that pleasant, lightly hoppy way that a Pils should evince. The only thing that I lacked was a pretzel or two.

Light yet bright gold, with a large, white foam that dies to a thin blanket and thick collar, leaving no lace due to a fluid body.

Smell is actually quite cannabic and dank, with grass, onion, cirtrus and rubber--it's very potent for a pils, probably moreso than some of the most renowned, respected and aggressive American style Pilseners.

Taste is a little more grounded, but still aggressive, which I am surprised by for a Founders brew. I get cannabis, pine, grapefruit, bread, and grass. It's very tasty. As others have mentioned, this is essentially an IPL.

Hoppy yes, crisp yes but compare it to IPA's, MGD, Canoe Paddler, or Genessee Cream Ale I'd rather have those so just isn't something i'd buy unless it was on a hot summer day partying with friends and intention is to get wasted. 15 pack for $15 is a great price for this but I am glad I bought only 1 for $1.89. Worth trying but unlikely to get again. For if I want hops I'll buy IPA. Nevertheless it was a good effort by Founders.

trying this again. 1 Month old. Poured into a dimpled tankard.

L: 3.25 A little more color than an adjunct. Crystal clear. Bright goldish body with ample carbonation. Lingering white head.
S: 3.25 All hops. I look for more grainy characters in Pilsners, Not even floral.
T: 3.5 It's Okay, but there are better Pilsners out there. This is sweet. Lemongrass. Lager malts. A little bit of a bitter bite from the hops. Breakfast Cereal like fruit loops in the aftertaste, so I guess its a bit grainy, but still to sweet for my tastes.
F: 3.25 Okay mouthfeel. A bit hefty for a pils.
O: 3.25 It's okay. You can get it in 15 packs which is what attracted me back to it. At 5.5% ABV it's no session lager. I probably won't revisit this for awhile, if at all.