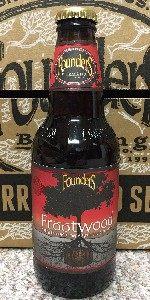 Notes: We took a crisp, light-bodied cherry ale and hid it away in oak barrels that have held both bourbon and maple syrup. After a lengthy stint, it emerged a changed beer, blanketed in notes of warm vanilla and earthy sweetness. The wood proves itself the star of this beer, adding depth and taming the tart cherry while the maple imposes a velvety texture that lingers for not a moment too long.
View: More Beers | Place Reviews
Recent ratings and reviews. | Log in to view more ratings + sorting options.
Rated: 3.95 by prototypic from Ohio

4.1/5  rDev +4.1%
look: 4 | smell: 4 | taste: 4.25 | feel: 4 | overall: 4
Real tasty easy sipper. A wonderful blend of tart cherries, sweet maple syrup with a well-behaved bourbon barrel flavoring in the background. Poured from a stubby 12 oz bottle into a tulip glass, this beer features a somewhat dense amber/orange color with a medium sized fizzy/carbonated white head. Head retention is remarkably good for a fizzy headed beer. There is also some spotty lacing on the glass. The aroma and taste start out with tart cherry with some sweeter maple syrup following. The tart fruit and sweet follow up remind me of fruity Belgian beers with candi sugar. The bourbon barrel flavoring kicks in at the end. It is somewhat subtle and that is a good thing. So many bourbon barrel beers are overwhelmed with bourbon flavoring to the detriment of other aspect of the beer. This bourbon flavoring enhances the beer rather than buries it!!! Mouthfeel is rich and alternating tart and sweet. It is very nicely carbonated and the alcohol presence is light. Not a beer for dinner, but a nice slow slipper with a great flavor profile!!!
Jul 28, 2022
Rated: 4.25 by kybeerdrinker from Kentucky

4.12/5  rDev +4.6%
look: 4.25 | smell: 4 | taste: 4.25 | feel: 4 | overall: 4
Poured reddish brown and had, for a barrel aged beer, an amazing head of dense off white foam.
The aroma was mild for me, but cherries and bourbon did make it through.
The taste was less cherries than expected, usually they overwhelm the base beer but here they play nice. The bourbon and maple syrup are both evident, it’s really quite tasty.
The feel has a viscous touch to it, which is perfectly appropriate for a BA beer.
This seems like it wants to be a hot weather beer, and maybe it is, as long as you are not looking to quench your thirst quickly. It’s a sipper.

T---Sweeter than expected from the nose. Cherry & maple syrup are dominant as the bourbon/booziness fades to the background.

Reviewed by Shmegmo from Connecticut

4.49/5  rDev +14%
look: 5 | smell: 3.5 | taste: 5 | feel: 4 | overall: 4.75
This beer is excellent and could easily appeal to people who like wine and cider more than beer. The barrel aging lends a warm butteriness to this sweet and fruity beer. It is too easy to drink these. To describe this beer fully, one would need to add axes to the flavor dimensions of beer. I appreciate the novelty of the flavor profile with its amalgation of fruitiness, maltiness, and oakiness. Call me a heretic, but this beer tastes even better as it warms up.
Apr 18, 2022
Rated: 3.99 by Sludgeman from District of Columbia

4.04/5  rDev +2.5%
look: 4.25 | smell: 4 | taste: 4 | feel: 4.25 | overall: 4
Poured from the tap into a clear pint glass, it arrives with a reasonable head with just the slightest off-white hue. The brew is a bright copper that's rather translucent. The aroma is mostly of sweet cherries. The oak tannins that likely await aren't prominent. As far as bourbon barrel aged beers go, this brings those tannins to the taste in the lightest of ways. They are there, but thankfully this doesn't taste like a whisky shot dropped into a cherry soda. But, this is one sweet concoction. The maple syrup makes it so, without really being a major part of the taste. It fits in subtlety, which is nice, but it also makes this a very sweet drink. In fairness, that's what probably should be expected. There's no doubt the tannins mitigate some of the sweetness and add an enjoyable layer. But, it is a sweet drink. One of the better attributes here is the mouthfeel. For all the sweetness, it's not sticky at all, in fact it's a very smooth drinking ale. That's says something for the sweetness level and 8% ABV, which is barely noticed during the tasting. This is absolutely spot on for what it strives to be. But it's hard to conceive having more than one in a single sitting. If you consider this a dessert beer to be taken in slowly as a one and done, there should be no disappointment.
Mar 29, 2022

Reviewed by Manta200 from Kentucky

3.93/5  rDev -0.3%
look: 3.75 | smell: 3.75 | taste: 4 | feel: 4 | overall: 4
Single bottle from Party Town
Pours a clear light red color with a finger thick foam cap, fair retention.
Aroma has subtle notes of cherry and bourbon.
Taste is slightly tart with sweet maple and a touch of bourbon.
Body is surprisingly medium/full with the velvet mouthfeel, as advertised.
This is a quite interesting beer, I like it!

A hit of bourbon at the front of the nose, with some maple backing it up. Just a very light grain/beer scent in the background.

On the tongue, the cherries show up to help balance out the bourbon, and the maple fades a bit. Some alcohol heat shows up as well. A hint of wood at the back of the palate.

The body was light, well carbonated, and had a sweet finish.

Drinkability was good, a sipper, not a quaffer.

Overall, a pretty nice brew. certainly worth your time if you see it.

Reviewed by Iamaskier from Idaho

4.05/5  rDev +2.8%
look: 3.75 | smell: 4.25 | taste: 4 | feel: 4 | overall: 4
Pours like a seltzer- fizzy. Red body, and quite translucent. Smell is sweet- maple, bourbon, cherry, vanilla. Taste is also quite sweet and follows the nose. Cherry, sweet at first becoming more tart, complimented by a hint of bourbon, sweet maple syrup in the body, and a final hint of vanilla. Moderate carbonation. This is a neat take! As if a sour met a barrel. If you’re not a fan of syrupy beers it’s probably not for you, but I enjoy having something different like this.
Jan 24, 2022

Appearance: The body has a pretty looking orange appearance with a hint of pink. It looks light gold around the edges of the glass and it has an overall nice opalescence. The head is short with a creamy texture and looks mostly white but when it is first poured it has a light hue of pink. Although the head is short it has good retention and leaves nice creamy lacing on the glass.

Aroma: It smells a bit like a wine barrel. There is a wet oak scent and a bit of red wine character. There is a bit of a raspberry character to the aroma.

Taste: Up front there is vanilla and sweet caramel with light notes of oak. As it goes over the tongue it picks up a bit of a fruity berry flavor. After a while it starts building up this cherry flavor which tastes a bit like the center of a cherry cordial. The back of the palate doesn't change much and the beer as a whole stays pretty sweet.

Mouthfeel: The body is light but it has this smoothness that gives it a slightly more weightier presence on the tongue than it actually seems to have. Carbonation feels great and does a good job of moving the beer around the palate. The beer trends on the sweeter side without any counteracting bitterness that is noticeable.

Overall: The beer was very enjoyable. The label states that this is a "cherry ale aged in maple syrup bourbon barrels." The barrel character comes across as oak but there is no maple syrup flavor or aroma. It could be that the maple syrup contributes sweetness to the beer but that's it. The bourbon character is also completely absent. It does have a cherry flavor which is pleasant and comes across both as candy-like and wine-like which is likely to please people who enjoy both complex and more simple cherry flavors. I would recommend it to those who like cherries and I would buy it again.

An interesting beer. Sweet & tart at the same time.

Reviewed by beerjerk666 from Florida

3.95/5  rDev +0.3%
look: 4 | smell: 4 | taste: 4 | feel: 3.5 | overall: 4
Poured from a 12 oz bottle into a Snörkel glass.
Body is reddish-brown with a full fingers worth of head. Pretty islands of lacing left inside the glass.
Aromas of oak, vanilla, cherries, bourbon.
First sip is sweet cherries and vanilla. As it warms it reveals more oak and maple.
Mouthfeel is a bit too syrupy, like cough syrup consistency.
Overall, a pretty good beer that I don't think I would really want more than one of at a time.

Rated by jkh15 from Michigan

Reviewed by 40ontarget from Colorado

4.04/5  rDev +2.5%
look: 4 | smell: 3.75 | taste: 4.25 | feel: 4 | overall: 4
Medium hazy amber with a red tint. There is a full finger of pinkish white head. The barrel and whiskey are at the forefront of the nose with vanilla leading the way. There is a bit of earthy maple and also a bready yeastiness hanging around. I didn't get a lot of cherry on the nose but I sure get it in the taste. The cherry and maple combine really well. The bourbon sneaks in with a turn of vanilla. The finish is a touch of bitter alcohol followed by a thick creamy sweetness. The nose was a bit underwhelming. However, the taste was really nice. Things all play together to make a really drinkable beer. Very sneaky in its strength!
Jan 11, 2022
Rated: 4.09 by bismarksays from Iowa