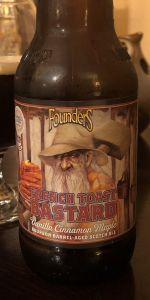 Notes: Backwoods Bastard gets the 4-star breakfast treatment. Our bourbon barrel-aged Scotch Ale is introduced to maple syrup, cinnamon, and sweet vanilla for a decadent brunch-inspired sipper. Breakfast for dinner, anyone?
View: Beers | Place Reviews
Reviews: 29 | Ratings: 81 | Log in to view all ratings and sort

Black as night with a thick beige head. Lots of lacing on the glass. Aromas of vanilla and maple syrup, reflected in the taste. Velvet on the tongue. Alcohol is not exceptionally prominent.

Taste is great following the nose rich sugary malts loads of maple flavor sweet and rich without being cloying. Just a chewy sipping master piece. Light barrel notes, loads of vanilla with light cinnamon poking out on the finish. Glad to find this on tap in our little redneck town, a treat.

Smell: Toasty, lightly fruity and sweet-smelling of maple. A bit boozy, but not in a bad way. Woodsy and spiced notes with a pleasant bourbon aroma. Great nose.

Taste: Deeply bready, toasty and decadently capped with a layer of brown sugar and drizzle of maple syrup. Touch of vanilla and nuttiness within. Sensible inclusion of warming cinnamon and spices. Lightly estery. Finished with a little tinge of heat, a bit of barrel and a rich malts.

Overall: I dare say a large bottle of this may kill a man. However, in smaller quantities, it was rather pleasant and ultimately mimicked its namesake reasonably well.

This beer was delicious. You can definitely taste the maple and vanilla to give it that French toast like effect. For the high ABV it’s very welcoming and definitely a good flavorful beer to compliment a flavorful meal like a steak dinner.

O: Probably one of the better aromas you'll ever get on a beer. This literally smells like gourmet French Toast. Yet, the flavor has a hard time following through. The biggest problem is that it's not very complex or delicate. It's basically it's components (cinnamon, vanilla, maple syrup, booze) all screaming at you equally. Almost no balance. I don't want to make it seem like I hate this beer (I don't). I just think it could have been so much better.

Recommendation: Backwoods Bastard is way better, but this unique one-off has a time and place for it somewhere.

Beautiful appearance, great head retention. Smell - pastry scotch ale? Maple, oak, plus weird artificial aroma that was in the blueberry pancakes release from Barn Town. It’s like that fake butter flavor in Aunt Jemima’s, but dialed to 11. Too much. Flavor starts out well but finishes cloying with a bit of faint heat. Aftertaste nails the French toast though. Just not sure that’s what I want dominating the flavor profile of my beer. I’d prefer “reminiscent of,” rather than in my face. EDIT: later on in the pint after warming, this beer settled down/I got drunker, and it tasted much more cohesive and sweetness mellowed. I upped the taste and mouthfeel and overall each by 0.5.

Huge maple in the nose, backed by cinnamon, vanilla and even some breadiness.

Same flavors carry over to the taste, along with some bourbon alcohol bite. The earthy hop bitterness of the base does pair particularly well with the sweetness of the rest of it though.

The French Toast here is in your face, on point, next level vanilla, maple and cinnamon sweetness. It clashes with the base, though. An example where the whole is less than the sum of its parts.

On tap at the Thirsty Moose Merrimack ($14 12 oz pour that my wife is still mad about)
Dark copper brown in color without much of a head when it got to the table. Maple and cinnamon aroma and flavor in spades. Light bready toasty brown sugary maltiness. Tasty but quite sweet IMHO.

This beer pours deep brown with ruby highlights when held to the light. It is topped with a film of tan head that leaves spotty lacing.

The smell is amazing. Maple Syrup is unmistakable. The cinnamon and vanilla compliment it beautifully. The adjuncts are the stars of the show in the aroma.

There is no doubt that the flavor elicits a piece of French toast drenched in maple syrup. I thought I got more maple syrup on tap than this bottle. There is some intense flavors here though. The maple is easily identifiable. The cinnamon is front and center as well as is the vanilla. These flavors drown out the base beer. Although the bourbon does its best to get noticed.

With the intensity of the flavors and smell one seems plenty. It is a darn good dessert beer. I am not mad about buying a six pack. I will have to spread them out.

Had on tap. Pitch brown semi-opaque body with a tan head. Smells is magical: cinnamon, maple, bourbon, sweetbread, vanilla, toffee malt, earth, and slight peat smoke. Taste is more separated with sweet elements up front and bitter on the back end, plus as it warms it starts cloying and boozier. Feel is thinner than the original, more sugary, and boozy. Leaves a warm film in the mouth. Started off strong but couldn't bring it home.

Too sweet for me, but the nose was outstanding. Vanilla and maple dominate, then cinnamon, limited barrel attributes until it warmed. Even then, still secondary to the vanilla, maple, and cinnamon.

On tap at the Speak Ez lounge in Grand Rapids

On tap at the Pour Taproom in Greenville SC.
Pours with an attractive reddish-brown body topped by a very good beige head.
Smells heavenly: like gourmet cinnamon French toast covered in maple syrup and served in a Scotch Ale brewery. As expected given the aroma, this is a sweet ale. It's not cloying and probably less sweet than it seems die to the impact of vanilla and msple syrup aromas, but still, it might not fair as well in large servings.

I have given very few "5" scores on BA in any category, but this beer truly earned it in aroma. It was sheer heaven, and the beer was great overall.

Great tasting beer. It really focuses on the syrup part of French toast which some might see as a negative but it’s still a good taste. The smell is super nice still pretty syrupy but very nice.

Beer poured brown with a nice off white head that has some very good hang time.

Nose is wonderful, truly French toast with maple, vanilla, and cinnamon shining thru.

Taste follows the nose where the base Bastard beer is infused with maple and cinnamon up front and vanilla in the back. Finishes very sweet, should be interesting to see how my palate handles 16 oz. May have to cut a bottle of Backwoods to reduce the sweetness.

Overall a very fun beer to try, glad it came to Phoenix!

L: Had this beer on-tap at The Answer Brewpub, poured into a taster. Had a brownish color with ruby tints and a mostly opaque consistency. There was a thin, off white, foamy head that quickly dissipated. Average lacing.

T: Tasted of a good amount of bourbon (and its accompanying barrel), a hint of vanilla (lingers around the edges), a ton of maple syrup (the star attraction), some cinnamon, a good shot of malt (present throughout), and a tinge of brown sugar. A sweet, slightly boozy, enjoyable flavor. Quite tasty.

F: A fair amount of carbonation with a slightly syrupy finish. Medium-bodied.

Single 12 oz bottle from the brewery store on NYE 2019. Looks the part of a malty, muddy scotch ale. Nose is off the charts for a pastry beer: total french toast. Unbelievably accurate. Taste was way too boozy, missing almost all the maltiness that provides both the soft feel and protection from the alcohol in a wee heavy.

5 oz pour on tap. Pours a dirty brown with an off-white head. Smells like maple syrup, maple, and vanilla...nice. Taste is similar but somehow a tiny bit watery (at 11%?!) and also sweeter than I'd prefer. Mouthfeel is full and creamy. Overall a decent beer but not worth the 11% abv or the extra ingredients.

Wow, great beer. Aptly named, tastes just like French toast. Striking dark brown color with sizable head that settles quickly with good lacing. Fantastic aroma of vanilla, sugar, maple, and cinnamon. Tastes like dessert. Maple is the star of the show. Tons of maple sugar, vanilla, cinnamon and oak. Notes of roasted malt, praline and bourbon. The oak flavor is too strong and tastes a bit disjointed with the other flavors, but perhaps is necessary to add interest and prevent the taste from becoming too cloying. Good chewy mouthfeel and great carbonation. Founders had a great idea to make a dessert beer out of a bastard ale. Hard to drink more than one due to the sweetness. Overall a fun beer that I’m glad exists.

A - Pours a dark reddish brown with a one finger creamy off white head. Decent amount of soapy lacing.

O - A sticky sweet version of the original.

Glass was dirty, but a couple iron-fist pounds upon the bar-top lifted the bubbles; brilliantly-clear, ruby-hued liquid; was poured with loose foam, but it crumbled quick... on the nose: pancake syrup (maple maybe), bit of vanilla, hint of spice, hint of mellow (bourbon-y) booze; just approaching the threshold of vibrant expressiveness... syrup-drenched pancake-forward flavors up front, subtle butter(scotch)y follow-through, with the vanilla, caramelized malts, and cinnamon spice slowly swelling up in the aftertaste... ultra-clean, relatively bouncy-light body, booze extremely well-tamed, slow sedation; only thing really missing was a bit of roundness and/or dextrin smear to its body... the 'Scotch ale' element painted over several times, this wasn't nearly as confection-clogged as anticipated - the only thing really missing that didn't/couldn't pin this as a 'French toast' beer was an element of skillet-toasty, grainy, melanoidin-esque malt character - way too clean, refined, mellowed out - this considered, it is/was a super-drinkable, but dangerously blindsiding brew, and it most certainly didn't pair well with the works-y 'Numero Uno' pie which I was served on the tail-end of this drop (the Miller Lite I chased it with did the trick though)... if you're a fan of Founders' brews, definitely worth seeking out - but at $10 a pour, hmm, could be a pass... (1634)