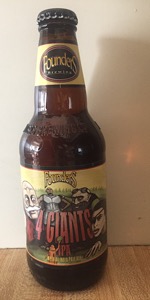 Notes: We’ve made a lot of imperial IPAs over the years and, in turn, have had a lot of arguments over which one is the absolute best. So, to settle this once and for all, our brewers mashed up four of our favorite recipes into the ultimate imperial IPA. 4 Giants boasts aggressive bitterness balanced by a malty, sweet backbone while huge aromatics come courtesy of the seven American hop varieties.

Fresh citrus, caramel and pine on the nose and palate. Semi-sweet with a nice bitter finish that helps balance.

I really enjoyed this one. Founders is hit and miss with their IPA game but this one hits the mark. I will definitely be revisiting often. Recommended.

12oz bottle courtesy of Whyteboar. According to the stamp on the rear label, this was bottled on March 10, 2020.

Poured into a Mad Bomber IPA glass (I really need a couple of the Spiegelau [?] glasses), this was a clear, dark gold/orange shade of amber, with a good-sized off-white head that left plenty of lace.

Grapefruity and piney hop nose, but a little subdued. I detect a good-sized bready malt backbone as well, to be expected from a midwest IIPA.

More hop forward than the nose suggested. In addition to the citrusy and piney hoppiness noted in the nose, there's also a bit of melon and tropical fruit-like flavors. The bready, malt backbone is substantial, but the initial hop blast balances it better than I expected from the aroma, so things remain dank and delicious for a hophead like me. Bitter, resiny finish.

This might be my first IIPA from Founders, and I like it a lot. Really enjoying it as a post-lunch, pre-dinner beer. Thanks, Craig!

Bottle dated 3/10:
A lovely dark golden to copper color indicating the use of some darker malts. The clarity is refreshing, and the head builds up well - its remnants are washed away on my first sip.

Nose is floral and citrusy, with a toasty malt presence and something else that I'm thinking is along the lines of strawberry. Taste has a similar vibe with the toasted malts and strawberry-ish sweet fruit note laying the groundwork. The bittering agents tread lightly upon this ground at first - a little peach and grass. The hops get bolder before the end of the taste, though they don't overpower the beer. A mélange of citrus, grass, pine, strawberry, and malt notes close the taste, without any single note taking the lead.

This, to me, is a nicely put together beer. It has the maltiness that comes with a 9% beer, but the counter-bitterness constrains it nicely. The volume of alcohol is similarly constrained, leading to a very enjoyable feel. I am quite happy with this beer.

Notes via stream of consciousness: It's poured a just slightly hazy amber colored body beneath a short head of slightly off-white foam. The aroma combines bready, sweetish, and gently caramelish malt with resinous, herbal, fruity, and even piney hops. On to the flavor... well the aroma hasn't misguided us. In addition to what we've found there there's a thin bit of lemony citrus that helps to cut through the malt and also helps to balance it along with a solid bitterness. It finishes dry and herbal once the malt fades. What else is there? It's a little bit hard to tell to be honest. There's a lot going on but it's not quite clear, it's all bundled up together. There's a spiciness that's like rye, and it seems there's some darker malt in the mix as well, maybe a touch of chocolate and perhaps even some roasted barely. You don't really get them clearly but you can sense that there's something in there. I'm getting a bit of dankness from the hops as well, and that works really well with the rest of what's there. Any more fruits? Yeah, there's something there, again, but I can't really make it out. It's kind of like soft apricot and dull pineapple mixed. Maybe nectarine. It's interesting because it's so complicated and yet it doesn't come off like that, at least not without really looking into it. So what else? The alcohol is surprisingly well cloaked at 9.2%. You have a sense of it, as you should with a strong beer, but it keeps itself towards the back and sides of the stage. The head didn't show a whole lot of promise at first, and to a certain extent that's common with stronger beers, but this has actually held up well in the end. The lacing could have been better, but you can't have everything can you? In the mouth it's medium bodied but dextrinous and on the edge of being medium-full. Standard carbonation level. So, what to say in the end? Here you have a strong IPA with a solid bitterness that's like a hit to the shoulder rather than a brash punch to the face. It's rich but not overly so (I've basically finished my glass and I could have another one if I wanted to although that alcohol is sneaking up on me). It's also complex but in a really interesting way, which is nice. I often like to have a strong, malty beer at the end of the night as a sipper while reading before bed, usually a barleywine, but this would work well and make an interesting twist as well. It's a kind of a sipper, or at least a beer that you should drink more slowly, but at least in the beginning it doesn't really come off like that. It's certainly worth trying!
Review #7,018

Pours a clear golden honey color with a coupla fingers worth of velvety white head. Smells piney with mild fruit notes, apple in particular. Tastes... I dunno, real fucking bitter. Not crazy about this; its just way too bitter (or "aggressively" bitter as the label boasts) for my tastebuds. 80 IBUs, for whatever that's worth - not a whole lot from where I sit.

I am surprised at the lack of significant smell on this one, but all the other factors are top notch. Pretty tasty for an old school American imperial IPA.

The pour is perfectly clear light copper, an IPA color that is now being bred in special tanks as its population in the wild declines alarmingly.

4 Giants – the base malt here must be Nostalgia 37. First noticed is the thickness, with a viscous body more reminiscent of tree sap than beer. Massive jolt of caramel base is ridden by a jockey of slow building pine & enough bitterness to let you know this isn’t a kiddie beer. The ABV prevents this from hitting session territory, but hey, one could try.

Lovely. This is a simple, direct, tasty-as-hell throwback to a time when beers didn’t have to taste like nineteen different fruits dipped in sugar. Excellent beer.

12oz bottle. Poured out a clear, golden amber color with a small, off-white head of foam. It smelled of pine, toasted caramel and citrus. Sweet caramel and toffee taste with a bold piney bitterness.

Bottle from Whole Foods.
Deep golden bordering on copper with a huge off white head that persists. Citrus and dank pint with a bit of watering alcohol. Pretty old school lots of tangerine and grapefruit.

From the bottle it pours a clear golden amber color. A moderate head eventually dissipates and yields rings of sudsy lacing.

The nose is truly classic with old school hops aromas that are both citrusy and dank. There are notes of grapefruit, tangerine and orange, along with a generous dose of pine resin. The malt aromas evoke cookie dough and graham cracker.

The taste opens up with full, chewy and doughy malts that yield a biscuity and caramel sweetness. However, it is soon apparent how balanced this DIPA is, as big juicy notes of grapefruit rind, a touch of tropical fruit, and pine resin interact nicely with the malts. The bitterness, earthy, dank and resiny, adds a nice prickle to the tongue and does wonders for the drinkability.

This beer is full bodied and smooth. The carbonation is moderate to slightly crisp, while the big hops flavors add a nice prickle. The finish is long with a resiny and bitter linger. Well balanced between the hops and big malt presence. The ABV is so well hidden making this dangerously drinkable.

A fantastic full flavored DIPA filled with old school herbaceous and citrusy flavors along with a big malt body. Described as a blend of 4 Founders DIPAs, I recognize Double Trouble, from the label art, as one of the blends; really curious as to what the other 3 are.