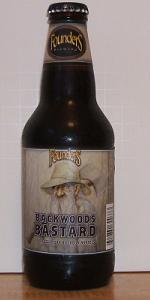 L: Pours a very unique & cloudy amber/ruby color with a thin beige head that leaves fairly quickly.
S: Smells sweet like caramel, molasses, dried fruit, & roasted malts; has boozy aromas of scotch as well.
T: The oak aged whiskey taste is really upfront & then it mellows out with the flavors of fruit & roasted malts.
F: Medium-bodied with a heavy/chewy fill to it; super boozy finish.
O: One of the best beers of its style.

Overall: this may be my favorite beer.

Had this last night with a Cardhu single malt scotch chaser and listening to Grateful Dead May 1977 box set. Very tasty. Big flavor ale yet complex enough not to be a bore. Held its own with the scotch. Sweet & savory. Kinda of a mix of Samichlaus Malt Liquor and the Guinness Foreign Extra stout. Reminds me of Innis & Gunn 's Irish Whiskey Aged Scottish Stout but bigger more complex flavor. More spice, and blends with the extra alcohol very well. Not very heavy if at all. I first had it a couple of months ago in summer. Liked it then and now with the cooler evenings. I also enjoy lagers, pilsners & IPAs so if you are in to expanding your range this will spark a bit of interest, though it is in the porter/ale/stout family of taste. Cheers & enjoy.

This is everything the description says on the bottle and doesn't disappoint. The flavor is awesome, very Scotchy, fruits and boozy. The only thing it is lacking is maybe the color is just meh. Cellar it or buy one that is a year old and you have some awesome.

Pours a beautiful hazy brown with a thinner but rich head. The aroma is spectacular: rich, oak, malty, and light spice, smoke and dark fruit. The flavor is a lovely balance between of malty flavors and that oak barrel. It fades to the sweeter notes of Spice and dried fruit. Amazing.

Wow. Maybe I’m so high on this one because it’s my first “world class”
Beer. If you’re a fan of bourbon whiskey, scotch whiskey, caramel and smoky flavor then do yourself a favor and try this if you get the chance. I can’t speak highly enough of this beer. It’s for sure a sipper and trust me you wont want its flavors to go away anytime soon. A dark pour with excellent lacing. I wish I could upload a photo of the lacing from this beer. The hops are excellent, not overbearing and maybe that’s because of the sweet taste of being aged in bourbon barrels. 5/5. Will buy again and again.

I like this bastard: pours dark brown with good head, and some lacing. Smells like whiskey, fig, raisins, malt and surprise! it tastes pretty much the same with a dash of vanilla. Warming, but no alcohol detected despite the abv so it’s a real smooth operator as well. Love this beer and it’s a great way to get a snoot of bourbon without actually drinking some. Bravo Founders!

Poured from a 12 ounce bottle into a snifter.

This is not a just a beer, this is a piece of art, strong bourbon presence, cocoa, brown sugar, vanilla and wood. If you like bourbon and beer, you’ll love this one.

Looks like a 2020 bottle, big mocha head, plenty of carbonation still. Smells like a sweet raisin bread, with hints of vanilla, aromatic hops, and metallic booze. Taste is spicy with alcohol and what's left of the hops at first, then it goes into malt mode - the flavors have mellowed and congealed over time, like if you refined that same bread from the nose into a diamond bullet of flavor. Dark fruits and chocolate dominate, then the booze and oak (which have fused to become one) come in to balance the sweetness, finally a kiss of hops: all this sits on your tongue for minutes afterward; sip it.

Ageing this beer makes it into twice the beer it once was. I'll only have my bastard aged from now on

Medium light carbonation with just above average body.
Aroma is malt,brown sugar,dark fruit,,grainy doughy fruit cake. And molasses. A little earthy and definitely wood
Taste is dark fruit, malt,alcohol, molasses. And a sweet sugary bourbon taste that lingers
Overall it's a really well done beer that if this is a style you like it's worth trying

Deep amber with a fluffy butterscotch head. Caramel, toffee, vanilla, some coffee, big bourbon and scotch flavors and aromas. Boozy, not overwhelming but warming, full and viscous, semi-sweet. Very nice for something you can pick up pretty readily. Politics aside, worth a try.

The look of the beer reminded me of a black tea brown. It was clear and had a khaki colored head half finger thick head which had a medium retention to it.

On the nose, I felt that this was very barrel forward giving large bourbon and oak characters. Having spicy, oat bread-y, toasted oat, leathery, musty, and a bit of dark fruit, the aroma definitely gives the impression that this beer is big, bold, boozy, and earthy.

The taste follows pretty much everything described on the nose. There was a big boozy bourbon taste upfront which was coupled with the caramel sweetness of the malts. The middle highlighted more of the oak, musty, and leathery qualities which then developed into a bourbon bitterness which I found to be mellow and not overly harsh. The flavors were definitely very bold, robust, and spicy which makes for a very complex brew.

This definitely had a medium to full body to it and a medium amount of carbonation. The flavors of the oak and bourbon were very prominent and it definitely didn't hide the fact that it was a big and boozy beer. Despite this, I thought it was pretty smooth for the relatively high ABV it had.

Overall, I felt like this was a decent beer to me and a really good representation of the scotch ale style. Although I'm not a huge fan personally of the flavor profiles and aromas that were dominant in this beer, I felt like it did a good job in accomplishing what it's supposed to be.

Pours a slightly murky reddish brown with a finger of tan head that fades to a ring, no lacing

Taste is really similar to the nose, more bourbon here, some more chocolate and vanilla notes too. The darker fruit comes out stronger here too, very malty sweet

Not too much carbonation on here but it lends to a nice, slick mouthfeel. Heavy body and finishes sweet, absolutely decadent

Wow, this was my first scotch ale, it's the top rated of the style, and I absolutely love it. Sweet and rich, this is a great dessert and alternative to an imperial stout. Picking this one up often

What a delight! Founders brewers know how to make beer right! This one is smooth and intoxicating at the same time. I just love the layer of flavors and the intoxicating punch! Founders rock!

Pours a clear brownish red with minimal head. Scent is equal parts sweet and bourbon. Taste mimics the scent. Full mouthfeel and an aftertaste dominated by the bourbon. This is an outstanding brew, but it is not one I would want more than one of during a sitting.

This barrel aged ale is worth the premium price not so much for the ABV but the overall feel and taste...of course the mellow uplift is fantastic value add...just bought my second four pack...many more to come

In a blind taste test I am not sure I could tell this apart from any number of other barrel-aged strong ales. The mouthfeel is full, and the taste is of raisin and some spice. There is a sweetness that seems indeterminate in origin. I mostly penalize this for failing to live up to its claims on nose and palate-exciting-ness.

12 Oz bottle poured into glass
Look - dark red and brown color, small foam head with a film that stays on top
Smell - certainly lots of scotch character, smoky and caramel. Some brown sugar.
Taste - Medium roasted malts, smoked red cherries, burnt caramel, some red ale characteristics with sweetness. It really does have lots of bourbon and scotch alcohol flavor which to me, makes it unique. Body is heavy and carbonation is medium-low. A great sipper but very easy to drink these in excess.

Overall, these beers are so enjoyable because they blend beer with whiskey which i think is a good combination of flavors and the smokiness warms you up so especially great at this time of year. Grade is an A

Aroma: Strong aromas of bourbon followed by oaky and bitter grains. Hints of vanilla. Not much caramel on the nose. A vanilla sweet cream lingers on the back end. As the beer warms more bourbon, oak, and vanilla.(3.75)

Flavor: Strong boozy bourbon upfront. Then some bitter grains follow. A caramel sweetness presents itself. You think there is no vanilla, but then a sweet cream and vanilla lingers on the back end to finish sweet with the caramel and cherry vanilla. Finishes sweet and boozy. The bourbon prevents any dark fruit and complexity in the flavor that I detected in the Dirty Bastard. (3.25)

Feel: Heavier bodied. Carbonated-but the syrup envelopes the bubbles so that this feels heavy and sticky on the palate. A boozy and sweet cream vanilla lingers. (3.25)

Overall: This beer is what it is. At 1/4 the alcohol and probably 4x the sugar of bourbon, this is the highest rated Scotch/WeeHeavy on BeerAdvocate so it deserved a review. It depends what you're looking for. I drink beer for the beer and not for the bourbon and booze. Lots of flavor, but if I wanted bourbon I would drink bourbon. This one doesn't do it for me. I'm sure it's a World-Class beer, but for me it doesn't hit the spot. I'll stick to what I call beer. (Final Rating: 3.43)

The body is a dark blackish-brown color with a thick lather of dark khaki foam that lids the glass. Some intermittent swaths of lace action noted. The nose brings an incredibly deep dark caramel nougat rich with fig and date. Very reminiscent of a raisin bread. Vanilla and caramel malt is pronounced in the flavor with an earthy hop bitterness and a touch of chocolate roast noted in the finish. This brew is boozy and fiery but in a very good way. Not overly hot.
All in all not a ton of barrel notes too me but wow what a fantastic brew!
Founders does amazing BA beers.

Thank you Founders for bringing your distro to SoCal.


Backwoods Bastard from Founders Brewing Company
Beer rating: 97 out of 100 with 8778 ratings