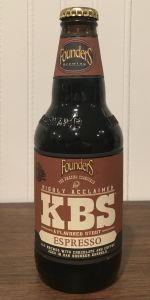 Notes: KBS gets its coffee fix in the very first variant to come from our beloved bourbon barrel-aged stout. Yes, KBS may already be brewed with coffee, but it gets some extra oomph when it’s aged on espresso beans after being removed from barrels. The result is a fresh and snappy coffee twist on our classic barrel-aged beer. Who says you can’t start your day with a barrel-aged stout?
View: Beers | Place Reviews
Reviews: 135 | Ratings: 386 | Log in to view all ratings and sort
Reviews by SierraNevallagash:

Pours absolutely black as jet night, with nearly four fingers of light mocha head that builds up like a dusty cloud, and holds its place for ages before eventually settling down to a film with a massive collar and very tenacious lacing.

Palate: This roasty behemoth greets the palate with a surprisingly restrained sweetness. It's certainly sweet and malty, but it's a mere sliver of the sweetness that CBS has, and from my memory, regular KBS was also a bit sweeter. Big dark malt sets the foundation immediately with some blackened roast quality. Coffee roast, bakers chocolate, and barrel char play supporting roles as well, setting the overall tone of the beer. Past the whole bombardment of all things dark, there are lighter notes of molasses, burned toffee, brown sugar, sweetened dark chocolate, and vanilla serve to add nuance and gradient layers. After this, we swallow, and the first thing to surface is a beautiful sweet, oaky bourbon presence. At this point, we're essentially into the finish, where a bunch of vanilla shows up, as well as toasted oak and caramel, before things take a turn back in the direction of roasty. Bitter cacao, fresh dark/espresso roast coffee grounds, black charred malt, and barrel char all serve to establish a big, bold, roasty, charry, dark finish with multiple sources of bitterness. Coffee and blackened malt lingers on and on.

Mouthfeel/Body: The beer is certainly full-bodied and rich, with a typical barrel-aged stout slickness to it, but it's far from fudgy or viscous. It doesn't put up a fight like most high ABV barrel-aged dark beers. If you chew it a bit, it does get slightly thick, but that's mostly due to the fine effervescence, which is low, naturally, but somewhat lively for the style. Wet up front, wet in the middle, and semi-dry in the finish, with drying roast qualities. Some ABV heat in the swallow, and throughout the palate.

Overall: KBS Espresso is everything you'd expect it to be. It very much mirrors its namesake base beer, but is just stuffed to the brim with fresh, roasty coffee. I normally (personally) prefer sweeter, thicker, fudgy barrel-aged ales, but I find the coffee actually increases the overall drinkabikity of this one, and in this particular case, I actually think that increased drinkabikity works in its favour. It's still one to sit down with, but the fact that it doesn't fight back in any way makes the whole sipping experience that much more enjoyable.

Tastes of a good espresso and a dam good stout. The chocolate and oak takes a back seat but this time that's a good thing. I will definitely buy this again.

This beer pours black and is topped with less than an inch of mocha head that leaves spotty lacing.

The smell is coffee forward. I get some anise. There are hints of chocolate and roasted malt.

The taste is smoother than the smell. It starts out with espresso and chocolate. The espresso lingers throughout. There is some black coffee in the finish.

This is another excellent beer from San Miguel. I don't think it a whole lot different than regular KBS though. I will follow up with one to confirm/deny my statement.

Pours black with a one finger tan head which has very good retention. I drank a few of these before reviewing this bottle. At first the aroma and taste had nothing but Espresso. Now the dominant aroma is still espresso, but I can also smell cocoa, chocolate, and dark roasted malt. I do not pick up any Bourbon from the aroma. Espresso is the dominant taste, but I can also detect cocoa, chocolate, dark roasted malt, a little of the Bourbon, molasses, and vanilla. full bodied with moderate carbonation. Has a bitter aftertaste which is somewhat balanced out by the sweet chocolate. Overall an excellent beer.

KBS "on steroids." Pitch black opaque beer with very little head but good nose and BIG flavor. Coffee very prominent with good body. Not as thick as a Bourbon county but just right for me. Long finish. Excellent

A bit boozey, but espresso is rich and full-bodied, nice chocolate undernote

Taste brings a level mocha coffee dominating the profile as waves of smooth chocolate and vanilla bean guide into a more roasted malt finish accompanied by a touch of bourbon cream sweetness.

Mouthfeel has a medium body, slightly slick and with a moderate-light carbonation; deepens to a silkier tone on the mid-palate as a mild roasty grit sets in toward the finish, minimal alcohol presence can be detected in a balanced yet robust swallow.

Intense, focused, and maybe a bit one-dimensional (similar to the base beer), this brew exchanges fudgy malt character for a more pronounced espresso char. While I'm enjoying the more expressive coffee in this KBS variant, I am finding it struggles to truly differentiate itself from its base, leaving me quite satisfied yet still wishing for a brew that extended itself just a little further.

Bottle from Harvest Market
Solid black with a thin tan head that shows light retention. Huge coffee aroma and flavor with the same chocolate sugary sweetness and oaky alcohol as the original. The Espresso is strong but seems to tame the alcohol notes I usually get from this brew. Nice brew.

Poured from a 12 oz bottle into the test glass
A - Nearly black backdrop, with some coaxing a nice mocha colored froth tops the offering
S - Sweet coffee, espresso for certain, some cocoa notes are on the dark side, a bit of vanilla, char and ash.
T - Coffee anyone, dark chocolate, a bit of boozy bourbon, more char, with some cigar tobacco
M - A bit thin, sharp on the palate, with carbonation doing a nice job cleaning up. Linger is dry and coffee.
O - A very good offering, one that delivers on the labels promise.

Founders KBS Espresso, 12% ABV. Pours thick and black with a 2+ finger brown head that left ample lacing. Nose is all espresso, flavor follows, with moderate bitterness. Excellent mouthfeel, overall world-class. I like this better than regular KBS, though I wonder how they will be when the coffee falls off.