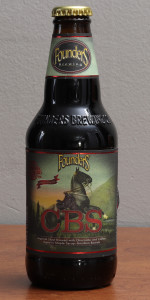 Notes: Canadian Breakfast Stout (CBS) is the epitome of why we launched the Backstage Series: to bring some of our most sought-after beers, which have been available primarily at the taproom or at a few select events, to a much larger audience.

Canadian Breakfast Stout is an Imperial Stout brewed with a blend of coffees and imported chocolates, then aged in spent bourbon barrels that have most recently been aging pure Michigan maple syrup.

Reviewed by Roy_Hobbs from Connecticut

Reviewed by erosier from Connecticut

Reviewed by Emichaelbray from Pennsylvania

L: probably should be higher but I don’t see it fundamental difference between this and something 25% of the price.
S: the best part. Very complex and interesting. The maple syrup and cocoa are strong but, to my nose, there’s a wonderful rye whiskey spice here.
T: follows the nose to an extent but not as good as I remember. Same stuff happening but kinda stunted.
F: oh yeah, no doubt this is barrel-aged. Filling, low carbonation, boozy almost chewy.
O: the 100 rating is insane. I have had far superior beers for less.

Smooth with a hint of sweetness. ( Maybe only negative - a bit too sweet. )

Rated by pdalton36 from Maryland

Reviewed by mpruden from Ohio

Overall: This was a near perfect marathon training recovery drink!

Reviewed by Eddieeight from Ohio

2.61/5  rDev -43.8%
look: 3 | smell: 2 | taste: 2.5 | feel: 4 | overall: 2.75
Obtained a 4 pack for $35 at my local stout store. Couldn't believe they had it, i haven't seen it anywhere else, so even though there was a steep price to pay i just had to try it. Poured out a deep dark brown with a light tan head that lingered long after i poured it. In fact, several minutes after i poured it there remained a frothy loft of bubbles just waiting for me to taste it. Smell is not too strong. Not strong at all in fact. Very weak. Not what I look for in a beer. I usually want at least some kind of scent, but i've poured this into a snifter and swirled it around a good deal and still receive barely anything. Am i losing my sense of taste or have i just become accustomed to stronger beers? Well whatever nevermind i'll try a sip. A little bit of nuttiness, a little bit of caramel and toffee, a little bit of molasses, a little bit of coffee, a little bit of chocolate, but it's all just a little bit. i'm not certain what's supposed to be the dominant note here. i don't really get what they're truly going for. Usually there should be at least one taste that's predominant, but i'm getting a flat wash of not really much of anything except muted tones of what it claims to have. Aged on maple syrup it says, bourbon it says, well hell i'm not getting much of either. There is a sweetness to it, but it's kind of a flavorless sweetness. Did i get a bad bottle? How could this be rated a 100? I look for deep, dark, strong, bold flavors and this has none of that. Mouthfeel is light and sparkly, probably the best part about this beer. Overall, i'm rather disappointed. I can't believe i spent so much on this flavorless effort. I've had a LOT of brews that have been barrel aged, flavored with coffee and chocolate and maple syrup, but this just doesn't deliver. What's the hype? I'll stick to Hoppin Frog who knows how to get it right. I thought this would be a smooth slow sipper but i'm tempted now to just slam it, get the buzz, and call it a night. So disappointed. Ah well.
Jan 09, 2022

Reviewed by jackflaps from Pennsylvania

L: Very dark brown, almost black. Small head that settled quickly; very little lacing.
S: Low aroma, mainly of bourbon. The barrel is here but it's more oak than maple syrup. A little roasty, too.
T: Very sweet, but balances really well with the malt and the bourbon heat. I remember this being too much maple when it was new but after two years it's almost perfectly balanced.
F: Thick, a little bitter at the back. Boozy but not overwhelmingly so.
O: Might be the best of the Breakfast Stout variants.

Reviewed by far333 from Connecticut

Rated by 13adam13 from Kentucky

Reviewed by Chocolatefreak from Tennessee