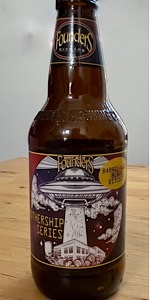 Notes: Years ago, we found ourselves sitting on a surplus of Biscuit malt and molasses. As brewers often do, we got creative and designed a beer that put these stellar ingredients to good use. We added some chocolate malt for color and flavor depth and aged the beer in maple syrup bourbon barrels and a legend was born. Barrel-Aged Black Biscuit is back. Believe the hype.
View: More Beers | Place Reviews
Recent ratings and reviews. | Log in to view more ratings + sorting options.
Rated: 4.21 by not2quick from Missouri

The aroma is barrel forward with bourbon complimented by molasses and chocolate. Really wonderful.

Taste follows nose as the barrel dominates but doesn’t hide the chocolate and molasses. Despite the high ABV, the alcohol is more felt than tasted. No discernible hop bitterness.

Mouthfeel is pleasant but less than stout level. Carbonation is minimal.

Another winner from Founders that should please bourbon fans.

4.59/5  rDev +2.7%
look: 4.25 | smell: 4.5 | taste: 4.75 | feel: 4.5 | overall: 4.5
Pours pitch black and a mocha colored head grows quickly to fill the glass and dissipated very slowly.
The aroma spoke of figs and molasses and biscuits, amazing.
The taste followed, but holy cow, why isn’t this bottled for sale? The depth of the flavor is outstanding.
The feel is reminiscent of a BBA stout, viscous and somewhat slick. It fits.
My only regret is that I am drinking this crowler alone, Founder’s, please bottle this!

A: Pours black, just like the name. No light getting through. Nice, light tan head that laces around the edges.

S: Huge biscuit malt up front, followed by some vanilla, molasses, oak. Maple and bourbon are there, but relegated a little to the back with the huge malt bill.

T: Big roasted malts up front, mixed with sweet molasses, fig, chocolate. Some maple sweetness on the finish with just a hint of bourbon.

M: Very thick and full, perfect carbonation. ABV right where I would expect it to be.

O: Alright, let's talk about Black Biscuit. There may not be a more legendary, mysterious, or even sought-after beer than Black Biscuit. Now I know what you're thinking: "Hey, Founder's isn't good anymore." And that's fine. They've taken some heat for several reasons. But let's face it, they are one of the original breweries that exploded craft beer and BA beers onto the scene. So let's time travel back to ca. 2009-10. Craft beer and BA stouts arejust starting to get hot (but not impossible to get). CBS in bottles is a year away. KBS is getting super popular, but you don't have to wait overnight to get it just yet. Goose Island is making it's name with BCBS and about to drop some variants for the first time ever. And then there's Founder's with Black Biscuit. I'll admit, I never had Black Biscuit back in the day. Today is my first time. I had just missed those early days, jumping on board around KBS 2012. But as those early years went by, one beer stood out to me that you only heard about in passing, or murmurs, or the stray BA post. It wasn't KBS, or CBS, or Blushing Monk. It was Black Biscuit. It was around for such a short period of time, but gained such praise by word of mouth. The reviews on here are so interesting, you can just feel the craft beer craze starting. Over 90% of them are from out of the state of Michigan though. Did they only distribute this beer out of state to get hype? Is that why they never bottled it? I have no idea. The lore behind this beer is amazing. So fast forward to 2021. It's Black Friday. Founder's needs to shake it up. Enter: Black Biscuit v 2.0. The naming of this beer is odd: B.A. Black Biscuit. Almost a misnomer? It's like saying BA CBS, right? I'm pretty sure the OG beer was maple syrup BA to begin with, but then again, there's such little info on this beer, who's to know for sure. So okay, what about the beer? Is it any good? Well, I'm here to say, yes. A resounding yes. Now, I know this beer would be wildly more popular if it dropped in, say, 2015. And I know these barrels and even the recipe may be slightly tweaked. But this is as close as it's gonna get, and it's fantastic. An old ale is such an interesting style, but it really works here. An obvious comparison point would be Kuhnenn's BA 4D, but this is way maltier and darker, almost drinks like a stout or porter. It's really like a less sweet CBS with a heavier malt bill and some molasses. Mouthfeel is fantastic. This truly is transporting me back to the first time I had CBS, sitting in the GR tap room. I can just feel the energy when I drink this beer. Is it world-class? Yes. Does it deserve the hype it's gained over 10+ years? Yes. Is it the best beer I've ever had? No. But I can't tell you how happy I am to finally be drinking this. It is probably THE whale for me. One that I honestly thought I'd never get to try. So thank you Founder's for this Black Friday surprise, and please bottle this for the Bottle Shop Series next year. Or don't, and just build the hype even more.

Recommendation: See a lot of people ISO for crowlers of this, and even the rare bottle (Mug club only?). So lucky to live close to the Detroit tap room where this is sitting on tap day after day. Should you trade your first born for it? No. But I would seriously consider going above and beyond to get this beer, it's that good.