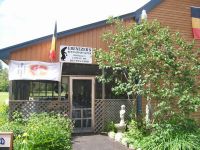 View: Place Reviews
Reviews: 126 | Ratings: 161 | Log in to view all ratings and sort
Reviews by parris:

After having wanted to visit Ebenezer's for a long, long time, I finally got the chance while on vacation nearby.

The ambience of this place is good. We had perfect weather and sat in the screened-in porch overlooking the golf course; the picnic grove vibe and pastoral setting was reminiscent of a brewery tasting room from a small Belgian town. Our server was accommodating and helpful.

As for the beer, the draft list is quite good, and I was happy to see it focused on Belgian beer. It is definitely a draft list that someone takes time and effort to curate. However, a trip to Ebenezer's is supposed to be all about their cellar, but they apparently don't sell beer out of the cellar any more because we were directed to a cooler for bottles, which had a rather small and haphazard selection of mostly easily obtainable beers. No rarities or aged beers in sight, and no cellar list from which to order any such beer. This is simply not what one expects from a place who claims to be a top 10 global beer destination, particularly since the deep cellar is what they are known for.

The food was the other letdown. My fish and chips were delicious, as were the calamari and wings we ordered as an appetizer. However - they were out of mussels! A Belgian beer bar running out of mussels is totally unacceptable. Three members of our party were unable to get what they wanted for dinner because of this. I understand that sometimes restaurants run out of things, but this was 5 PM on a Saturday, the day before the enormous Fryeburg Fair was opening just down the road, and they were out of what is a signature entree for a Belgian beer bar.

Between the running out of mussels and the mediocre bottle list with no cellar access, this very much has the feel of a place coasting on its reputation, rather than one striving to deliver a top 10 in the world drinking experience. It's worth going to if you're in the area, but if I made a special trip to go here I would have been extremely disappointed. It's crossed off my bucket list and I will not be going back.

Took a long overdue trip to Ebenzer's this past Saturday. Arrived around 12:30pm and sat at the bar. The place wasn't too crowded, several parties sitting out in the screened-in entrance area and two others at the bar. Things picked up around 1:30 then died back down about an hour later.

Selection was good, lots of Lively drafts with a good mix of European brews. Cooler was impressively stocked with trappists, 3F, Fantome, Italian and German selections. Shared a 750mL of 3F Oude Geuze with my buddy, served in a lambic basket.

Food was decent. I ordered the fried cod sandwich which was a bit mushy. My friend was raving about his sous-vide chicken, however. Frites were average.

My major issue was the amount of horse flies buzzing around the place. You'd expect to see maybe a few in the hot summer months, but they were EVERYWHERE.

Nothing to say except, WOW. The best selection in the USA. Easily some of the rarest and most amazing Belgian beers I have ever laid eyes on. Go for the beer, stay for the food, it also does not disappoint.
And some day I will attend Night of the Great Thirst, then my life will be complete....

A lot has been said about Ebenezers and I will echo it. This is a world class bar. The atmosphere is warm and welcoming. We sat in what appeared to be a screened in porch with an excellent view of a golf course. The sounds of birds and the fresh air provided a pleasant atmosphere. The food was amazing. I had a Philly cheese steak with frites. Despite having this dish hundreds of times, Ebenezers put a twist on it and it felt as though I had not had it before. Excellent food. My wife had a farm fresh chicken sandwich that was also excellent. We had two waitresses during our visit with the second one being a lot more helpful and knowledgeable. Outside of that our experience was fantastic. Beer variety and tap list was amazing. This place deserves its reputation as being one of the best beer bars in America. Certainly will go back if I am in the area again.

Visited here over the summer. It may have been a busy day, but the service was terrible. The staff was unwilling to serve us bottles from the cellar and continued to insist we order tap beers or bottles from the cooler. We had a reservation and still had to wait 30 minutes to sit down, even though our table was empty and clean. The food was slow to come out, and the staff was openly being disciplined by management in the dining room. This certainly did not live up to the hype for me. All that beer down in the cellar doesn't do anyone any good if you can't order any of it.

Simply amazing. We had 5 small children with us and we were so very well taken care of given our crew. The beer selection, knowledgeable and friendly staff ( Sir Chris et al), and the location in picturesque Western Maine (on the fringes of the Saco River and the White Mountains) made it surpassingly enjoyable.