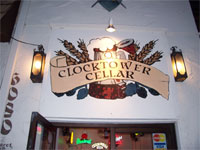 Probably 25-30 taps including several locally brewed selections from Mammoth Brewing as well as other fine mostly-California beers. Knew I would like the place when I walked in and heard Uncle Tupelo playing on the jukebox - excellent and eclectic music selection.

Bar not crowded due to being off-season at a ski resort but friendly outdoorsy types made up the congregation. Server was attentive and knowledgable. When I asked for a Green Flash West Coast it poured with heavy sediment so he gave me a Hop Head Red instead, gratis. Great whiskey selection as well.

Smallish place in the cellar of a hotel with fooseball and other games. Bar seating for maybe 20 and maybe 10 tables as well. Aprox 30 taps of freshies with draught list available, so sharpen your eyes for scoping out the tap handles. A seperate bottle list is available as well as some pub grub which is pretty tasty. The burger features a "pretzel roll" which is pretty tasty.
Green Flash IIPA, Lagunitas IPA, Booneville IPA, as well as a few of the local Mammoth brews on tap. Plenty of selection for everyone.

This is a fun, lively place which is clearly a local hangout with great beer.

Reviewed by magictrokini from California

4.28/5  rDev +2.6%
vibe: 4 | quality: 4 | service: 4.5 | selection: 4.5
The best bar in Mammoth. In the cellar of the Alpenhof Hotel, right across from the Canyon Lodge gondola. Laid-back vibe with plenty of seating, great jukebox, and nice bartenders. Big tap selection, maybe between 20-25?. Usual macros, but a great mix of Mammoth beers and micros from Nor-Cal. Some SoCal beer sneak in along with Oregon and Northwest products. Bigger selection of bottles ranging from Aecht Schlerenka, to Humboldt, to plenty of Belgians and Germans. Can always find something interesting or new to try. Bartenders know what they are talking about. Prices are cheap.
Dec 17, 2008

Reviewed by HalfFull from California

4/5  rDev -4.1%
vibe: 4 | quality: 4 | service: 4 | selection: 4
Love this place, though nobody I travel with seems to get it, be it Summer or Winter. A classic locals bar positioned neatly between Whiskey Creek and my usual rental condo.

Thirty or so taps, some bottle options and a pool table or two amidst it all. Generally see a Ballast Point or Stone option on the list to comfort the San Diego traveller. Usually a couple options from Mammoth Brewing next door as well as other Nocal/NoWest options.

I can't imagine a trip to Mammoth without dropping into the cellar...Well worth a visit..

4/5  rDev -4.1%
vibe: 4 | quality: 4 | service: 4 | selection: 4
The Clocktower Cellar Pub is situated in the Alpenhof Lodge on Minaret Road, yards away from the junction with Main Street, and literally spitting distance from the Mammoth Brewing / Whisky Creek Restaurant establishment.

The entrance is located at the base of the clocktower to which the title refers. A wide wooden staircase brings you down into this cellar bar. Comprised of a large divided room, the feel is instantly of a Pub set up.

As you get at the foot of the stairs they kick right and bring you into an open area. A series of neatly arranged whicker furniture and sofas greet you. A half wall behind this seating hides a separate area with a Pool Table. Once inside, the main bar is in front of you against the right hand side wall, it is self contained and sits neatly in the corner. A small archway to the right of the bar leads off to the toilets. A CD Jukebox sits against the front wall and has some killer tunes on it. Lots of snow related memorabilia as well as a fare share of breweriana too, in fact the walls are brightly adorned with many a brewery poster and sign. A few small TVs are complemented by a lone large screen affair, they were showing hunting programs whilst I was there. A couple of those Anheuser-Busch Clydesdale drawn carriage models dangle from the ceiling and could fool one into thinking that the bar just sells stuff from the big boys. Not so!

Thirty One (31) Taps are dotted about the bar. Four large German style beer fonts dispense around a dozen brews whilst the rest of the taps are set behind the bar area in two separate banks. The selection is interesting, there are of course the usual suspects for the Après-Ski crowd but the craft beer lover is equally catered for. I tried the Sierra Nevada Brown Ale as well a Ballast Point Big Eye IPA, both were fresh and served in excellent condition. In addition to the draft beers, a small but nice selection of bottled beers complements and brings the total of beers on sale to around 50 it seems. They had several Belgium offerings including Chimay, Duvel and Satan, plus a few from Unibroue too I recall.

Service was quick and very attentive, the chap behind the bar didnt seem to talk much but he was courteous and always let the beer settle and then topped it up thus ensuring a full pint, a nice touch that and one that shows that this is a Beer Bar that looks after its custom. In addition to this, we got a free bowl of Pretzels, something often seen in Belgium, but I cannot recall the last time I got free snacks in the US.

The Clocktower Cellar Pub makes a great one-two with the Mammoth Brewing/Whisky Creek set up just over the road. Out of the two I easily preferred this place, it had a great range of bottled and draft beers backed up with service that knew the beers and was customer focused. A great bar, I hit this place on the eve of the Mammoth Festival of Beers and Bluesapalooza with my fellow LongBeachHopHeads, but I can imagine that this place kicks during the Ski season on the cold dark nights. Recommended.