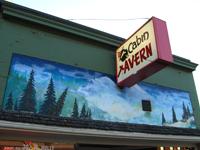 Shoreline, WA can be a harsh and unforgiving place for the discerning beer drinker. Constructed around the notion that essentially any strip mall is a good strip mall, and all casinos are swell, the options for variety are very slim. Dining options within Shoreline are generally limited to some decent Thai, Chinese, and the world's busiest and most inconveniently designed Jack in the Box. Your opportunites for good beer are few and far between in this city that isn't quite a city, and the opportunities to have good beer and great food at good prices are almost nonexistent. Except for the Cabin Tavern.

Atmosphere: The Cabin is still in the same building it first occupied in 1927, just a wee bit worse for the wear after the 2001 earthquake (the front third of the building is now about 6-8 inches lower than the rest of the building, and the bar now looks like a skate ramp). Big screen TV, plenty of tables and chairs, a patio off to your left and a gas fireplace in the back behind the pool table.

Quality: I am always a bit confused about this category. Quality of the food is fantastic. They smoke their own meats (even their meatloaf, which I find a bit odd), and everything out of their tiny ass kitchen is made from scratch. I've never had a bad meal there. Quality of the beer is also good, as they work hard to keep the lines clean and ensure that there are no off flavor pints ever poured. Quality of the establishment? Well, it's in a building that was built in 1927 and got nailed during our last earthquake. It's comfortable as hell, but it's not shiny and new. I think 'quality' in this regard is really in the eyes of the beholder.

Service: Amy, you're a doll. I've come to the conclusion that all good bartenders should be named Amy, as every single one I've had named Amy kicks ass. Quick with the pints, she (freakishly enough) remembers who I am, and goes out of her way to get everyone served.

Selection: The Cabin only has about 12 taps, but only two of those are given over to macros. The others carry Maritime (one of the few places to find Jolly Roger on tap in the winter), Deschutes, Mac & Jack's, Redhook, and some others that escape my mind at the moment. Paul seems to be semi-adventurous in what he'll put on tap, but has yet to throw on a saison or an imperial stout (to my knowledge).

Food: Again, there is nary a misstep on the menue. It's all tavern food, but it's all delicious tavern food, and incredibly reasonably priced.

The Cabin Tavern is not the biggest or best beer bar in Seattle, but it most definitely is the best in Shoreline. Should you be trapped in that odd little city that really isn't, get your ass down to the Cabin for a pint and some damn good food. You'll be glad you did.

Cabin Tavern in Shoreline, WA
Place rating: 3.75 out of 5 with 1 ratings