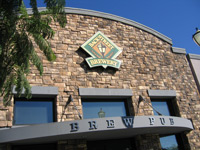 Stop #2 for the BA Pimpmobile Bus after the Stone 10th Anniversary Session A party.

As close as it was to the new Stone Brewery it took some time to get here, so the fact that we had a dancing pole at the back of the bus gave us something to occupy our minds.

The bus was able to pull up right outside of this location, which was a neat touch.

The interior, despite the bright sunshine outside, was darkened and certainly cooled off some hot BAs. Lots of exposed brick work on the walls along with a rather killer looking Brewery, split on two levels partly on the ground and also set high up in the lofts. The bar is easily accessible, with the toilets forming a central block within the layout.

Back Street Brewing in Vista hooks up on a synergistic basis with Lamppost Pizza next door, so the food tends to be heavily biased to the usual Pizza offerings from next door.

Beer range was listed high on a chalkboard at the back of the bar, an interesting range that included a few specials in and amongst the usual suspects. They had a Hefe, Blonde, Stout, Red, Pale, IPA and even a Rye beer if memory serves me right, though I have to admit to not paying much attention to the range of beers on offer, the buzz of the BA Bus Visit was overwhelming and the social part of the visit was much more important.

As such, it was great to experience good service here, and given the influx of some merry BAs all looking to get served at the same time, was handled in a surprisingly efficient manner. The server was attentive and focused, the brevity of his style was due to the fact that he was working alone, but he had served all of us within a short period of time and correctly with no incidents.

In fact, the only incident was of a spilt Pint here thanks to UncleJimbos terse and violent extraction of Ericas Stone Anniversary wristband.a focal point of the visit but the mess was soon cleaned up.

A quick stop here, but nonetheless the Back Steet Brewing set up at Vista is very nice, the interior layout is comfortable and the overall experience was very positive, even with our Pint spilling escapades the Server was a cool chap that kept everyone with a pint in hand and allowed some leeway to enjoy ourselves, often in a rather noisy manner.

I fully intend to get back here during my next trip to the Beer-muda Triangle (Escondido-Carlsbad-San Diego) and offer up a more detailed BeerFly, but despite the short visit here, I highly recommend the place.

Lots of interesting beers and lots of ticks. A great DIPA and great barleywine make drinking the other not so memorable beers alright.

More of a sports bar in down town Vista. Outside there are fire pits that you can sit around. Inside there are trivia games and TVs. Service was kind of non existent, which isn't bad if you order your beers at the bar and go sit down but if you're looking for a pleasant dining experience this probably isnt the place for you.

The onion rings and the wings were pretty good and reasonably priced. Would go back to try the new beers which seem to rotate regularly.

Another public transit accessible brewpub! Here, the Sprinter dropped me off at the Vista Transit Center, just a short distnace away.

The northwest corner of the building, just past the multiplex theater, had an outdoor patio attached and just past that was the entry which opened onto the expansive bar area with the inverted-"J"-shaped bar to the left. To the right of the bar were a line of high tables and chairs. Past the end of the bar was a stand-alone, three-place island, plus a series of standard tables and chairs. At the aft end of the bar, off to the left, were the four Serving Vessels. On the second floor, above the bar area's dining room, were the copper-jacketed brewhouse and five Fermentation Vessels.

Through a brick portal on the bar side was the restaurant side. It was ringed with booth seating surrounding a sea of standard restaurant tables and chairs with a game room in the the southeast corner and Lamp Post Pizza in the northeast corner. If only I had the capacity to eat pizza three or four times a day ...

Beers: They had some one-offs and were out of their standards on the day of my visit. Fair dinkum - call it seven: Hepkat Pale Ale; Jagged Little Pils; Crossroads Cream Ale; Double Trouble; Ramble DIPA; Slow Ride Berlinerwiesse and Stock Exchange American Lager. Frankly, most were passable and nothing was worth seeking out (unless you are a mission). Except for the Pils - that was as good as any I had tasted lately.

I'm here every first Tuesday of the month to meet with friends. Amber is one cool waitress! :D

The brew rotates semi-frequently, and the usually have a good selection of interesting and different stuff. Not your usual things you would expect (although they have those too).

It's mostly attached to a typical pizza joint (lamppost pizza) and there is a lot of family. But if you go in the back where the bar (back street brewery) you can see their beer selection on a board (or they have a menu). They do tasters as well. You can buy a numbered mug that they keep at the bar for you, and it's YOUR number.

I'm not a big fan of their food EXCEPT their linebacker pizza (all meat). I've tried getting alternatives (salads, sandwiches), they're just not that great.

My advise is stick to interesting beer and meat pizza. I hope they stick around and keep brewing and having new stuff on tap.

I didn't visit this Brewpub on a visit to North County several months ago-so my partner and I decided to give it a try. Well, I am gald that we took the time to do so.

There are two entrances-one located near the carry out side and one facing a theater. The interior reminds me of a low key sports bar. As others have written-I did not expect much. However, after my first sip of their Mai Bock-I knew that I found another must visit BP when we are seeing the in-laws. The Mai Bock and Dopple Bock were excellent-while my partner enjoyed her Porter. Had we not just visited Stone we may have been able to have a few more pints.

We did eat some apps-such as the sampler and the Pizza Strips-both were well done.

Our service was really good even though we were being served by the bar keep.

I like this brewery so much that I didn't even make it to Pizza Port on this trip (not that I like it better than Pizza Port).

See you there in January

Went to this place after seeing it while eating lunch and thinking, "funny, Lamppost Pizza's website doesn't even mention this being a microbrewery anymore".

Anyway, I ordered their Double IPA and my wife had Oatmeal Stout. I was very surpirsed that both were excellent. They were served in a shape of glass I'm not familiar with so I don't know how much beer was in them, but I got the feeling that although they called them pints they were smaller than the normal pint glasses which are only 14 oz anyway. Hope I'm wrong, because the beer wasn't cheap by San Diego standards even if they were giving me as much as usual.

Enough of that. Let me just say that the atmosphere was refreshing despite the classic rock playing in the background. Since this place is separate from the restaurant, you don't have the screaming kids running around like at Pizza Port, and you can hear yourself think over the music.

Overall, I hope this place hangs around. The beer was good, in a relaxing atmosphere. It's strange location in a Vista strip mall though makes me think that serious beer lovers won't support it enough to keep it on the right track. If Coors outsells their own beers long enough, I'm sure they'll stop brewing.

Great prices for lots "o" food. Great Pizza along with great brews. Cool competition the had with Belgians made from different local brewers. You can sit outside or inside....neato fire places next to movies if you want to see a show to wear off the buzz. Wife loves the salads. Full bar if you like hard stuff. Perfect little shopping center with everything. service can be rough because if a movie lets out they get slammed, not their fault though. Very reasonable prices on beer and food!