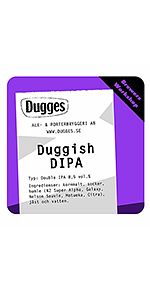 Served in a slaapmutske tulip.

The beer is orange with a slight haze not translucent but bright.. the head is white with big and little bubbles the head is sticky and laces the side.

The nose is complies but subdued. It doesnt punch you in the face but the hops are the show. A pleasent mix of orange, and tropic fruits and a slight earthyness. Nice

The taste is more malty then the nose, however that doesnt mean there sent a healthy dose of hops. A great example of a dips but ofcourse with a twist. This beer travels the world, and east cost dips, for those in the USA, meaning you can taste malt. The malt starts the beer while it is quickly taken over by hops. The journey continues to the southern hemispheres NZ hops, dank and earth with a mix of spicyness. Funny how different the taste and nose are.

Overall I love this beer mot crazy but a beer I would use to showcase how diverse beer can be. Well done

If you're a Scandinavian microbrewery making American hoppy ales- yea, we're salivating at the mouth waiting in baited breath and dying to sink our taste buds into these mysterious and citrusy ales! But once that fantasy becomes real, does the ale measure up?

Built upon a copper-gold body, the beer settles with a lather of white foam on top. Creamy, ivory, and light in its visual texture, the ale laces reasonably well with well defined rings at each sip.

Citrus and butterscotch race to the nose in equal fashion. Orange zest and grapefruit aromas are common the the IPA nose, but the butter and caramel counterparts add richness but detract from the sharpness of the classic Northwest "citrusy" hops. Earthen with mild chive, pine, herb, and leaf, the aromas leave the senses subdued and somewhat lackluster.

To taste, the flavors of hops and malt come very close to balanced. But these beers aren't supposed to be balanced- they're supposed to be hop dominant and lead with zesty grapefruit, orange, pine and earthy taste. Instead, the ale is well melded into the caramel malts and blanketed by a carpet of butterscotch and movie popcorn. Although these flavors are favorable in movie viewing, they are problematic in beer form. Its finish is full and dull and struggles to deliver the crispness that even big IPA's deserve.

But its the body that suffers the most. As the beer opens with creamy sweetness, the texture quickly trends oily and leaving a film of butter across the palate that prevents the flavor of beer from reaching the taste buds and leaving a film on the mouth seemingly of vegetable oil. Its finish is far from clean or crisp and doesn't allow for much refreshment. Still the beer is warm and lingers with fruit and caramel.

There are some strong diacetyl problems with the beer. It really deserves better fermentation on stronger yeast and a more patient maturation process. But in the end- the ale shows promise, but in its current state the butter is too much to overcome.