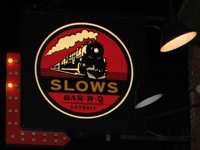 View: Place Reviews
Reviews: 44 | Ratings: 95 | Log in to view all ratings and sort
Reviews by DrJay:

I saw this listing on BA and figured it would make for a good stop during a recent trip to Detroit. I'm very glad this listing was here, because otherwise I would never have found this gem.

We stopped in for lunch on a cold day and sat at a table near the front door. It was sort of chilly, but fortunately they had some big, hearty beers on tap for us to enjoy. Our server seemed pretty knowledgeable about the beers and made some good suggestions for side dishes (definitely get the mac 'n' cheese). The bar was centered in the dining area and there were several booths along one wall.

Current draft beers were listed on a chalkboard. There were offerings from Shorts, several from Dragonmead, Arcadia, North Coast, Founders Breakfast Stout and Great Lakes Eddie Fitz (+ a couple more I can't remember off the top of my head). Definitely leaning towards local craft beers. Plenty more locals, regional craft and imports available in bottles, so there's no lack of good drinking options.

As good as the beer was, it's the food that really shines at Slow's. This was some of the best soul food I've had outside of Harlem. At our table, we tried the fried catfish appetizer (delicious) and wings (full wings slow cooked rather than the chopped up things you get everywhere else) to start. Entrees were impressive. The half rack of ribs filled the plate and the triple threat sandwich was packed with nothing but pulled pork, ham, and bacon. I had the beef brisket, which consisted of a pound of thin sliced meat all by itself on a plate. Sides were served on side plates and were nearly a meal on their own. There were five homemade BBQ sauces available at the table, so you could choose what you wanted or mix and match. The apple BBQ sauce was the fav at our table.

Overall, we left stuffed and full of good beer. It was quite reasonably priced too, just check the website to see current prices for food and beer. I know I'll be back the next time I visit Detroit. Highly recommended.

Finally made it to this Michigan BBQ icon....and it was not disappointing....

Nowhere good as I was expecting based on the hype. Telling me to look up the draft list online is never a good start. The food good but not above average but there were large portions. Definitely not a place I would ever go to again.

Pretty busy for a Tuesday night in what seems to be a small dining district in Corktown. At least ten maybe twelve taps - some local some not, a good cross section of styles. Bottle list was extensive but stuck with taps.

Food was good but don't know how authentic. Only menu shortcoming was no collards.

Friendly staff that was more than happy to talk about food and beer.

Look, they carry lots of local brews, which is great. also, great not so local ones. But the best part is getting some of that BBQ to go with it. Many of us have driven down from the burbs on lunch hour just to pick up some Slows and boogie back to work. Many have gone out of their way just for Slows BBQ.

Arguably Detroit's best BBQ spot. Great food, and one of the best tap lists in metro Detroit. 50+ taps, usually some rarities on as well. Occasional cask and cellar-pull offerings. Tap-takeovers an patio parties from time to time as well. Great spot to grab a beer and some good cue.

Great food great beer, just too many waiters pushing the flavor of the month beer from Atwater when there are so many great options on the boars. Yardbird sandwhich and a beer is a great end to the work week :)

Visited at 5pm on a wednesday, after seeing how busy this place is.

Ordered a half-rack of baby back ribs with sides of potato salad and wedge fries. Amazing. the sauces they had at every table were delicious. Enjoyed a Rogue 7-hop with my ribs, it was so freakin' fresh.

Perhaps the only con about this place was the server. She wasn't knowledgeable about beer... My friend asked for a hoppy IPA, which they were sold out of, so she suggested Stone's Crime 2013 beer instead! Little did we know that it came in a 500ml bottle (17.99!) and it wasn't a hoppy substitute - its stupidly spicy!

Apart from that, I would definitely return here. Place has a very classic Motown feel.