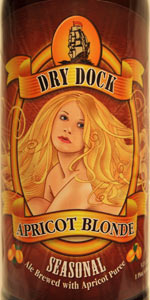 Notes: A misty golden blonde ale fermented with shiploads of fruit. A crisp, clean finish and just enough apricot to make this a favorite. Best with sunshine and friends.

Labeled "Apricot Blonde." Poured into a snifter; color is cloudy light orange. About an inch of dense, bubbly head, which quickly receded to a nice ring of lacing.

The smell of this beer is phenomenal. Just a big punch of rich apricot goodness.

Loads of apricots with a nice, subdued malt backing and a touch of bitterness on the end.

This is by far the best non-sour apricot beer I have ever had, just delicious.

Served straight from the refrigerator and allowed to warm over the course of consumption. Side-poured with standard vigor as no carbonation issues are anticipated.

A: Pours a one finger beige colour head of fair cream, nice thickness, and pretty good retention. Colour is a nontransparent murky hazy copper. No yeast particles are visible. No bubble show.

Sm: Fresh apricot with clean malts, cream, and some light fruit hopping. Quite a pungent aroma.

T: Apricot puree and cream over a clean malt foundation. Light fruity hops lend some character and help round it out. A moderate strength taste; it doesn't hit me as bold or experimental. Some clove-ridden yeasty notes. Somewhat simple. Fresh and enjoyable. Not horribly complex or subtle, but likable.

Mf: Smooth, wet, and refreshing. Clean. Adequate carbonation. Adequately thick on the palate. Suits the flavours in a general sense.

Dr: Drinkable and enjoyable. I'd try it on draught. I like it. Will satisfy apricot beer fans.

For this from a friend in Colorado in an awesome beer trade that included a ton of Funkwerks. Certainly looking forward to that but my first foray is this one.

As soon as I open the can I get that sweet apricot aroma. So fruity. It's not bad, but I normally don't love fruit beers so let's see. Head begins a little thin, but when it dies away it leaves me a nice, satisfying layer of lace. Golden orange and cloudy.

Like I said major fruit aroma. A proper whiff reveals that this is no ordinary fruited beer. Barely getting any beer at all, but if I didn't have my eyes open I would swear there was a ripe, delicious apricot just inches from my nose. No artificial flavors, here. I could smell this all day, but I'm eager to taste how this apricot bomb mixes with the (presumed) hops.

Apricots and citrus as expected. If I'm totally honest, though, I'm a little disappointed. Don't know what was expecting, but while the apricot flavor is the main attraction I think I was hoping it would blend with a stronger bitterness.

The mouthfeel is a bit underwhelming, too. It is a blonde, though, so perhaps I was expecting more of a pale ale body.

Too much comparing to Dogfish's Aprihop, which I like, a lot, and this beer doesn't quite make it there. It's decent I suppose if your a fan of fruit beers, but this one is not for me. It does, however get major points for authenticity. They did not cut corners on the apricots.

Pours a light orange with a yellowish hue and a white head. Aroma is apricot jam straight up; its good but definitely one dimensional. Flavor is pretty much the same, with dominant apricot. At first I get some fresh apricot fruit, but then the sweet jamminess comes into play. Along for the ride that shows itself in the finish is some slight cracker. An active mouthfeel, works well. Overall, a solid and enjoyable fruit beer. Will drink again I am sure as it makes for a nice summertime brew, but definitely best as part of a mixed sixer.

Can to glass, quick pour nets only a half finger of clumpy white foam atop a hazy amber body. Poor retention and nearly no lacing but it's a fruit beer so that's expected.

Apricot fruit is dominant on the nose but not overly sweet. There's a hefty dose of butter bread in there too with some fruit pungency and a stale tartness to finish.

Juicy apricot with wheat toast, pretty simple profile. Walks the tight rope between sweet and balanced with confidence. Ends with a flash of tartness and some ripened fruit pungency.

One of the better fruit beers I've come across, since it's delivered in a can it makes for a nice and easy summer go to. Pity that it doesn't make it out to my state, drink up Colorado.

Apricot Blonde from Dry Dock Brewing Co.
Beer rating: 87 out of 100 with 259 ratings