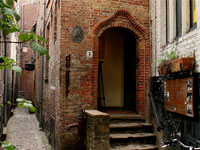 Rated by mattreabs from Wyoming

Rated by ptarmigan98 from Alaska

4.54/5  rDev +2.3%
vibe: 4.75 | quality: 4.75 | service: 3.75 | selection: 5
Excellent bar, stopped by on a mid-week night and the place was very busy. Managed to get a seat by the window upstairs which was nice. Excellent menu with it spanning several pages. Had the house tripel which was excellent, as were the two bottle I followed it with. Lively feel to the place and somewhere I'd go back to if I'm back in Bruges - probably the best bar I stopped by at in Belgium and there were quite a few good ones.
Jul 03, 2018

Reviewed by The_Bujon from Ireland

4.34/5  rDev -2.3%
vibe: 4 | quality: 4.5 | service: 4.75 | selection: 4 | food: 4
Another must go to place if you can find it. Head north of belfry and to the right corner of the square, 50yards and your looking for a tiny back alley entrance to your right (next to a traditional toy and mannequin store).
Once in, you'll feel like you have found a secret den, you can only sit and will be told to come back if already full.
Beer selection is a little limited and you are generally encouraged to take the house beer!! Personally try something else, but that's just my two pennies worth.

The place does feel like Rennie Artois' cafe in Allo Allo, and the table service from the head honcho is first rate.

Tiny place, maybe 300 square feet per floor (there are three.). The size makes is very intimate and the vibe was friendly wth a good mix of patrons and languages.

Selection isn't at huge as some other places, but well curated, and the real draw is the house tripel, a monster of a beer at 11 % with a truly iconic glass, which they also sell. Everything is poured expertly, into correct glassware, of course.

Food is limited to some charcuterie and cheese, but it's very good. The paté was wonderful.

Overall, one of my favorite spots in Bruges, and a must visit for any beer fan!

Reviewed by kffoster40 from Massachusetts

4.94/5  rDev +11.3%
vibe: 5 | quality: 5 | service: 4.75 | selection: 5 | food: 5
Loved this spot. A really cool location with a great vibe... Total mix of people from families to couples to locals to tourists but it all seemed to mix for an upbeat lively time. The beer selection is great but I would recommend getting the De Garre house beer. The service was a little slow but everyone could not have been nicer.
Jun 12, 2016
Rated: 4.15 by Euroglot from Belgium

4.18/5  rDev -5.9%
vibe: 4.25 | quality: 4.25 | service: 4 | selection: 4.25
Visited De Garre on 11/8/2015. It really is somewhat hard to find if you don't know what you're looking for - we walked by the "alley" twice tying to find it. Regardless, the place is well worth you time if visiting Brugge (my second favorite place). De Garre is intimate and rustic - lots of wood and stone. There are three floors to the establishment and what is cool is that you can look down from the second floor to the ground floor which offers a cool perspective. That said, each floor is fairly small and can maybe accommodate about 20 or so patrons. We came for the tripel, which was quite good, but the beer menu as a whole is fairly extensive. No "wales" per se; however, the bottle list was quite extensive (probably about 150 bottle offerings) and was organized by style. I found the prices to be quite reasonable when compared with offerings in the States. It appeared there were some light snacks on the menu; however, I didn't pay particularly close attention to that or the draft list. Well worth seeking out if you are in town.
Nov 19, 2015
Rated: 4.43 by NO13BABY from Maine

Reviewed by Jesstyr from District of Columbia

Everything about this place is the perfect pub, mixed with a bit of romance. Cool little bars in a historic building. The house beer is a really solid tripel too, a worth a try.

This isn't the place to get the best selection in Belgium, but what they do have is served properly, in the right glassware. The only gripe might be that the service isn't extremely knowledgeable in the context of some of the other top spots, but that doesn't mean they wouldn't blow away your average pub.

Reviewed by treznor from North Carolina

1.73/5  rDev -61%
vibe: 2 | quality: 2 | service: 1 | selection: 2
Had what was quite possibly the rudest waiter I've encountered. When leaving he told me he was upset that I didn't say hello to him. So I guess make sure to say hello to everyone you see? (Even though my wife did say hello on the way in).

The triple is quite tasty. I'd had it before at Thirsty Monk, and still as good as I remembered it. However, not a huge amount of interesting beer after that. They have a decently wide selection, but its the same selection you can findalmost anywhere else. Really didn't see a lot of local beers or anything outside of what you can already get in the US. Most other places we went to had a number of interesting beers that don't leave Belgium (or at least don't make it to the US in mass quantity).

Reviewed by GJ40 from North Carolina

4.61/5  rDev +3.8%
vibe: 4.75 | quality: 4.75 | service: 4.5 | selection: 4.5
We came to Brugge last year and did all the hard work to find it but De Garre was closed for construction. Fortunately it was open this time. What a place! I almost didn't go in because from my view at the door, it felt like I was interrupting a formal dinner party. But my wife urged me on and I was glad she did. Downstairs was full but upstairs was empty. It's so authentic and comfortable. We enjoyed the house tripel which was outstanding. No need to go through the menu for your first beer. This is truly a must visit in Brugge!
Feb 06, 2015
Rated: 4.71 by Highbury09 from North Carolina

Rated by simoen from Belgium

Small and cozy, we squeezed our way up the tight steep stairs to the 2nd floor and settled in for a glass of the delicious house Tripel that came with a small plate of cheese. (How I wish I could have bought an empty glass to take home too)

I have to plead a bit of ignorance, because I came for the house beer only, and didn't even bother looking at the menu. But, I know the selection is solid.

Service was friendly and quick, even though they were fairly busy. In fact, I swear the girl that was pulling great drafts from the taps was maybe 18 years old, and she already had the skill mastered.

Wonderful atmosphere and top notch beers, definitely made the effort to come here well worth it.

Reviewed by aleigator from Germany

4.5/5  rDev +1.4%
Nice place, very well hidden in the center of Brugge. Usually they put up a sign, which makes it easier to find, because the only way to the bar is through a tiny alley. Many locals there, who seemed to feel pretty much at home there, which is always a goog signal for me to drink there, because it doesn’t seem to be a tourist rip-off.
Of course we ordered a "Triple der Garre", which they offer exclusively only in that particular place. The beer was really pleasant, and gets served with some young cheese, which goes well with the beer.
The atmosphere in the place was enjoyable, people were chatting and drinking, got pretty loud later in the evening. Staminee de Garre has a country-sytle look, which somehow gets represented by its visitors. There is a maximum of three "Triple de Garre" you are allowed to drink, but this should not be a real concern, because after those three you should be able to fall asleep easily.