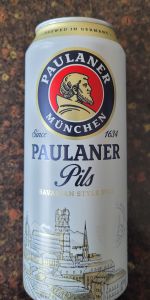 Delightful as would be expected of a Paulaner.

S= very intriguing-- I'm nor sure if it's more reminiscent of a tropical fruit-buffet or of a honeybun cooking in the oven. You can hyper-ventliate, trying to figure it out. Maybe it's some bubblegum.Yeasty sweet-malt and hops.

D= very; nothing to put you off, here.

On-tap at the Paulaner Bräuhaus, in the Munich Airport.

Bubbles, froth and a shinning shade of gold make for a gorgeous looking pilsner and Paulaner Pils has all the right things in all the right places. Its clarity is immaculate with an easily visible carbonation. Its head is fleshy though not fat and despite some porousness it leaves imprints of lacing that resemble the inlay of a computer microchip.

It can be awfully hard to find well-hopped, aromatic pilsners in the pasteurized bottles and cans that make it over the Atlantic; actually being in Germany, you're more likely to come across the expressly hoppy, traditional style of pilsner but that's not a guarantee. This beer is a benchmark example of the style but it leaves much to be desired bouquet-wise.

I'm finding more of what I was looking for in the taste: soapy, grassy Noble hops. That being said, I'm not finding a ton of them and what little of the pungent, sassy cones are being tasted is mostly afforded only by virtue of such a light, clean, relatively tasteless malt bill. Mild-tasting a beer though it may be, it's not its flavour that makes it so fantastic...

It's the unparalleled level of casual, carefree quaffability! They should hand this thing out to marathon runners at the end of a race; there are few beers so incredibly gratifying and refreshing (especially if thirsty or in hot weather). It is a simple and plain beer, to be sure, but it achieves a level of drinkability that can only be described as 'stupid'.

When it comes to clean, refreshing lagers the Germans wrote and still own the handbook. What defines their brewing scene is not the scorning of convention, but the perfection of it. While many North American drinkers approach a beer like this with a type of stoic resignation, I can assure you that to have it in its native land is something memorable.

A: The beer is a dark gold color, with a medium off-white head that fades slowly and leaves a thin lace on the glass.

T: The taste starts out sweet with flavors of honey and caramel. Then some breadiness comes in from lager yeast and a hearty but not too heavy malt character. The hops presence is very mild but brings some balance. The after-taste is slightly bready and slightly sweet.

O: A little tasty, goes down easily, not too filling, mild kick, good representation of style, it’s a decent beer but there are better choices within the style.

Poured from a brown bottle.

A: Poured with an inch of frothy head. Very light yellow in color.

T: Begins sweet. Turns a bit sour and ends with a mace-like bitterness.

M: Smooth. Not dominated by carbonation.

Overall: Really wish the taste lived up to the smell. Love the aroma, but not too enamored by the flavor.

Barely sweet, bready malt kicks off the flavor. Gets a little tangier in the middle before drying out a bit, and a decent bitterness finishes things off. Nicely balanced, clean, and refreshing. The mouthfeel is light, the carbonation nice and forceful to create the sensation of more body than there is.

Overall a very decent Pilsener. I am partial, a bit, to some of the American versions with a little extra hoppiness, but this is only just a notch below some of my favorites. I sadly overlooked this beer for quite some time...

This beer was poured into a Pilsener glass from the 12oz brown bottle.

Fluffy white head with nice retention and lacing on top of a golden straw body. Aromas of spicy hops and gently malts along with a hint of apples. Flavor is quite mild. Spicy hops are enjoyable as is the bitterness. Malts provide enough to hold the beer together. Mouthfeel is crisp and light. Overall quite enjoyable, but just not enough flavor to keep drinking. Nothing offensive about this one though.

On tap at The Old Toad in Rochester, NY.

This one pours a clear light straw yellow color, with a small foamy head, and lots of lacing.

This is definitely a classic German pils, with a clean and firm grassy bitterness, a bit of lemony and pear-like hop flavors, crisp biscuity malt, and a bit of herbal flavors, too. It's clean and simple- just the way I want it.

This is light bodied, with a super clean feel to it, It's supremely drinkable.

This nails everything I want with this sort of style- it's crisp, clean, and drinkable, and interesting.

dreadnatty08 from District of Columbia

"produced on" 03/06, I hope this holds out.
Pours a medium golden straw color with a less intense head than expected, just a covering of big bubbles and good lace on the side. A very clean aroma overall, some light graham like aromas, sweet biscuity malts, just a touch of hops, but I imagine age has hurt this department. It starts sweet on the palate, with the light malts coating the mouth, incredibly clean with a very crisp finish. I also taste some faint spicy hops towards the end, probably Hallertaus. An enjoyable pils, but one I would like to try fresher.

Ha ha. Watch out for this stuff. I was in a nice bar in Vail and there weren't too many choices for tap beer. I started with (and stuck with) this because it was a perfect presentation in a tall glass. The aroma was so good. I didn't think it would kick my butt.

I ended up staggering around a bit. I am glad I didn't have yet another (they are so drinkable, you forget that it will do you in). Then again, I did get a free shot of Patron from the barkeep (it pays to tip nicely). Maybe it was the Patron, or maybe not, but the Paulaner smelled very good and went down easy.