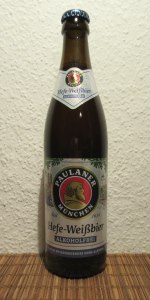 Pours a hazy golden color with a large head and lots of carbonation. The head dissipates quickly but there is a lot of lacing left behind.

The smell is full of bananas, coriander, bubble gum and lots of wheat sweetness. There is some citrus in there, maybe tangerine.

The taste follows the nose with lots of banana, wheat, light bready malts and citrus. There is some light hopping on the back end and the finish is both creamy and slightly dry.
Overall, though this is not the best Hefe-Weisen, it is very good for a low-alcohol type beer.

From Hipercor. In Paulaner glass. At lunch, with chicken steaks and 3 delices rice. A step below my favourits non-alcoholic but not bad. A bit metallic, specially at the end of the glass

Hazy golden orange color with a thick off-white head with eternal retention and leaving laces.
Aroma is somewhat similar to its Erdinger peer, but the devil is in the details, it feels more natural, with honey and grainy malt sweetness notes, a bit of toasted. But also it does not feel like a Hefe.
Flavor with notes of grainy malt, hints of grassy hops, honey, oranges, cooked vegies and maybe some very faint cloves and banana combo. Dry aftertaste with a low bitterness
Light to watery body with mild carbonation.
This doesn’t really resemble a Hefeweizen, but it is not unpleasant and it does not bother as Erdinger’s Alkoholfrei. It feels more like a beer (increasingly as you drink it) and better balanced given some perceiving hops. Still body is very thin and again it is a bit like dry malt extract diluted in water.

Alcohol free light Weizen. It's almost non carbonic what makes give it a taste of it's was opened three hours ago.
But have to say, that the taste of the beer itself is good but should be drank cold.
If you're looking for some sparkling and good tasting Weizen without alcohol you should try the Erdinger Weizen.

A: Cloudy, amber with a thick foamy, creamy looking head with great lacing.

S: Smells malts you’d find in a child’s beverage, much like other alcohol free beers I’ve tried, as well as citrus and coriander. Both seem equal in proportion, but the malt hits the nose first.

T: Tastes like malty Ovaltine or Milo-like (without the chocolate) beverage, watered down beer, some but little coriander and citrus coming through as well as a little banana, and some strange unpleasant sour/bitter flavour that I find in some other low alcohol beers.

O: Overall, refreshing but a disappointment for an alcohol free beer. The typical hefe-weise flavours are not standing out as much as I would have hoped. The Krombacher version of this takes the cake by far.

500ml bottle poured into a pils glass by freshness date.

Biscuity malt, some hint of yeast and cooked veggies in the nose.

The only thing reminding of Hefeweizen is a zesty citrus, no banana, no wheat, no clove, no bubblegum just citrus zest, cooked veggies and trait of malt. The body is light with smooth mouthfeel by moderate carbonation.

This is just another typical NA beer, light and clean and same time lackluster.

Catch up rating from notes, 2012: Bottle from Edeka. Overall not bad for a low alcohol beer, much better tan expected. Pours out a cloudy golden orange, with a thick fluffy head, just like a normal weizen. Aroma is more grainy than usual, minor notes of banana and bubblegum. Taste mirrors the aroma, very bready, with minor weizen notes. Body is s bit thinner than the normal style as well. Drinkable, but I'd take a regular weizen any of the week.

Orange color, semi opaque, the hefe has the normal effect, small bubbles, the carb is almoust null. some waste on the glass, the head is richy and creamy

smell is better than expected, the usual hefe weissbier aroma

the taste is good enough, is just like a normal paulaner, the wheat flaovur is noticed, the end is a little bit different

This is a very good low alcohol Weißbier! A few weeks ago i was visiting my beerbuddy Don (Digita7693) in his hometown Kassel in Germany. We went to an Indian restaurant in Kassel which was great. They served us this version...

Poured in the original glass the beer looks great. Cloudy lightbrown to darkyellow fluid and lots of head. Pour this one quitly in the glass to get best results.

Good taste, this is a great beer when you have to drive afterwards. Not watery in the mouth. The mouthfeel is high but i noted this for the good quality of taste.

This beer is NOT RETIRED. I went to the Carrefour in Varna, Bulgaria today and found a great many of these on the shelf, when I didn't seen them about a month ago. The date on the bottle is 2/2/2010 So I think these are back into rotation.

A: Poured from the 500mL brown glass bottle into a weizen glass. The beer is a nice cloudy orange, just like a normal weiss, with a good amount of carbonation within. Head was very surprising - 3 and a half fingers, pure white, and with very good retention - something I haven't really seen in a low ABV beer before. Nice.

S: Heavy on the bready/biscuity notes, with a slight hint of yeast, like a waft of biscuits n the oven. Outside of that there is a slight hint of citrus and almost none of the stereotypical banana or bubblegum notes. In this way, this doesn't quite smell like a weiss, but it's not a bad smelling beer.

T: Here's where the beer starts living up to the non-alcohol reputation. The beer has no backbone, and is very watery. There are some hints of bread or citrus, but almost invisible. This might as well be Bud Light, taste-wise. Almost nothing here. Finishes similar, a slight lick of some sort of light fruit, then just water all the way down.

Notes: For a moment there this seems like a "real beer," right up to the moment before it hits your tongue. Then everything fades back into reality. This might be a good beer substitute for someone on the wagon, but comes very short of being a good weiss. If I ever gave up alcohol, I don't think I'd go to NA beers, but get into something else instead. They just don't quite live up. That being said, I think this drink is probably near the top (if not at the top) of the NA list. Before drinking, it gives a good impression of being a real beer, which is really the point, isn't it?

It looks pretty good. Tall cream colored head fades a little faster then I'd like, but not bad. Murky golden beer is duller then normal (I'm not sure that means anything, but it has a strange color to it). Smells good. Faint banana with hints of bubble gum and wheat. Mouthfeel is subpar for a Hefe-Weizen, but not totally lacking like most NA's. It's moderately light and fluffy, but it there is a strange faint lactic twang. The taste is almost absent. You get more flavor from breathing in just before you sip then you do from the actually liquid. There is an acidic flavor/feeling that dominates the flavor. There might be a hint of wheat underneath and a dash of lemon, but the yeasty/banana flavor is missing. There are no off-flavors or aromas, which is nice. With a touch of flavor this beer could be at the top of the NA list.

I had this beer at a wedding, serving as Designated Driver. It was labeled "Thomas-Brau". Pours with a clear, golden color and a puffy, good-looking head. Aroma is of cooked vegtables and wet, uninspiring grain. Taste is hollow and empty, no real character at all. No mouthfeel whatsoeverslightly more appealing than soda water. ON the upside, it's better than O'Dools and other NA's. There is a beer flavor, and it's crisp and thirst-quenching. One of the best non-alcohol beers I've had.