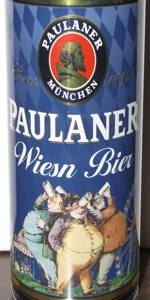 This full bodied golden Oktoberfest lager is the only beer served in Paulaner Oktoberfest tents today. It is the pinnacle of German brewing: wonderfully mellow with a balanced harmonious taste. It has a strong note of malt and the pleasant fragrance of hops.

Cool looking bottle artwork. I do notice a best before date on the side of the label. Mmmm I taste white bread, some grains, slight cracker, I agree with the honey note that was mentioned on this beer as well. This beer is well balanced & well made. This is easy drinking & delicious. This is a great lager, too bad I don't see this beer as much. I prefer this over the regular Paulaner Oktoberfest. Cheers! A-

500ml bottle. 07/15. Pours a bright, pale straw colour with a frothy, slightly off white head which refused to disappear and excellent lacing. Very gentle aroma of malt and only a hint of hops. Light sweetness and light bitterness. Very clean. Medium body, smooth texture and just a touch of bitterness in the finish. Not very complex but subtle, well made and a perilously drinkable brew at 6% abv. I wish I had another one of these, as it's not a beer to be pondered and dissected, it's a beer to be simply enjoyed.

Drank several .5 liter cans of this several years ago. Would like to purchase more. Problem is I live in Dallas. Very smooth going down. Nice European taste. One of my favorites.

Although my hometown of Waterloo plays host to one of the world's largest Oktoberfest celebrations (which actually just ended yesterday), I'm sure the real thing in Munich would be something amazing to behold. Someday I hope to make the trip to Bayern, but to tide me over until then, the LCBO brought in a lovely Paulaner MaB and 1L can giftset to celebrate the Oktoberfest season. A lovely way to toast a splendid fall day.

The 1L pour was quite something, but it resulted in a brimming frothy head and scads of lacing. The brew itself is a brilliant golden, with visible carbonation until the bitter end (at a whole litre in volume, that 'bitter end' took about 45 minutes to reach). I've got to say, the glassware brings out the very best in this brew; what I'm sure would be underwhelming in a regular lager glass looks bloody brilliant in a shiny new MaB, so forgive my bias.

The nose is satisfactory, but less than exciting. Bready malts, honey sweetness, mild leafy hops, chestnuts. Not entirely unlike a German pils.

The taste is not that of a dark, robust marzen, but again rather like a German pils. Slightly sweet, bready, and with a crisp, hop finish. A touch of lemon to the finish as well. Although I'd very happily drink this over the standard Oktoberfest beer in KW (sadly, Molson Canadian), there's nothing overly interesting about this brew, save for the fact that it's called an "Oktoberfestbier" and comes with a giant MaB. Still, these things can't be overlooked - in a party atmosphere, a brew like this goes down outrageously well in vast quantities, which is a very good thing.

Mouthfeel is quite impressive; even near the finish of the giant can, still a steady carbonation. Lighter bodied, but still above average for the pils style.

A great Oktoberfest quaffer - nothing overly exciting, but damned exciting to drink in such a cool mug in a festive setting. Prosit to another Oktobefest, and looking forward to next year. Gemuetlichkeit!

Pale gold in color with amazing clarity and a thick, frothy, white head that refuses to go away. It has that classic lager look that is very easy on the eyes. Bready, doughy malts are abound in the aroma, but gone are the rich, toasty notes you would find in a traditional Märzen, as they are replaced with a generous dose of spicy, floral hops. The flavor implies sweetness initially from the malt, then gives way to moderate bitterness from the hops. Mouthfeel is medium bodied and dry while finding a beautiful balance between strength and drinkability.

This is the beer I drank in the Paulaner tent in Munich in 2007 that I have such fond memories of. To find a six-pack of it in America, fresh, mere miles from where I work, is truly a glorious thing. Prosit!

Did anyone else simply HAVE to buy this massive liter can with the Krug when you saw it at your local beer pusher? I mean, the presentation practically sells itself. I immediately justified buying 2 at ten bucks each -- you can always use more Krugs around the haus, ya know?

Tonight is a hotter-than-it-should-be late October down here in the Sticky South, so I pulled out two good mustards, grabbed some Whole Foods brats and some kraut, and put together a meal my health-conscious mother would be sure to disapprove of.

A. Dumped into the same glass it came with, the can gives up a clear straw-gold brew with a fast dying, no-lace-leaving foamy head. It expires in mere minutes - disappointing. Oh well.

S. Clean and simple bier here - fluffy malt sweets and watery - I really think you can smell the water here... light and inoffensive and in-everything. Smidge of soap. Barely hints at a Marzen.

T. Pretty light going, easy German malt and noble hops to freshen it. Extremely small malt character compared to the Marzens I'm used to - there just isn't much here. A little hop-pepper spice, I suppose. Some sweet pale malt, a tinge of biscuit that vanishes as soon as you try to catch it, and a whisper of earthy hop bitterness that thankfully lingers a little into the finish. It's very easy to drink... but it's also not very rewarding.

M / D. Pretty darn spot-on... very good crisp-low carbonation that avoids being sharp. The beer itself is watery and seems to be tailor made for chugging out of big thick mugs... oh, wait. The best I can say is this: I drank this quickly, but if I was quaffing this at a proper Oktoberfest shindig, I'd request something else after the first. If nothing else was forthcoming, I would not have a problem drinking another few Paulaner Wiesens. Make sense?

This is pretty much teetering on the barest edge of an enjoyable Ofest bier for me... there is nothing really wrong with it if you like this style on the lighter end, and I can absolutely see this being a good gateway beer. Other than that... well, enjoy your Krug! I know I will.

Poured out of a 1L can(canned 5.29.12) into a Paulaner maß. The beer appears a transparent gold with a big frothy white head.

Lots of grassy and earthy noble hop in the nose. Slight touch of grain and sweetness.

Great grassy and earthy hop flavor. Grainy. For how prevalent the hops are there is no bitterness present.

Very drinkable with a medium body, smooth, crisp, and drying.

L: It is clear light yellow.
S: light herbal hops blending to a wet grain smell
T: Malt note upfront wanes with a crisp edge from the hops and fades quickly leaving a slightly sweet malt taste lingering. Keep in mind the malt flavor is much weaker than the traditional marzen. Very smooth and balanced.
F: Silky smooth full mouth feel with soft carbonation.
O: Very easy drinking with deceptively high ABV. Finish while still cold when mine warmed it tasted almost skunky. I really enjoyed this beer for a lighter marzen but like their other Oktoberfest offering better.

Poured into a glass from a can.

A - Pours a clear straw, with good carbonation, forming a thin white head. Light lace on the glass.

S - Slightly sweet, cereal, and a hint of fruit aroma from the hops.

T - Very light flavor. A bit grainy and biscuity from the malts. Very low hop presence, only the slightest hint of fruitiness in the finish.

M - Not medium bodied, but heavier than thin. Very smooth and clean.

O - Awesome German lager! If I had the opportunity, I would drink several glasses of this and love every second! Having said that, this does not resemble a Marzen/Oktoberfest as the style suggests, as the color is wrong and this beer does not highlight the strong malt body and flavor that Oktoberfest is known for. Much more like a strong Helles. Whatever it is, I love it, but around $6-7 a can, my consumption will be limited. My rating of this beer is based more as a Helles rather than an Oktoberfest. Although the style characteristics are off, this is still a fantastic beer.

The Official Beer of Munich's Oktoberfest.

1-Liter can that came with an official 2010 Paulaner Oktoberfest 1L stein.

D= until you drop.

Pouring from a thick 1L can into a heavy 1L Maß isn't the easiest task - and it results in a head that's huge even proportionally to the big mug holding it. While some of the scuzzy white stuff fades, enough remains to leave the surface with a handsome dressing. Oktoberfest Wiesn's colour - a stock and appetizing golden - is slightly besmirched by a chilly, dense haze.

Oktoberfest isn't the kind of style that at first impression has you saying: 'wow!'. I remember when I first tried it (and, back when, Paulaner Oktoberfest was actually my first) I found it very average and, truth be told, a little underwhelming. Give it a smell and you'll see what I mean. There's not much excitement going on.

But that's not always the case. Over the years I've learned to appreciate, with the help of some phenomenal American renditions, the charms of this seasonal lager - charms that this offering lacks. The big problem with Paulaner Oktoberfest is that it really doesn't taste much like an Oktoberfest should. This is more like a stronger pilsner or helles bock.

Which, from what I understand, is both common and accepted in Germany. It's unfortunate, however, that anyone hoping to experience the toasty, crunchy, rich, sweet maltiness of the darker, more distinctive varieties seems to have been let on. At the risk of repeating myself, this makes a better Pils or Helles than it does Märzen.

But it's not all a wash! This clean, bready flavour is nothing to shake a stick at; its graininess is wholesome, undisturbed by any straying sweetness or unwanted esters and concludes with a heavy-handed hop bitterness that clamps down on the tongue like a steel trap. The beer has a weight to match that of its stein and is at once filling but endlessly drinkable. It may be plain but don't discount its flavour; this stays mighty tasty even as it warms.

Oktoberfest isn't about beer, per se. It's about *drinking* beer, and a lot of it for that matter. Therefore, the Oktoberfest style doesn't concern itself with connoisseurship or contemplative quaffing, subtle detail or creative innovation - it need just be well suited to festivities, food and merriment. And, while it goes without saying I'd be enjoying this more in Germany, I think the rest of this Maß will be put to good use.