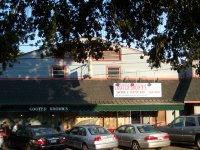 View: Place Reviews
Reviews: 27 | Ratings: 43 | Log in to view all ratings and sort
Reviews by jshusc:

For the beer nerds, the back bar is the way to go with 40+ rotating taps featuring a wide variety of styles. I believe the back bar doesn't open until 5pm during the week. The front bar also has a wide selection of beers although the focus is more mainstream beers. There is also a large bottle selection (over 100). There is a separate oyster bar (happy hour on Tuesday) and a separate food area. The food is pretty decent bar food although not quite gastropub level fare. They have updated their payment system so a tab opened at any bar works throughout the tavern. There's certainly some interesting decor, especially the celebrity carvings in the back bar. This is my go-to spot for NFL football since there are plenty of TVs, and they air all the games even when the Saints are playing. While I frequently go for the football, I'm happy to go even if there isn't a game on. They are located opposite side of town from Bourbon so there's much more of a neighborhood vibe at Cooters. The staff has always been friendly and helpful to me. Finally, for the whiskey drinkers out there, there is a killer happy hour on Mondays where any pour over $10 is half price. As you can see, there's a lot to like here, and that's why I keep coming back!

Cooter Browns is a fun place to visit in NOLA. A lively, eccentric sports bar with a unique feel. Tap and bottle/can selection is fairly varied although the back bar was not open on last visit. There is a lot to take in with their wall decorations, that's for sure. TVs everywhere as well, just to add to your disorientation. Great bar food on offer - with more than generous portions. Share a dish, trust me on that. Don't try going it alone!

Best Rotating Tap list in NOLA. Skip the front bar and head straight to the Back Bar with 46 rotating craft beers available. New food in the kitchen is a step above and not to be missed.

Make sure to head to the back bar, the "Snooty Cooter." The draft selection is vast and varied and a ton of bottles/cans as well. Great mix of local and imports. Best beer bar in New Orleans, make sure to stop by anytime you're in town.

Ken is the best craft beer bartender I've ever had

I used to work just around the corner in the river bend area. Cooter Brown's is a great place to have a beer(s) and some local food. It is at the opposite end of St. Charles, away from the tourists in the French Quarter. My favorite time to go there was mid-day on a week day. Quiet, relaxing place to have drink. Cooter Brown's has huge selection of beers in bottles and quite a few on tap. I am getting home sick just thinking about it.

Cooter Brown's has probably the best beer selection in NOLA (although I never did make it out to d.b.a. so I'm not quite sure).

It's in what I think is still called the "Black Pearl" neighborhood to the west of the city, past Audubon Park where the river bends at S Carrollton Street.

There are outside tables which seem to be the most popular, and not surprisingly so, as the inside is kind of dank and dirty (like most bars in NOLA). The tables also share residence with a Thai or Indian restaurant next door, although I didn't see anyone eating anything more interesting than Po' Boys and fried foods.

Moving inside, the food area is to the right, the bar is to the left, and there are communal tables in the center. There's another back bar to the back right, and there are some video poker machines back there as well (because nothing's better than drinking and gambling - and there's a pool table too, just-in-case-in you're a hustlin' pool shark. AIIIYEEE!). Some things I noted about the decor and the amenities: Tin ceiling above the main bar, tile floor, cute historic characters carved in wood hanging about, smoking, and smelly bathroom with a trough (mens, not women's - although I would never be surprised in NOLA ;)

The beer selection is impressive, although I was concerned about the freshness of the bottles. The coolers run a decent number of feet and they're pretty well packed. They've got beers I've never had, and they've got lots of classics - I can't even estimate a number - it's a lot. Draft taps number 34 to 36 out of the 40 because they've got some mixed drink things on a few.
The line-up as I saw it was:
7 from Abita (but of course!)
2 from Lazy Magnolia in Mississippi (LA's slower cousin)
2 from Covington (just above Lake Pontchartrain)
2 from Tin Roof
3 from NOLA Brewing
and
LA31
with the rest made up of fairly common domestics and imports.

After a leisurely ride on the St. Charles streetcar, hop off at Riverbend for beer heaven with great food. Cooter Brown's is usually crammed with happy customers, quaffing brews from around the world and munching on burgers and onion rings, fried to perfection.

If the weather is nice, you can sit outside. There are picnic tables all around. Inside, flat screens abound with sports aplenty.

Pick up a beer menu and peruse the many flavors, either on tap or bottle and can. I took mine home to study the flavors and styles I was unfamiliar with. CB is a place to educate your palette. You can ask for samples if you're curious. The bartenders are very helpful.

After we placed our food order with the cook and his helper, it didn't take too long for our number to be called. Killer onion rings!

Riverbend is one of my favorite areas in New Orleans. The Camellia Grill is about a block away from Cooter's. The feel is so laid back around here. Time, nature and ambiance collide to provide the perfect backdrop for beer karma.

Hop off the streetcar, hang a left and indulge.

A sense of humor pervades this gem. Since 1977, Cooter Brown's has been a popular watering hole, grill and oyster bar. Celebrity Hall Of Foam and Beersoleum - "Come have a beer with over 100 of your all-time favorite deceased celebrities". This is a beer bar (400+ different kinds of beer, 350 of which are imports and 42 of which are on draft), sports bar(17 flat screens and 2 eight foot drop downs) & oyster paradise. Raw oysters from the oyster Bar, boiled Crawfish (weekends), boiled shrimp and great tavern food including Po Boys, seafood, New Orleans sandwiches & specialties .

While in New Orleans for the 2011 Jazz fest, I took a ride on the Saint Charles St. trolley to visit Cooter Brown's. I had two goals: get out of the French Quarter for some decent beer, and get some of the best raw oysters in the area. I wasn't dissapointed with either.

With about 40 taps, Cooter Brown's offers a better than average, quality selection of local, American craft and foreign beers to include: practically everything from Abita, the NOLA Blond & Hopitoulis, Ponshartrain Pilsener, LA 31, Anchor Steam, Brooklyn Lager, Sierra Nevada Pale, Jefferson Stout, Guiness, Bass, Harp, Hoegaarden, Chimay, Paulaner Hefe and Spaten's Oktoberfest & Optimator, among others. Meanwhile the bottled beer list was an extensive offering of beers from around the world including everything you would expect and more than a few pleasant surprises. In addition, the ersters were huge and delicious.

If in New Orleans I would highly recommend getting out of the Quarter and heading uptown to CB's for some good beer & oysters at reasonable prices.