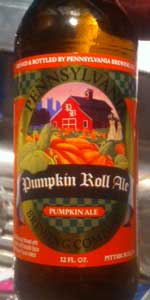 Poured this into a glass, it has a dark orange color body with a light tan foamy head that quickly disappers. The smell is sweet of vanillia and some spice. The taste has a strong canilla flavor just like the filling of a pumpkin roll. I get a lot of spice also of cinnamon and nutmeg,very faint on the pumpkin. Mouthfeel is awesome and overall one of my top pumpkin beers.

Poured out as a nice deep orange color with a white foam on top that held a pretty good retention, The lacing was pretty good also. The smell of the beer is loaded with sweet malts and spicy pumpkin notes. The taste was a bit on the sweet side, the spice balances the beer out a little bit but I think the use of a little more hops would do the beer some justice. The mouthfeel of the this was creamy, very smooth nicely carbonated. The use of non fermentable sugars in this gives the beer is a really good body while keep it drinkable as well. Overall this is a pretty solid Pumpkin Ale, Not bad for the first of the season for me, worth trying!

DATE: September 23, 2016... OCCASION... the first fall night that might warrant a pumpkin ale--time to try a new one... GLASSWARE: Schneider Wiesen Edel-Weisse pokal... pours a dark amber, thick body with a slow, easy, glass-wide effervescence... a half-finger, creamy thick head holds steady and leaves thick, filmy lacing behind... cinnamon outweighs the pumpkin, while allspice and nutmeg cloy amidst a soft pumpkin suggestion... spruce hedges its way in--odd for a pumpkin, but not unwelcome... a smooth yet lively mouth feel that lagers at the throat with vibrancy... faint play at the teeth... medium-bodied and drinkable at 6%... finishes with a soft but noticeable burn... surprisingly, the aroma matches its flavor profile, with nutmeg, cinnamon and allspice dominating... sadly, the pumpkin is tough to locate... this is a beer that suffers from its own label--is this a pumpkin ale? not really... this actually fits better with a holiday milieu, but not bad at this time either...

Slightly more than two fingers worth of crisp slightly off-white colored froth... Excellent retention, especially for the style... The color is a unique mix of copper and dark amber... There is a light ot moderate bit of carbonation which starts very sluggish towards the bottom of the glass and reaches warp speed before reaching the top... Solid aroma... Subtle autumnal spices... Caramel... Graham cracker crust... Fresh pumpkin pulp... The key features from the aroma are present but muddled... There is a slight charred character on the palate which seems to be out of place... Very pleasant... Medium bodied... Fairly dense... Brisk carbonation... A solid Pumpkin Ale, in a facets expect taste where where this one falls a bit short... Overall decent, but nothing spectacular...

3.25 A: Moderately hazed bright, but darker orange color. One finger of frothy white head. Retention is a few steps below average and a short ring of lacing is left.

3.5 S: Pumpkin, nuttiness, and caramel. Hints of vanilla. Mix of spicy cinnamon, nutmeg, and plenty of ginger. Pleasant, but perhaps a bit too subtle.

3.5 T: Like the nose, it's pretty decent, but needs more power. Spices per above with vanilla. Plenty of tasty pumpkin.

3.5 D: Not the best, but a better than average pumpkin beer.

LOOK: Pours an orange ish color, mostly clear, with a white head and some lace. Retention is good here, and there is plenty of visible carbonation rising up the sides of the showy pint glass.

SMELL: Initially a bit pungent with skunky noble hops, typically Penn uses the Sterling variety. Surprised at the hop burst, perhaps a bit fresh and more overstated than intended. This gives way to a smell that mimics the store bought pumpkin rolls that you find at a local grocer. Has some sweetness to it as well, and something about the smell is plasticky and artificial. The aroma gets sweeter and pumpkin roll like as it warms.

TASTE: Interesting. Pumpkin pie and vanilla upfront with a good punch of hops in the finish. Some vegetal pumpkin notes, toast, caramel, veggie, small heat, light cinnamon like spice and vanilla. There is a bitterness that is earthy, leafy, and more than sturdy. Has a good pumpkin flavor, maybe some lactose in there for more unfermentable sugar action. This beer is an anomaly of sorts, a hoppy, semi sweet pumpkin ale with vanilla, cinnamon and a bit of alcohol strength behind it. As it warms the Pumpkin Roll ale develops a better, richer sweet doughy taste that is kind of nice. This is an adventurous brew, that is for certain.

FEEL: Medium bodied feel, a bit slick on the palate, carbonation is at a good medium, and it has a soft smoothness. Lots of sugars coat the palate, but through the semi aggressive hopping there is a good balance.

OVERALL: Penn really took a leap of faith with this pumpkin ale, and I would say it paid off. A different take on a pumpkin ale, this one had a little bit of everything. The body was perhaps too light, and maybe underspiced as the hops came out clearly. I think this is a decent take on the style, and I'll have no problem drinking the 4 bottles I have.

Caramel color to the beer. Nice off-white head with a sparkly top. Wants to hold really well, too. A great looking pumpkin ale, and my first of the season.

Smells like a cream soda float plus pumpkin spice. Mostly a candied vanilla aroma to remind you of the cream filling of a pumpkin roll. I guess it does smell like a pumpkin roll. Very little in the line of pumpkin meat, but the spices conjure it all up. Allspice, cinnamon, pumpkin; these are the notes that follow vanilla. Smells like a freshly baked dessert, so I'm in. Here we go.

Bitter pumpkin roll spicing with bright, almost astringent, cinnamon, cream cheese, vanilla flavoring, allspice, a hint of nutmeg, and a not-so-cheap baked pastry bread. Holds most of the bitterness in the spices, but there's a decent hop display, all things considered. Mostly an herbal hop. Has that cream soda kind of flavor, but again, royally spiced. Has a pale tanginess. I really wish there was more than just the idea of artificial pumpkin to represent. It tastes like the cakey part of a pumpkin roll with that heavy dollop of sweetened cream cheese filling. I mean, it's good. Is that what you, ultimately, wanted me to say?

Medium-thin. Carbonation is sizzling. Carries with it a light stickiness on the lips. However, getting it down is easy.

A fascinating little idea, and from the brewers you least expect it from. My girlfriend have a plan in place to acquire more of this. We enjoy it for guily reasons. Maybe you will, too.

Pours a medium cloudy brown with a lasting head. Aroma is sweet cream and vanilla.

Taste is sweet cream, vanilla and pumpkin spice with notes of brown sugar and lightly roasted malt. A bitter finish likely from the spices. The description on the label is fairly accurate.

“This fragrant ale evokes the rich, deep flavors of a spiced pumpkin cake rolled around a sweet creamy filling.”

Not my favorite pumpkin, but it is clearly unique from the vast array of pumpkins out there which is a good thing.

Really excited to try this one.

A - Pour is a bit darker amber than a bright orange hue one would expect with the style. Head is a nice creamy 1/2 inch.
S - Smells of pure vanilla I have only smelled only a few equal to the amount of pure sweet vanilla. Real let down as I get very little pumpkin spice just a smidgen of nutmeg and cinnamon. Little vegital smell is always nice.
T - Well to be honest its the weirdest pumpkin ale I ever drank most of the time I get sweet vanilla like malt, butternut squash and very little spicing (BOO!) but I kept swearing I was tasting a watermelon jolly rancher. I am reminded of the taste of "hell of high watermelon" beer but much more pronounced and not as vegital. Too weird.
M - Light to medium, somewhat creamy. Lager like.

Overall it has its perks not being too hop forward which is great for the style but the watermelon candy taste really put me off into wanting a second. Also not enough spice to really make it a true "pumpkin roll" Everyone else I got to try it liked it so I guess it is drinkable...

disappointing. While the nose is inviting, the beer is a bit thin, a tad acrid, and
does not satisfy. Was expecting more depth