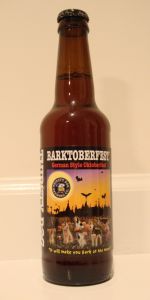 I got a bottle of this beer off the single shelf from my local Giant Eagle store. It poured a clear copper with white head that is leaving a spotty lace. The scent had subtle marzen malt notes. The taste was nicely balanced and easy to drink with good crisp clean start that finishes with caramel malt goodness. The mouthfeel was medium in body and had good carbonation. Overall it is a great beer.

Look: Medium brown color with a one finger head low retention, visible carbonation
Aroma: Caramel, biscuity malt, earthy herbal hops
Taste: Slightly sweet all the way through, a little acidic on the sides of the tongue
Flavor: Follows the nose: caramel malt with earthy and herbal hops.
Feel: Medium mouthfeel, slightly prickly carbonation,
Overall: Good beer, simple, drinkable, I would neither turn it down for put forth special effort to find it.

T: Candied caramel, it has the roasted sweet tang to it. It's one notch above crackery, and one notch below biscuity, and balanced by a moderate amount of hops. It's an approachable beverage. It could pass as a Dunkel Lager.

O: I like the Thirsty Dog Brewing company. I trust them to use quality ingredients and methods.

This beer marks the start of yet another (!) brewery horizontal as I work to eradicate the Bottle Backlog here at Chez Woody. I am thinking that these must have been part of a mixed-12 pack or a case at Country Garden Six Pack at one point & then they decided to single them out. No matter to me! I was happy to take one of each. I usually go lowest to highest in terms of ABV, but this first one is slightly out of turn due to the previous beer also being an Oktoberfest/Märzen. Please forgive my transgression!

Having washed the stein from the last bier, I was ready to go. A Pop! of the cap, followed by a slow, gentle C-Line pour & I was off & running (often running). I briefly got just over a finger of fizzy, foamy, soapy, tawny head before it fell to wisps. No matter. It was actually more than I got in/from the previous one. Color was a Coppery-Brown (SRM = > 17, < 22) with NE-quality clarity, although it was closer to 17. My point here is that it was deeper in shade than the previous one. Too many distinctions? Hmm. Nose was biscuity, but there was also a slight chocolatiness to it. It may not have fit for the style, but it sure made me think of Enrico's chocolate biscotti from Pixburgh's Strip District. Mmm. Mouthfeel was medium-to-full, kind of dense on the tongue, but not big enough to call "thick" or "full". The taste was an odd mélange for the style, mashing up chocolate, caramel & biscuits. 8=O I liked it, especially since it really was not at all sweet, despite the flavors. That said, the Germans would probably cringe at this being considered an Oktoberfest/Märzen. It is imperative to remember to rate to Style & not to personal Taste, hence my scores. Moving along. Finish was semi-sweet, but bordering on semi-dry. I liked it, but it was not what I was expecting in/from the Style. YMMV.

This one pours a fairly pretty golden orange color, with a small head, and lots of lacing.

This smells interesting - there's the usual breadiness and slight sweetness, but there's also a distinct chocolate malt note, and some definite toffee.

There isn't a lot of hop character here - it's all maltiness. It's maybe a bit too sweet for the style, due to that aforementioned chocolate note. That aspect does give it uniqueness points, however. There's that nice melanoidin breadiness, lightly sweet, and a nice creamy flavor.

This is medium bodied, creamy, and very drinkable. It doesn't finish quite as crisply as you'd want.

I'm surprised by how well this one worked out. It's got a very unique malt flavor for the style.

This has nicely toasty, nutty malt flavors with semi-sweet corn and hints of grape and light wheat. Depth and complexity of flavor still leave room for plenty of easy drinking.

The round body has a light, crisp froth, finishing with a semi-dry tingle.

Poured a copper color with a one finger white head that dissipated quickly to nothing. No lacing. Aroma was almost non-existent except for a peculiar mint overtone. As it warmed a bit a sweetness arose. The taste is hop forward with the malt taking a back seat. The flavor is a bit grassy. I am wondering if it is too cold. This brew is a bit thin and wet, with light carbonation. After comparing my experience with other reviews, I am disappointed. I was expecting more. It was not the freshness. Perhaps I am off today.

Rich, malty, sweet, this is one outstanding Maerzen. Pours a clear dark copper color, with a thin white head that settles rapidly without a trace. Aromas and flavors are unabashedly malt forward. Tons of dark bread and caramel, with notes of honey and herbal hops and a hint of molasses. Very sweet on the palate, with a mouthfeel that is on the silky side. Bitterness is quite low. Sweet finish that lingers on the tongue. I'd have preferred to drink this with some hearty food, such as a bratwurst or a greasy burger. As a stand-alone beer, it's better when cold.

Dollar bargain bin find! Leah and I are not lager fans in general, but this caramelly offering was enjoyable!

It pours a dark amber/red color with a very small white head. Smells of toasted malts and sweet caramel. Taste follows the smell. An easy drinking lager with a small malty backbone and a touch of sweetness to finish.

This beer poured a dark copper color with a thin white head that disapated quickly.

The aroma was sweet and bready with a hint of toasted malt and a bit of nuttiness.

The initial taste is the toasted malt that picks up some happiness in the middle. It finishes with a smooth nutty aftertaste. The beer is so well balanced that the beginning and middle are not all that discernible from one another. The finish is what stands out the most though. The nuttiness blends exceptionally well with the toasted malt notes. There is a slight hint of alcohol at the end that has some nice sweetness as well.

The mouth feel is well-balanced and quite smooth.

Overall, this is a really good example of an Oktoberfest with some subtle deviations that really make this beer standout from others within the style while still maintaining its most important characteristics.

Nice pour, a little head that lasts, pretty amber color. Fizzy on the tongue, with a balanced taste. I like the little bit of a bite in the aftertaste. Lighter and milder than I usually like in a beer, but overall a winner. I'll be drinking the rest of it with a meal, instead of after. And it does not seem like it has 6%ABV, so it might sneak up on you if you aren't drinking it with food.

Pours true amber, 9,10 on the srmn chart. Tan head of creamy foam that fell well. Clear and bright. 6% abv. Hops are sweet floral and spice. A bouquet on the nose. A little alcohol on the nose too. It smells sweet but tastes sharp. Malt is rich and has an earthy hearty scent. Rich and smooth. Drinks mellow and smooth with plenty of peppery spice to tickle from hops. Soft middle and richly malty. Hops stay herbal and grassy and in the background except for a nice brisk bitterness to finish it. A little warming from alcohol much like the vienna style lager. Crisp bubbles show you the browned crust on some bread at the end and a lasting hop bitter.

Barktoberfest | Thirsty Dog Brewing Company. Poured from the bottle into a pint glass, this beer's head is two fingers thick, with lateral lacing, and an amber-fading-into-gold body.

I'm tasting those malts and grains, along with a nice mild sweetness.

The mouthfeel is medium with mild carbonation.

Overall, I'll choose to give Barktoberfest | Thirsty Dog Brewing Company a 4.5. This is different(in a good way) from most Märzens out there.

Barktoberfest brewed by Thirsty Dog Brewing Company, with an ABV of 6.00% This brew pours out a nice deep brunt amber color with a small white head. I really like the copper color of this brew. The smell of Barktoberfest is rich with roasted grians and malts. There is also a real nice inviting sweetness to the smell of this brew. You also pick up some minor hops in the smell. Now for the taste, it is rich and bold with flavors. You first pick up on the sweetness of roasted grians and malts. There is also a nice caramel sweetness in the taste of this brew. The end is a slight bitterness from the hops. There is a lot going on in Barktoberfest, not saying that is a bad thing. Now Barktoberfest has a super nice balance to it, there is nothing overpowering about this brew. This is a real fine drinking brew. For me this is the type of brew that goes well with the season. The mouth feel of Barktoberfest, is rich, bold, clean , sweet, roasted, and refreshing.
This brew has a lot more going for it than others Oktoberfest brews on the market. This one is just so smooth and rich. It is really hard to pick up on the 6.00% ABV in this brew. Overall I'm giving Barktoberfest a 4.50 out of 5. I would buy this brew again. Thirsty Dog Brewing Company, did a real nice job with this Oktoberfest brew.