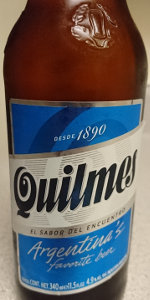 Notes:
View: Beers
Reviews: 249 | Ratings: 518 | Log in to view all ratings and sort
Reviews by TheLongBeachBum:

Now that Trader Joes no longer has the DFH 60-min IPA, I decided to picked up a Six-Pack of Anderson Valley Hop Ottin IPA tonight to stock up the regular decent tasty after work beer cubicle portion of my Fridge.

As I perused the Aisle for those lesser known TJ specials I spotted a new one. The icy white-blue arctic label of the bottle and the Six-Pack carton design caught my eye. Ill have to look where I am walking more carefully next time.

Lucid yellow color with a reasonable white head. Looks pretty average, but it is nothing outstanding. Nothing in the nose at first, deeper inhalation reveals a sickly sweet malt odor that is feint at best. Tastes are of a thin light pale lager, some malt, very light hops but incredibly delicate in nature. The merest hint of food with any flavor would relinquish this to a washing down beer. Even pretzels or peanuts would drown the meek flavor profile in this one. Mouthfeel is thin, but this beer is rescued by its crisp clean, mountain fresh spring water feel. Which means that this actually drinks rather easily, probably because it is light on flavor and has a crisp fulfilling feel when chilled?

Looks OK, smells crap, tastes of thin lager, low mouthfeel but crisp and clean with a good Drinkability. Oh yeah, 6.5% - What the feeerk? Nah, no way, come one, do they measure alcohol by volume differently in Argentina?

The beer has the words The Favorite Beer of Argentina on it. WTF?? Who is gong to believe that crap, oh shit I did, and thats why I picked up a bottle! On reflection, the advertising slogan sounds like The Favorite Child of Michael Jackson or The Favorite Battle Cry of France; no-one is going to believe it is either good, or even for real. Sure enough, its neither. Could this be South American AB (Argentine Bud)? Maybe!

Just really uninspiring shit. The sole resemption lies in that if youre swilling this its probably 3 in the morning, youre probably outdoors, and youre likely surrounded by the worlds most breathtakingly gorgeous humans. Vive Argentina!

Poured into a pilsner glass. Pours a light golden amber with an effervescent with head that dissipates to nothing except a thin ring around the glass. Light aroma of grainy biscuit malt and mild grassy hops. Flavor starts with grainy malt with a hint of biscuit, then fades away, revealing slightly astringent grassy hops with light graininess. Light bodied with active carbonation. The very first part of the taste gives hope, because it has a bit of grainy biscuit, but the flavor fades quickly leaving only the dry part of the malt and lightly grassy hops that are more bitter than flavorful. A mediocre adjunct lager that leaves only hope for a better introduction to Argentinian ales.

Poured from a bottle into a sleeve - a one-inch fluffy, foamy white head with a pale, pale yellow color to the body, and not much in terms of bubbles. The head dissipates into patches of foam and tendrils of lacing.

Not much for smell here - adjuncts, weak malt.

Taste is mild, sterile. Not much body, just watery malt, very little in terms of hops.

I got this as part of a beer sampler pack, and this was the Argentinian choice. I guess as a lawn-mower beer, it could work. But my advice? Drink this one cold, and fast.

One thing I noticed about this beer is the awesome shade of blue on the label. Not quite aquamarine or turquoise but not a royal blue either. Also, the "Q" in the label looks like a fish. Oh yeah, the beer. Basic straw color. Wispy, blah head. Lots of visible carbonation. Grainy, grassy nose with a mild touch of biteless hops.

Plenty of graininess in the flavor, but it's agreeable enough. Inoffensive and bland. Mostly lacking character, but the aftertaste is reasonably clean and overall this is at least average for a South American lager from a country more famous for red wine. I wonder how it would go with a steak.

Sorry for the belived most handsome people´s inthe word they have the worst beer sell in mexico, its remarked grains flavor made worst, its patagonian hops not help its flavor, but in general is good only one or two no more, they give a several head pain and cruda

Well, another good lager beer for hot days. IT is not that great, but is good for refreshing. Very crystal and light Yellow. Although I got i a little frozen. IS the most comercial beer in Argentina, and there is even a Football team with that name, and a lot fo teams has the QUILMES name in the T-Shirts.

Quilmes is almost an average lager.

Pours a very light golden color; Little head and little lace; Smells some corn; Flavor is of grain and wheat; Mouthfeel is watery and thin; A lots of carbonation; Drinkability is good.

I think almost all american macros are good for those hot days.

Pours a very light pale color with a small almost non existent head. Smells of corn and not much malt. First sip is tad bitter with an ok hop presence but not much flavor. Very light bodied with average carbonation. Very typical for beers from South America. Not enough flavor to be called a "beer".

Not much of any smell excepting a slight super sweet malty (rice?) smell. Pours to a pale yellow with a big bubble head that recedes fast but stays on the surface. Taste is sweet with hopping only in the far background at the start then coming towards the front in the end. Mouthfeel is very good, smooth with no overpowering carbonation. Overall, too sweet for me! If this is Argentina's favorite beer, as stated on the bottle, I think they know alot about wine, but are painfully ignorant when it comes to beer.

Smell is of adjuncts and pale malt simple malts, a sweet smell with a hint of flowery hop aroma.

easy to drink adjunct larger a very standard example of the style.

A: An attractive light golden hue governs this beer with swarms of bubbles moving around the pilsner glass. Snowy white head started off very fizzy but simmered down to a nice little cushion of foam which is fading quick.

S: Rice, soap and malted barley. A lot of a Japanese beer actually.

T: Up front floral flavors with corn pop like sweetness. A lot of adjunct tastes going on in here, almost artificial. Finishes mineraly with aluminum moments.

M: Thin but not too bad viscosity wise. Generally beers of this style are rough on the palate.

D: Not too much too my liking, but did have some positive characteristics. Taste wasn't up my alley. Nothing really negative to say about this beer besides its not really anything for me.