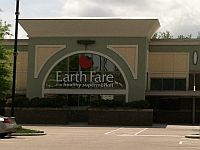 Reviewed by gabe23 from North Carolina

3.5/5  rDev -7.2%
Decent mix of American and European beers, with a few local brewers in the mix. I'd say the selection is slightly smaller than your average Whole Foods store, but they do have a few beers that I haven't seen elsewhere in town. I chatted briefly with the manager of the beer/wine section, and she was friendly and knowledgeable.

Since Total Wine is a couple of blocks away, I rarely stop into Earth Fare unless I'm buying something else anyway. But it's worth a trip if you've never been there.

Reviewed by CWiggins from North Carolina

4.15/5  rDev +10.1%
I've been in this store many times. It's one of a small chain of healthy foods supermarkets out of Asheville, NC. Since I just recently began reviewing beers on Beer Advocate, I thought it would be nice to make this my first BeerFly review.

When you enter the store, go to the right, pass through Produce, go through the bulk foods area, and then it's a straight line to the beer case. It's on the back wall and appears to be part of the Specialty department, which also includes wine, imported cheeses, olives, etc.

Cases are on the bottom of the case. No Miller, Budweiser, Coors, or Michelob here, although they carry Foster's and Corona.

A few tables in the middle of the floor are used for non-refrigerated items. Here they have the Chimay gift boxes, the "Historic Ales of Scotland" boxes, Val-Dieu, Weyerbacher, and Moosbacher, and single bottles of Sam Adams, Nostradamus, Gulden Draak, Piraat, Chimay, Rogue, etc. At present they have six-packs of Cottonwood and Blue Moon pumpkin beers stacked on the floor, along with the gluten-free Dragon's Gold by Bard's Tale.

Service is pretty good. The manager of the department, Sarah, seems to genuinely like beer, and she's very knowledgable. She's turned me on to several items I may have ignored. One gets the feeling she's been around beer for quite a while!

Prices seem to be comparable with every other place. Less expensive on some items, more on others.

Reviewed by Ninjaworm from North Carolina

3.7/5  rDev -1.9%
Located in Brierdale just down the road from the rest of Brier Creek the location is very easy to get into and out of compared to Total Wine in Brier Creek.

I have been very impressed with Earth Fare since it opened as they right away stocked a pretty good selection of craft beers. Each time I stop in I notice that they are bringing in new beers and alternating their stock. I have been asked by the cheese monger if I needed any assistance when they saw me checking out their beer selection. Their prices seem pretty much on par when comparing to other beer stores in the area.

Reviewed by Sayson from North Carolina

3.85/5  rDev +2.1%
This Earthfare location is the Raleigh outpost of a health food grocery store chain, ala whole Foods, based in Asheville, North Carolina. The beer is in a corner of the store just beyond and to the right of the cheese case. I haven't ever seen any staff in this area, so I can't attest to the ability of the help, but, as GCBrewing has noted, the staff in general seems quite helpful and courteous.

The beer selection is a mixed bag. They have some great beers, some good beers and some beers I can't explain. The have a wide selection of Medecino beers like Eye of Hawk. They carry the Great Plains Sampler 12 Pack, but none of GP's other beers. They carry some local beers like Edenton's Big Boss IPA. Still their prices are fair and they tend to carry certain beers that Total Wine down the block does not. This place has potential.

3.9/5  rDev +3.4%
Earth Fare is a new store location in Brier Creek South of US 70 in the Brierdale Shopping Center. It can be accessed off US 70 by going South on Brier Creek or off I-40 by taking the Lumley Road exit. There is quite a bit of construction in the same shopping center so look for the signs for the store.

The store is new and clean, but the aisles are cramped and difficult to move through. The quality is very good and the selection is decent as well with no crap beer in sight. Quite a few micros and a handful of higher octane selections. The prices are actually bordering on inexpensive in the beer section with the Rogue ceramic bottles of XS going for less than $12 at normal price. At the time of my visit it was customer appreciation day and everything in the store was 20% off including beer.

The beer section is in a corner, but be sure to look around since some beers are not in the cold case and others are at the register area. It's a bit of a drive for me, but if in the area I would suggest going to Earth Fare first and then you can skip up the street to Total Wine to find other selections. Earth Fare has most of it's selections in the cold case if you needed to pickup a quick sixer.

The service is hard to nail down. It was quick and friendly at the register, but no one, including the wine guy doing sampling in the beer/wine area, even offered assistance in the overcrowded (due to the sale) store.