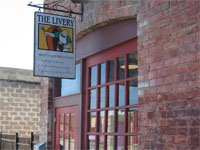 Stopped in for lunch and to sample some brews.I hate to say a place is not worth a visit but this was really a poor experience.
The bar was empty and service was still deplorable,the bartender was taking orders from people that were behind us after she clearly watched us seat ourselves at the middle of the bar (many) minutes before.There was a local behind us and she was literally looking over our head to take their order 1st and more than just once and not only to us.
Had a flight (Overpriced) amounted to 3 10 oz beers (5oz pours we were told...) at a cost of around $15 or $5 / 10 oz. If the beer was good that would be fine...
Had 6 beers,3 were astringent as could be,one was an ESB that was an american red ale/amber one was earthy beyond what the beer should be and the "grand Reserve" a 2 yr barrel aged Bier de Garde was flat out infected / sour ,I can't imagine on purpose either.
Ordered 2 pizzas.12 and 15 each for a frozen pizza.One came out in 25 minutes the 2nd one we were told they ran out of pizza sauce and they were making more...IT WAS A FROZEN PIZZA !!!!
The pizza magically appeared when we told the bartender that we wanted the bill we needed to be somewhere else...
The building was fantastic...
I'm not sure who is rating this place 4-4.5 stars but seriously,if you would like a nice beer this is not the place to go especially with so many other GREAT breweries so close.

I know people will write the review off because there are so many other great reviews for this place but seriously,I have traveled quite extensively to breweries and with so many other great offerings in the area ,Bell's,New Holland,Greenbush,Dark Horse and Paw Paw brewing your time and pallet will thank you for heading somewhere else.