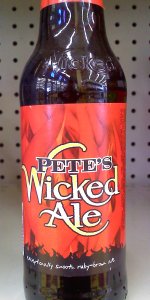 Notes: None
View: More Beers
Recent ratings and reviews. | Log in to view more ratings + sorting options.
3.16 by TP2MSU from Michigan on Apr 23, 2022

Pivotal gateway 90's beer for me. I was working my way through 100 "Beer of the World" at local bar to earn custom pewter mug, this one I enjoyed so much it kept the trend toward craft going.

Looks like we're gonna bang out a few retired reviews today. Pete's was pretty ubiquitous in the early to mid 90s, seriously was probably in as many shelves as Sam Adams or Sierra Nevada. Right about when Stone came on the scene, was kind of the death knell of Pete's. Mild malty gave way to uber hoppy in neckbeard palates.

Anyways, this poured a slightly darker color than Newcastle, middle of the road amber-brown, but without a big time porter like viscosity, this was mild brown ale territory. Reliable 1/2" light tan head nearly every time. Aroma put down the caramel over the earthiness portfolio of smells.

Taste was at the time, a hoppy brown ale. You'd never describe it that way by contemporary standards. Probably had an ibu level of about 20. Pushed the toasted malt toffee and caramel haracteristics in a way that hadn't really existed in American brews at the time. Around '93-94 it was preferred by myself to SNPA, which is crazy to think of such a thing the last 20 years (opposite). Carbonation was reliable as the product was, there wasn't much variation if any between the numerous 6 packs consumed.

Boston Lager and Newcastle overtook market share for this kind of beer, while the hop craze siphoned some others off methinks.

Mild Aroma of an almost sweet caramel malt with a light nutty edge to it.

Taste is pretty similar to the aroma with its sweet caramel and nutty grain malts, maybe a bit more sweet than the aroma.

A slight bitter drying aftertaste on the light medium to medium bodied beer.

The slight bittering effect of the aftertaste is just enough to make you want to take another drink.