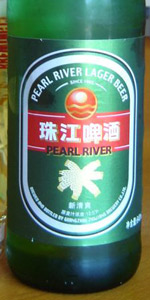 Notes:
View: Beers
Reviews: 22 | Ratings: 36 | Log in to view all ratings and sort
Reviews by arkanu:

Bottle: Poured a pale yellow color lager with a medium foamy head with good retention and good lacing. Aroma is pretty weak with some light sweet malt but no discernable adjunct. Taste is very bland but no discernable flaws either. Not much malt and no discernable hops but no major flaws or default either (adjunct, skunk...)

Consumed in mass on a fishing trip off Hainan Island in the South China Sea.

Taste: Sweet loads of corn or rice. Grassy and some grainy hops.

Drinkability: Low. If I wasnt stranded on some secret island, at some secret military base, unable to leave the dock and with nothing to do but catch scorpion fish and drink this beer until the guards returned with some German Shepard that our boat had been Shanghaied by the Red Army to transport, Im not sure that I would have cared for this beer all that much. Considering the circumstances I was drinking this under, Im still not sure I liked it very much.

Taste is sweet upfront with weak rice notes and hints of corn syrup. Develops mild cereal grain note with pearl barley on mid-palate. Bit residually sweet on the back, with nowhere near enough bitterness, just sweet and grainy, and overall very bland.

Fizzy feel but gently so, it needs fizz to cut through the sweetness but not enough, not a great job.

Pale lager yellow with a large bone white head that receeded to a thin cap & ring. All in all an average looking lager.

Very faint graininess and not much else comes to my nose here. Certainly lacking any spicy/floral hop that one would associate with a Euro Lager.

Watery is the first thing that comes to mind here. Some faint grainy-sweet malt and a touch of hop bitterness. Some mineral water taste from the 'Pearl River' perhaps is also present. Finishes quite dry, almost turning citric acid like minutes after tasting.

There are better Asian beers out there my friends.

Aroma
Familiar, skunky lager aroma, similar to Heinekin or Corona; nothing too appetizing

Comparisons
Its very similar and on par with the other H.K. beer I tried, Kingway; theyre both very refreshing and clean; aromas not great, but the flavor makes up

Overall
Great for a hot afternoon; one of the better cheap lagers Ive had; Im doubly impressed with Hong Kongs offerings as I liked the other one quite a bit for the style

Medium-light bodied, crispy and dry on the palate, slightly malty with green apple like fruitiness and slight carbonic acid bite. Bland with no hop flavor/aroma to speak of. (330 ml without BB indication, into tulip.)

Chinese should stick to what they make best - food - and leave brewing to others.

This is a direct import from China, and my can is greater than or equal to 4.3% alc/vol. Ingredients: Water, High Quality Malt, High Quality Rice, Hops...

A- Comes in a cool can that has the pull off tab and members of the Chinese National Basketball team, with Yao Ming as the focal point. The brew itself is urine yellow in color, with very minimal head...what there is quickly vanishes into nothingness. This is very highly carbonated and resembles pop..providing a carbonated ring around the glass at the top of the brew. There is also no lacing to speak of but instead an oily looking film covering my glass. Not very impressive to look at!

S- Typical Chinese lager aromas, being very similar to BMC type beer. Sweet malt/rice adjuncts dominate...it smells very similar to a piece of fermented rice cake dessert that I tried recently...not super appealing to be honest. I don't smell any of the hops that are said to be used in this either.

T- Well it tastes better than it smells, but not by much...it follows fairly close to the aroma. Again, there is sweet malt and/or rice, which actually keeps it clean tasting. The flavors are light overall and have a typically synthetic character about them. There is little to no hop presence either.

M- Thin and watery, which isn't unexpected...afterall, this is brewed for the Asian population and I think for the climate it's intended for, it works. It's very carbonated and scrubs the palate accordingly.

O- It's a very forgettable Chinese lager, and it's not one of the better ones. However, I would drink this again if necessary, as it's not offensive or anything, and makes a nice hot weather adult beverage if you just want something simple....I wouldn't purchase it though if I have a choice...

T not far from the smell but with a little lemon

M thin but well carbonated pretty much no aftertaste

D nothing awful but nothing worth trying, pretty basic brew

Very pale body with straw chardonnay-like gold hue. Pushes up a big effervescent and lively bulk of head that falls away all to quickly.

Aromatically this is rather boring with only the stereo typical run of the mill lager hops, yeast and malt notes.

As with the aroma, taste is very bland and almost a perfect imitation of the mass produced corona like lagers.

Where this beer works is its ease of consumption, its light body, clean after taste and its crisp refreshing mouthfeel - its a winner.

On a hot afternoon and/or evening you will be very happy with two or three of these. Likewise, a perfect accompaniment with a sizzling Tieban of szechuan or chili beef

I originally stopped in at my usual beer merchant to pick up Tsingtao (a personal favorite) to have with that evenings hot and spicy meal. When I learnt that Tsingtao was all out I was offered this is a replacement. Can't say this is worthy of replacing Tsingtao but still good all the same.

The best score for this one is drinkability.

Poured from a green 11.2 oz. bottle. Has a light golden color with a 1/2 inch head. Smell is of green apples, grains, not a good sign. Taste is green apples, some grains, a bit of vinegar, kind of bland. Feels light in the mouth and overall is not terrible, but not to my liking.

A - Fizzy white, one finger head. Fizzles out fast. Looks like apple juice. By the end of the review, I can honestly say that this is the worst looking beer I've ever seen. No carbonation left at all, seriously just looks like juice.

T - Some extremely light malt and rice. Really, really watery. Almost nothing going on here. Not even some infamous green-bottle-skunk. Not offensive, but not really anything...

D - Really not all that enjoyable. Seriously lacking in the flavor department.

Overall: Not a bad lager beer, would've preffered it without so much carbonation.

Drank it directly from an ice cold can (that's how you drink macro lager). 4.3% ABV.

As with most things made in China, this is a very bland and ordinary beer. It is flat and watery and there is way too much carbonation for my liking. The beer pours a very watery yellowish color, with an excess amount of head. The beer barely has a taste. It tastes more like a light beer out of a can. This is a very bad beer.

Served refrigerator cold. Side-poured with standard vigor as no carbonation issues are anticipated.

A: Pours a one finger head of no real cream, white colour, okay thickness, and average retention. Colour is a clear dark yellow. No visible yeast particles. No bubble show.

Sm: Cream and barley. A mild strength aroma. Not particularly appealing, but not repugnant.

T: Cream over a clean barley body. Very simple, boring, and bland. There's very little to say about it. Not layered, complex, or subtle. Very dull.

Mf: Smooth and wet, suiting the flavours of the body generally. Weak. Too thin. Carbonation is adequate but not ideal.

Dr: Drinkable in that its ABV is average and no flavours are particularly bad. But it's so damned boring. I won't get this again, nor would I recommend it - even for the price.

330ml Can from Yue Hwa, Chinatown, Singapore (SGD$ 2.30):
Light, golden straw that is clear and thin with a bubbly white head on top that sets as a patchy lacing that barely covers half of the surface area.

Sweet with water and light, grassy hops making up most of the rest. There are a few adjuncts but that's about it and it is very light.

Water with a hint of sweetness and the faintest of grassy hops on top. There is a bit of biterness but not much else to speak of other than a hint of citrus towards the end.

Thin and light with medium carbonation and a strange, semi-sweet feel with a hint of skunk and bitterness.

A very poor beer and up there with some of the worst I have tried although by no means the very worst. The beer was cheap and thin with little in the way of taste or smell.

When in Rome, or in this case a Chinese restaurant.
Looked OK to start but the white fizzy head disapated almost instantly, leaving a dark straw coloured beverage. Probably should have left it in the bottle than poured into the 1984 Calgary Olympic tulip glass.
Smells like a lager but with perhaps a bit more of some honey and grassy notes.
The taste was somewhat sweet and had very little else to offer.
The mouthfeel was flat and has a semi dry short finish. Had this not been cold and with a meal I most likely would not have finished it. The glass may have helped class this beer up a notch.