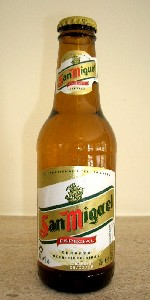 L:
-pours a clear golden with a big,foamy,white head
-medium to high carbonation visible
S:
-honey,spicy,grainy,corn,floral
T:
-Follows the nose
F:
-medium carbonation
-light body
O:
More malty than most "Premium Lagers".The malt base reminds me a lot of Staropramen, but with the typical low bitterniss of other "Premium Lagers"
A drinkable,if unexciting Premium Lager with a heavier malt base than it's competitors.

SanMiguel Especial, which come in a standard 330ml bottle with a medium ABV of 5,4%. Not to be mistaken with another beer named like that from the Philippines.

Poured into the Guinness it left a two inches white head quickly vanishing as I write this. Clear and golden yellow brew.

On the nose, it’s pretty dull some hints of floral notes and that’s about it.

On the palate, it’s again not opening a Pandora’s box of aromas of flavors, but that was expected for something I was fearing would be another mediocre industrial Euro Lager. It’s a bit richer than that. I like the dry finish and drinkability but I wasn’t looking for more from this one.

Overall it’s not as awful as reviewed here or elsewhere. Best drink fresh and cold, would probably pair really well with España food but in lack of a Chorizo or Paella right now, not to mention being quite far from the Puerta del Sol, this will be a one and done. Ticked, reviewed. Not a huge aficionado but there are far worse European lager around here.

Drank from the can and a glass, tastes like copper nails, tastes far worse as it warms up, very metallic tasting.

Drank from a bottle previous times and really enjoyed it.

This one (5,4% ABV) is far better than their 4,5% version lager, which most people have rated under the Philippines branch brewery, even though many of us obviously have had it in Spain. Anyway, the 5,4% version is quite malty, with a barely sufficient hoppiness. An acceptable premium lager, not great but well worth having with (or without) a meal in Spain. This rating is based on a bottle bought in Norway, had travelled well.

440ml can. 5.0% version, brewed in the UK by Carlsberg.
L: Clear, golden colour with many streams of bubbles. Excellent head is big, white, soapy & long-lasting. Served in a cold glass with beads of condensation, this is exactly how you want a lager to look.
S: Absolutely nothing.
T: Sweet & grainy. Negligible hop flavour.
F: Thin mouthfeel almost saved by moderate carbonation.
O: Incredibly bland. Designed to be drunk ice cold. Looks great and is well sessionable, otherwise poor.

PS. DO drink ice cold. This beer becomes sickly sweet as it warms.

Had on tap in Barcelona.

There seems to be general confusion between the two listings for this beer, and it seems because it is brewed in several locations, and the relevent one might not be indicated on the can/bottle. [I know the San Miguel available in SE-Asia generally is the one brewed in the Philippines].
I bought my 440ml cans in Waitrose London. They show the ABV% at 5.0%. BB: 26/5/19. 'Brewed and canned in the EU by Carlsberg UK Ltd, Northampton'. Does that mean it's not brewed in Spain, it's unclear to me.
L-Quite pale gold, High carbonation. Pours with 3-finger white head slowly reducing to lacing.
S- A little sour, and not much else to note.
T- Quite hoppy dry, into a richer finish than expected. After I noticed the ambiguous origin I feared this was another industrial euro-lager, but it has something more to it than just that.
M- I think it is well balanced between dryness and richness, and maintains refreshing carbonation on the tongue.
O- Nothing particularly disinctive, but nothing actively wrong either. This would be a decent session-beer to me.

It's kind of strange as when you drink the San Miguel in Mallorca, it's a pretty good beer, both as draft or in bottle. However when bought outside Spain, it seems to be different!

This apparently is brewed in Barcelona, and it actually called "Tradicion" as opposed to Especial. Not sure what the difference is, and couldn't tell from their website.

Spanish draft San Miguel I actually like and would give a good rating to. This however is very lifeless and not so great...

Anyway, aroma is very malty. Flavour is quite flat, but improves as it warms up slightly. Not much of an aftertaste and quite dry, very overtly pasteurized I would suggest.

Not a fan, it's a shame as the stuff in Spain is pretty good. Now sure about the Singapore version...

Interestingly on the bottle it does not seem to specify exactly where it is made, it's very possible this is a cheaper and totally different version of the Spanish one, from memory I have had a UK brewed one before that was not so great also...

The time has come to re-evaluate the San Mig. After a few years things tend to taste better, but not sure if this one made any difference since then. Tasteless lager with dry bitterness remaining in the mouth... German lager-esque? But it's okay, especially with food, despite its wateriness. Otherwise you might not want to be drinking it too much on its own...