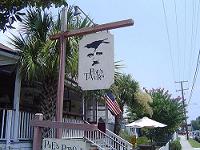 View: Place Reviews
Reviews: 11 | Ratings: 18 | Log in to view all ratings and sort
Reviews by jshusc:

this place is great. the line to get in is bad at times but I love the atmosphere, good food, and usually a few good beers on tap.

Poe's was packed when my wife and I went for lunch, which was to be expected, as it was tourist season (first week of June). Despite the wait (<45 min.), the experience was well worth it. Comfortable, relaxed vibe, excellent food (wife and I shared the Annabel Lee and Tell-Tale Heart burgers), and great beer selection, including some local favorites. And regardless of what other reviews say, service was great and very accommodating. Would definitely recommend.

Visited Jan 23 2014 during a cold snap (like 38 degrees, which is freakin' COLD for Charleston) - they had a roaring fire in the fireplace and a small but respectable crowd for an off-season Thursday afternoon. Found Bell's "Enjoy By" and that was all she wrote.

Apparently this place gets crazy busy during the tourist season (May-September, according to the bartender), but it's a local hangout during the offseason.

Is this place eclectic? Yes. If you're looking for brass n glass, look elsewhere. If you want a cozy neighborhood bar with lots of Edgar Allen Poe decor (including some kinda creepy styrofoam busts), friendly and knowledgeable staff, and a great selection of local and not-so-local craft brews, this is a must-visit.

Been to this place off and on when I lived down there and when I come to visit.

Atmosphere: They really nailed it. Its a fun place to hang out. However, I would avoid this place like the plague on the weekend nights and Friday nights. Tt is a mad house and service is almost impossible to come by. With that being said its a solid lunch spot to hit before or during a beach outing.

Quality: Something is up with the beer. Dont know if they dont clean the lines or if its the temp down there. Anyway the pints are still good but dont exactly taste topnotch.

Service: Even on a non crowded day I would try hard to sit at the bar, the bartenders are usally with it. Most of the wait staff are college age women that have bad attitudes. Its even worse at peak times. Poes has the market cornered and they know it.

Selection: For Charleston its above average. Not the best but good especailly for the islands. Lots of Coast, some mainstream micros, and some imports. They had Delirium on tap.

Food: Always good. Burgers are the way to go. However the fish tacos are awesome too. The fries are some of the best ive had.

Overall its def worth the trip at least once. Just go during the week or for lunch. A bit pricey but comes with the territory.

Went here during a recent trip to the area. When I went back to my car I found I was blocked in by a government official. I wanted to stick around, see if it was Joe Louis, if it was hit his car with mine, and when he yelled at me for hitting his car I could yelp "You lie!".

Atmosphere is good. There's a good deal of seating on the porch outside and a whole lot more inside. There's a relatively short bar immediately to the left upon entering with tables to the left, right, and back. There's Edgar Allen Poe everywhere, including in the bathroom where pages from his book are used as wallpaper.

Quality is good. Everything I saw was in a pint glass but it was served at a good temperature with a nice amount of head.

Service is alright. We had to wait a while to place an order and then even longer to request extra condiments after receiving our food. They were busy but it could have taken less time for sure.

Selection is OK. A lot of the usual suspects but with nice additions of SN, Stone, and of course COAST. Not stellar, but also nothing to sneeze at.

Food is very good. Their fries were solid and the variations on burgers were also not entirely original but each had their own twist.

Value is good. The beers were slightly on the expensive side but nothing terrible and the value in food makes up for it.

Overall this definitely isn't a place to go out of your way for beer-wise but if you're on Sullivan's Island it's definitely worth checking out.

First off I love the look of decent beers on tap at a bar in the middle of nowhere! First appearance is a small overly crowded bar with semi loud music playing... But look closer and you'll find an excellent burger menu with a chicken alternative to each style. Fish tacos and good beer on tap for the drinking. Wood flooring and strange Poe art make this a nice lunch and chill out. Service was good with decent selection. Decent price and a all and all good time. Me and my girlfriend enjoyed the atmosphere as our vacation had just started and with friendly people and great drinks mixed with a little sun we had a great time.

I have been here several times over the past three years or so. For some reason, I havent reviewed this place, so here it goes.

Awesome atmosphere. There is an outdoor/indoor bar at the top of the steps as well as outdoor seating in the courtyard area. I have NEVER sat inside, even in winter, so I think the atmosphere is pretty cool.

Service, however, has taken a severe turn for the worse. It takes forever to get anything, whether sitting at the bar or at a courtyard table. I am not sure why; it seems they have enough workers. Service needs a big improvement.

Food is pretty good. I always get a hamburger and have never been let down. My only complaint is that the burgers are mostly bun and little (relatively speaking) burger. I hate that more than anything.

Prices for beers are outrageous. Six dollars for a local COAST beer and 5 for everything else. I just cant handle an "over $5" beer. Be that as it may, good atmosphere, average everything else.

To me this is more of a cool place to eat lunch and hang out. Not an awesome beer bar, but a decent one. Way to much macro shit and lost of crap on tap. But they do have some decent selections that make this beer worthy. I very highly goign there anyways because of the history and atomosphere. The hamburgers are way up there on the list and they have some intresesting comobnations and all named after his books. Service was decent even though we were there on a busy sunday afternoon. Looks liek this place is a hit with locals and toursists which probably makes this place packed all the time.

When ever we're in Charleston we make it a point stop by this place. Great location, and the scenery is great( half dressed beach babes). Good to great beer selection and they usually have different drafts on order each time I go, so they are not afraid to try something new. The best part is that you are allowed to bring your dog to this place. They even cater to the pooches by bringing out a water bowl and dog biscuits. Nothing like having a dog at a beach bar, it is a total chick magnet!
The burgers were awesome! They have one burger that is served with a fried egg on it! And the fries are from from fresh potatoes. I believe I paid $9 for the burger which is about average for Charleston, and $4.50 for a Hoegarten Draft. Two thumbs up for me on Poes!

Went here this past weekend, due to the fact that the beach was uninhabitable with 30mph winds. As said previously, the atmosphere is great, and was by far the most hopping bar on Sullivan's. They have done a good job of creating a dive beach bar with good beer. They have a lot of beers that are not listed on the menu, so make sure to ask the server. We sat outside of the porch and did some people watching. I was very impressed to find they had Hopart on draft. The nachos were exceptional as well. This is definitely my favorite bar on Sullivan's.

I've got to set the record straight. Everybody that works in the business knows that Poe's atmosphere is killer, but that their service is almost always bad. Most often you wait even if they are not busy and often the bartenders act as if they are doing you a favor by giving you service. Furthermore, they may have a great beer selection, but their beer lines run from a cooler outside behind the building, under the restaraunt which is on pilars therfore not climate controlled, and up through the floor. Thus the beer goes from cold to hot and then cold again in about a 100 yard line. It makes for one really bad pint of beer often. The food at best can be good, but most often is alright.

This place has actually been around for quite a while, but I never thought it would be worth going to. I went there tonight, and I was sadly mistaken. This is one really cool place. Fist off, it's called Poe's Tavern, after E.A. Poe, who was actually stationed at Ft. Moultrie, which is just a few blocks away. On the outside, it looks like an old southern beach house, complete with hurricane shutters and such. On the inside, it's full of E.A. Poe stuff, as well as cool beer posters, signs, glasses, steins, etc... Quite a few of the beer posters are Belgian, which only makes you sad, cause SC only allows beers up to 6%. The service was friggin' astronomical! We got our food/beers in 5 minutes, and the place was packed tight full of patrons. As soon as we were done, we asked for our bill and got that taken care of in less than 5 minutes. I love really fast, efficent service like that. There is only 3 macros available, Bud, Coors, and Miller Lite. The rest are micros, crafts, and imports. Food was also great. I had the chicken breast sandwich, with guac, pepper jack, pico, lettuce, tomatoes, and pickles. This place is highly recommended.