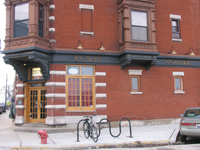 View: Place Reviews
Reviews: 50 | Ratings: 132 | Log in to view all ratings and sort
Reviews by sweethome:

Stopped in at about midnight on a Saturday night. Most tables were full - we sat at the bar where there were several stools open. Beer approximately six taps - all good quality - at least one cider. The bartender ignored us for several minutes as he conversed with some people next to us. That was a bit odd - he didn't even say he would be right with us. Later, after they left, he ended up conversing with us as he ignired others who had come in. Not the best service.

Very loud heavy metal playing on their system. The decor is interesting - nice fixtures, open kitchen, some prints of women in leather. Mens room was fairly clean for midnight on Saturday!

We ordered a Great Lakes Elliot Ness and a Surley Furious. I was excited to see the Surley on tap - never seen this in Chicago and only have had cans. It showed up and I knew it was Bender (Brown ale) not Furious. While disappointed I couldn't try Furious on tap, the Bender was excellent. The Ness was also of great quality. I late had a Can and Ebel (Two Bros) and it was also good.

The food menu is dominated by a wide array of burgers - listed as best in the city. We split a Kuma burger which had bacon, cheese and an sunny side up egg. Great quality beef - big burger. Fantastic fresh cut fries. All this for $10 - a good quality/price ratio.

Cool Place. Love the vibe. Great Metal. Service was outstanding. Beer selection was large, they have Schneider Weiss! The food was tasty.

The original Kuma's. I have been here once. We got there right when they opened and we were seated right away. When we left there was a line out the door. Great burgers and fresh cut fries. My buddy liked his mac and cheese as well. The selection of craft beer is very good with fifteen taps and around sixty bottles/cans. Heavy metal music and videos played at reasonable a volume. Recommended.

Best Burgers in chicago! Cool environment and great selection of food and beer.

As a dyed-in-the-wool metalhead, this is pretty much the ultimate beer-and-burger joint.

Stopped here after a Beer Temple trip. Burgers are enormous and they have some cool appetizers. Beer on top is solid, and some good bottles. Not a ton of options, but what they have is good.

Kuma's Corner's burgers are as good as it gets. The service is always great, even when the line is out the door. Beer selection always small yet well thought out. Usually a Three Floyds selection available. Stellar, always bring out of town guests here!