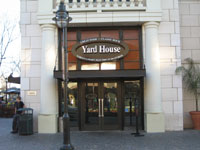 4.08/5  rDev -1%
vibe: 4.5 | quality: 4.5 | service: 3.5 | selection: 4 | food: 4
Decent set-up in a shopping "city walk" style set-up. Good place to sit and drink beer while my wife shops. The place was more open than the Yardhouse in Vegas, and better lighting, as well. Decent beer list while we were there, but our server was not overly knowledgeable about the list. They have a spot on the menu recommending to ask about the rotating taps. When we asked the server, all she could keep talking about was the "6-pack sampler" they offer. We had to decline the sampler two or three times (it currently had Killian's and Smithwick's on it, which you can get ANYWHERE). The food was very decent, and the prices weren't bad at all. I'd go back again, as soon as the wife needs to go shopping again.
Jan 31, 2011

Reviewed by jdhilt from New Hampshire

4.6/5  rDev +11.7%
vibe: 4 | quality: 5 | service: 4 | selection: 5
The Yard House, is in an ideal location - kind of in a indoor/outdoor shopping area, while my wife can wander aimlessly shopping, I can enjoy some really good beer on-tap like Piraat or Trois Pistoles or 114 other beers they have on tap. Too bad they are 3000+ miles away, we need one here in southern NH. Busy on a Friday evening, but service was good and prices were not bad for California - $6.50 for the Piraat. If you want an outside table the wait may be awhile but it is worth waiting as there is a band playing on the green outside - at least on Fridays.
Jun 14, 2010

Reviewed by TheMadJack from Virginia

3.75/5  rDev -9%
vibe: 3 | quality: 3.5 | service: 3.5 | selection: 4.5 | food: 4
This Yard House location is right down the street from me. While there's not much difference between Yardhouse's (save for the token local brew), this one's proximity allows me to go on weeknights when it's a bit quieter and the service isn't as stressed.

Overall, the place is nice but unexceptional. It's your typical dimly lit casual dress sit down restaurant. The colors are warm (if dark), the booths are roomy and the tables are spaced such that you don't have to share conversations with everyone around you. They also have more than their share of TV's, which is a pet peeve of mine. It is impossible to sit anywhere in the restaurant without having line of sight to an idiot box.

Service is usually prompt, sometimes too prompt. Especially if they're not busy, you can get asked for your drink order before you've even picked up the beer menu. Not a bad thing, in the slightest, but a little disconcerting at times nonetheless. Server knowledge is hit-and-miss, presumably based on how long they have been working. Best to go in either with a good idea of what you want or a sense of adventure, as any recommendation has an equal chance of being useful or just being what the server likes so far. I've also seen quite a bit of bad pouring technique in the bartenders. In any case, your drinks will be on the table quickly and the food has always arrived hot.

The legendary selection is actually a bit underwhelming. Of the 80 or so beers on tap, a disproportionate part of the menu was wasted on macro-swill. There is also not much variation in style. Instead of having 2 or 3 beers for 30-40 styles, they have 5-8 of about 8 styles. Most Yardhouses also keep a "local" breweries samples on hand. This one seems to represent Stone and Lost Coast, with no more than 2 selections from each. (Aside: Arrogant Bastard is a fine beer, but what of their Russian Imperial? Their IPA? Or even the Oaked Arrogant Bastard?) I guess what I'm trying to say is that I was disappointed that they didn't take more chances with the selection. Still, the amount of beer is nothing to scoff at and you will find something that will accompany your meal appropriately, and they are one of the few places I can think of with a wide enough selection that I can have a crisp, bitter beer to whet my appetite, a hearty, complicated brew with my meal, and something nutty or sweet to round it out as dessert and be satisfied with all my selections.

The menu has it's high points. They have some odd stuff (remnants from the days when mango and crab were what you added to make things "exotic". Damn you Emeril ...) but it's mostly solid, savory food. I'm a fan of the Mac n' Cheese2, which, aside from being mighty tasty, is also likely the best bang for your buck. Their steak dinners are a little anemic, though the steaks are juicy and the grillers know the difference between rare, medium rare, and medium.

Still, you pay a bit much for your drinks unless you come in during happy hour, and the food is kinda pricey. Sure, you get a steak, but the alleged side dishes are mostly decorations. And I am willing to pay a little extra for beer if it keeps me out of there during a dinner rush or happy hour: the place gets extremely noisy and crowded, and the service drops noticably. In addition, the place fills with cretins swilling Bud-Lite by the pitcher and shouting "WOOO!" at the TV screens. Definitely not conducive to the enjoying simple meditations that come with a hot meal and a beer.

Reviewed by joecast from Australia

first thing we noticed was how loud the music was inside the place. you get used to it after a few minutes but having two kids with us, it was a concern. in the end it caused no problems except for the waiter being able to hear my order. asked for a deschuttes pale, and got the porter. that was the only hiccup of the night really.

if you have never been to a yard house, this is a good one to visit. while they are all basically the same, this one just seems more upscale. lighting was pretty dim, but the place looked clean and well looked after. the game was on most tvs while i would guess only a few were there specifically to watch.

service was really good except for the one issue already raised. food and drinks were brought out quickly and the level of attention was right where it should be.

selection is standard yard house stuff which is pretty good for this type of restaurant. didnt notice anything out of the ordinary. the porter and stone ipa were both good.

food was real nice for all at out table and for the price, i cant complain about the quality or selection in the menu. this is good place for a large group for dinner or just a couple of friend hanging out at the bar.

4.08/5  rDev -1%
vibe: 3 | quality: 4 | service: 4.5 | selection: 4 | food: 4.5
Visited for early dinner on a Saturday night, this local favorite (read: very busy) is typical of the chain, a big open room, with a central walk-around bar showing off its marvelous 100 or so taps in a racetrack setup. Atmosphere was loud and as it got busier, quite crowded/claustrophobic- by far the worst part of the experience.

Beer selection and quality were quite good- not a lot of big beers, but a lot of quality craft beers. A lot are west coast beers, but they have a nice distribution of English (Fullers, Youngs), German (Spaten), and a couple of Belgians (Lindemans, Hoegaarden, Piraat) to round out the lot. Generally a good list, something for everyone. However, as expected, a lack of lesser known or extreme beers- why doesn't anyone carry saisons?

Food was very good- I had sea bass and my wife had the filet, and although not world class, they were pretty good bringing a "fusion" style to it- the sauces were quite good. Much better than many chains.

Service was excellent- not sure if we got lucky, or if this is typical of the chain, but our server was very knowledgeable in terms of their menu, their beer, and even pairing of the two. Even though it was busy, he took time to talk and share. I almost gave it a 5- if I go back and it's just as good from another server, I'll raise it up.

Reviewed by koolchas from California

4.4/5  rDev +6.8%
vibe: 4 | quality: 4.5 | service: 4.5 | selection: 4.5 | food: 4
what can i say, i love it, love it, love it. the yardhouse in r/c is just about a weekly friday visit for me. i have not found a better happy hour. a great selection tap beer with many of my favorite belgians on tap (gulden draak, piraat ale). the appetizers are very good (and half-off) for happy hour. most places offer a buck off or only a macro for a cheap happy hour price. with the yardhouse every brew is availabe is $3.25!

my only recommendation, try to arrive as early as you can if going for happy hour on a friday. the place gets packed after 5pm. i always try to get there before 4:30pm.

what can i say ... you won't go broke with happy hour at the yardhouse. yeah, it's a chain and may be a bit plastic but, this IS a good place with good value ... be like me and zone out the plastic types and enjoy your beer and food!

Reviewed by MiScusi from California

3.6/5  rDev -12.6%
vibe: 4 | quality: 3.5 | service: 3 | selection: 4 | food: 4
Your experience at any Yard House pretty much depends on what time you go. If you are there for lunch or the afternoon happy hour you will find it a somewhat relaxing place, with good service. If you go at night, namely on a Friday or Saturday you will be treated to a very loud, packed place which caters to the early-20 year old partiers. Now granted, that describes me, but for those of us who are into our beer, this place is not good on those days unless you want to wait a long time to get pints, or have music blasting in your ear. All other times are great to get a pint from their 60 or 70 taps. The bartenders know next to nothing about the beer they are serving so don't expect to have a nice beer-centered conversation. Yes they have tons of taps, and are known for their beer selection, but the bartending there is geared more towards what the younger crowd wants such as martinis and all the new shooters.

The moral of this story is go here if it is a non friday or saturday or if it is in the early afternoon.

Reviewed by VegasBill from Nevada

4.2/5  rDev +1.9%
vibe: 4 | quality: 4.5 | service: 3.5 | selection: 4.5 | food: 4.5
This is a newer location in what would be best described as a "small village" filled with stores,smaller shops and restaurants that are also new. There is plenty of parking close by.
The Yard House itself is the same as all of the others with a huge beer selection and better than average pub food but somewhat expensive.
Also this location, I guess the same as all of the others, is very busy and sometimes full.
I recently went two days in a row and the first day spent quite a bit of time talking with my server as he would come and go and even new his name. The second day he was there and I gave him a warm greeting and said hello and he did not even know me.I think this is what is referred to in Ca. as "plastic people"
Anyway I will return for the beer and the food