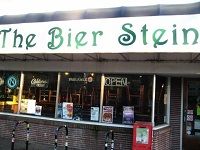 View: Place Reviews
Reviews: 41 | Ratings: 76 | Log in to view all ratings and sort
Reviews by jbakajust1:

I love living in the same city as the Stein, and especially working 2 blocks away. They have a great staff, very friendly and knowledgable. It's awesome to walk in and everybody greets you by name. They have breweries come in for free bottle tastings, special "brewery only" beers on tap, etc. Menu is amazing, best beer cheese soup I've ever had. Hundreds of bottled beers to go or to enjoy at a table (only draw back is that there aren't enough of them). Every special release, top rated beer (distributed to OR) you can think of. 10 taps, 1 on Nitro, always a sour on tap (flander's reds, oud bruins, JP, lots of RR, Cascade). Love that I can talk to the beer orderer about new releases and beers he knows I would enjoy. The owner used to be a brewer, and a couple times a year he goes to the local breweries and brews his own (awesome) recipes on their system and taps them at the Stein. Only draw back is the crowded space, lack of tables, but rumor has it there could be an expansion in the future!

Spent a glorious afternoon in this amazing pub!! Just amazingly relaxing and wonderful in every way!

Wonderful tap beer selection. Also have about 20 refrigerators with bottles. Yes, you can definitely find whatever you want to quench your thirst.

Food was also delicious. I had a large pretzel with a side of homemade pickles. Also had a wonderful charcuterie plate. Truly yummy! I also like that they make a lot of their food as well as source a lot of locally made products.

Overall, it was a glorious few hours in Eugene sitting at the bar in this pub. I highly, highly recommend it!

Had lunch, a nice guada and turkdey sandwich . Nice variety of draft selections, quite a few bottles to choose from, though they did not have the German beer I sought. For eugene , it will be your best bet for a good variety

Great place. Eugene is the best. The only thing that sux is beer snobs.. I love craft beer but Im poor. The people who make great money go to these places all the time!

Excellent bottle/can selection. Priced to drink on site, but 20% off for to go. Staff knows beer! Highly recommended. I'll be back.

The Bier Stein is a cool place to grab some great beers (also hard to find beers) and food. I really like the tap display. Shows how much is left on tap in real time. They always seem to have good events too. I really liked the Block 15 sticky hands release party or the PTY rr day. Sometimes i don't get food there tho. Theres noting wrong with the food but its sometime too much cash for a few beers and food.

This place is the best. When I moved to Eugene they were still in the little shop on 11th. Since then, they upgraded and expanded into their current location on Willamette. You go for the beer, but then you stay for the beer and food. Service is great, especially when the ewench system is working well. Pro tip: go grab your first beer and a menu, and open a tab. Then find a seat, peruse the menu, plan your next beer and place your order on your phone.

If you stand in front of the 1200 or so bottles they have for a minute or longer somebody is bound to ask you if you need any help. Super knowledgeable staff.

Throw in the pool table and big screen projector and you have yourself the perfect beer bar.