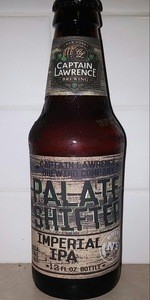 Notes: Hops, and lots of them. The aroma is bursting with the classic citrus and pine aroma of American-grown hops. The flavor is dominated by a hoppy bitterness, with just enough malt to make you want to take another sip. (Formerly known as "Captain’s Reserve Imperial IPA.")
View: More Beers | Place Reviews
Recent ratings and reviews. | Log in to view more ratings + sorting options.
Rated: 4 by robebo44 from Virginia

Reviewed by tillmac62 from South Carolina

Quite outstanding nose of bright citric and tropical hops over a slightly sweet base that is both bready and biscuit. Orange and light tangerine provide the citric element while pineapple and soft mango take center stage. There is a very soft spruce/pine element but you have to look for it.

The body is almost medium and quite smooth with a bit of oiliness to the texture. The carbonation / body balance is borderline outstanding. The middle is nicely effervescent and really opens the flavors up just past the middle. The finish isn't rollicking but does yield a nice prickly effect.

The flavor profile is quite outstanding. The rich nose doesn't quite follow through. The citric and tropical elements are there and shine in the middle. Orange and mandarin lead then shift to the sweeter tropicals (soft pineapple, light mango, then big pineapple). Like the nose, the world class balancing sweetness is bready then shifts to cracker biscuit near the end. Bitterness is surprisingly moderate yet ample and the balance is again world class. The bitterness is a combination of zest and spruce. Near the end, alcohol becomes slightly uncovered and fosters the spicy pepper element of spruce. The finish lingers and is mostly a blend of zest and spruce coupled with that nice alcohol burn at the back of the throat.

Reviewed by Wi_brew_bud from Connecticut

4.75/5  rDev +14.7%
look: 4.75 | smell: 4.75 | taste: 4.75 | feel: 4.75 | overall: 4.75
I love imperial IPA and Dipa they are my life. I think that this is a master piece it is next to perfection. It caught me off gaurd cause I chose it at random when I did a Mix pick at the grocery store. I poored it and was watching a movie not even paying attention to the beer it was my second IPA of the night. I took a sip an Bam. I knew it was a 90/90 I was expecting a punch to mouth but was smooth as a 40/40. The abv on this is not there at all. Most thicker IPA's make you pay for it with strong boozy tastes. Not this one the alcohol is almost silent as the citrus and hops and an almost roast nut flavor just hugs your tast buds it was a tease that I only grabbed one cause Wow. I can definitely agree with Beer bros this is world class. You can really tell the a lot of hard time and effort was spent creating this amazing beer the best part is that it wasn't like a $20 bomber. But it could definitely earn a seat at the table. Definitely a must try for any pale ale enthusiast! I will definitely seek this one out in the future!
Aug 20, 2017

Reviewed by Kayakguy from Massachusetts

Rated by Robert17529 from Pennsylvania

Nose is sweet peach nectar, which really shines after a swirl (and is more subdued without). A not very ripe tropical fruit skin bitterness is sensed on a calm beer, and a sharper ripe spring onion after a swirl. I've never noted a beer be so different in sense and strength swirled and not.

Taste starts clean, allowing a lightly alcohol burning/biting note to hit me. It doesn't come alone, but strikes me more than the peach, pineapple, green pine cone flavor I also get. The latter is nice, the former doesn't work as well for me. A raw herbal bitterness and a clean, Pilsner malt-like maltiness close the beer (another nice aspect).

I liked a good number of aspects of this beer, but I also was not a fan of others. I can see why the ratingbis high for most. If the nose was more obvious or less hide-and-seek, I'd rate it higher individually. So it could inch higher, but my overall is decent n the verge of inching lower, so that may be a wash.

HEAD: ~3 inches in height. Off-white. Frothy and creamy to style. Retention is rather good for the high ABV - ~10 minutes. Leaves a thick coating of lacing on the glass' sides as it recedes.

Appears well-carbonated. It's a nice looking imperial IPA, but the appearance isn't unique or special.

AROMA: Fresh citrus jumps out of the glass, hitting juicy notes of fresh tangerine and evocative mandarin orange along with lychee, passionfruit, and papaya. Pale malt sweetness keeps any hop bitterness in check, but all the hop flavour is there, and this aroma is more expressive and vivid in terms of its fruity hop notes than any I've encountered this year. Though there's a blip of alcohol warmth, this is a rather inviting lively aroma that promises a balanced beer with loads of hop flavour. I'm eager to try it.

No overt yeasty notes or off-notes. Aromatic intensity is moderate.

TASTE & TEXTURE: Opens soft, welcoming the drinker with early notes of soft lychee, mandarin orange, and faded tropical fruits (papaya, tangerine), hitting the citrusy hop flavour nicely but not to the extent the aroma promised; it's not all that fresh, expressive, or juicy. Sharp zest intensifies as the flavour profile runs through its structure, culminating in a sharp overcarbonated zest-forward finish plagued by a warm alcohol undertone. Not boozy or "fusel" as the kids are want to to call it, but definitely warmer than would be ideal.

The result is a beer that evokes a booze-soaked tropical fruit profile akin to overpriced girlie drinks on some island resort, giving it a cheap taste. The shallow depth of flavour doesn't help.

Flavour duration and intensity are average. Not a balanced brew in terms of alcohol presence, but the pale malt backbone is enough to prevent the hop bitterness from really hitting the palate hard. It's not badly built all things considered, but the aroma promised so much more than the taste delivers.

Smooth and wet, but too boozy to be refreshing in spite of its relative softness. Certainly overcarbonated (sharply so in the third act), and a bit thick. Creamy, hinting at orange creamsicle when coupled with the citrusy flavours. A softer, juicier, cleaner mouthfeel would be ideal, as would less overt alcohol.

OVERALL: I've lived in New York six months and as much as I keep trying to get into these Captain Lawrence hoppy ales, I never seem to like them as much as everyone else. I commend the brewery for their sour ales, but this hop profile isn't great, the beer doesn't deliver on the promises of the aroma, and it's way too alcohol-forward for my taste, tanking its drinkability. Not a bad beer by any stretch, but far from world class. Won't dazzle the discerning drinker, and I wouldn't buy another 4 pack, but I'll enjoy polishing off the one I got. Decent at best...do I just keep stumbling across old bottles from this brewery or something?