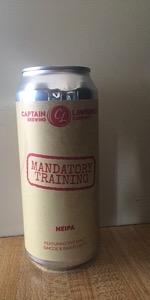 The latest addition to our quarterly line-up of New England IPAs, Mandatory Training explores the impact different grains have on brewing. This batch's subject? Rye!

Hints of stone fruit (think mango and apricot), tangerines and white grapes bring the juciness you've come to expect from our NEIPAs. A healthy dose of rye malt sets Mandatory Training apart by providing a spicy, earthy finish that accentuates touches of bitterness.

Soft ripe fruits on the nose, melon and mango.

Tasty, smooth and approachable brew, soft tropical fruits again coming to mind, perhaps mellowed and muted a bit by some extra time in the can....dry in the finish, with grassy hops expressing them selves....pleasing a worthy brew...glad I was able to procure a can and get to sample this offering from the good Captain.

Appearance: The body is very hazy, nearly opaque, with various shades of orange. The head is medium-sized, white, and consists mostly of medium sized bubbles. There is a little lacing and the retention is good.

Aroma: There is a strong scent of wildflowers mixed with a bit of lemon and pine aroma. There is an underlying caramel malt scent to the beer.

Taste: Up front there is some pine. Towards the center of the mouth it transforms into pine with lemon and lime, then it pushes towards the rear of the palate where it finishes with a bit of grapefruit but mostly pine. Aftertaste is pine. There is a malt character to the beer as well, that kind-of just lingers around on the palate without offering any character. The hop flavors are good though.

Mouthfeel: The body is on the heavier edge of light. Bitterness is way to high for a New England style IPA.

Overall: The label on the can states "NEIPA" however the beer really feels more like a hazy Double IPA than a New England IPA. The hop flavors are pretty good but I wouldn't recommend it to somebody looking for a NEIPA. I could drink it again, knowing what it is, but I wouldn't buy it as a NEIPA.

So, this is supposed to be the first entry into what is to-be yet another new series of hoppy beers by Captain Lawrence Brewing Co. Holy hell guys, are you getting paid per series? This brewery has had Powder Dreams (a series focused on cryo hops), Tears of Green (which seems to utilize odd hop combos), Soft Swerve, and Smoothie Dreams (which seem to both be milkshake IPAs...? Huh?), not to mention Orbital Tilt (rotating single-hop pale ale series), or their... Carvel collabs? I don't even know what they're doing honestly, but most of it is actually pretty good overall, so I figured I'd grab a single of this (and their new WC-style DIPA, cuz, whatever at this point).

Mandatory Training (Vol. 1, I guess we'll call it) is brewed with rye malt as well as Simcoe and Bravo hops. It is a New England-style haze IPA despite the use of these traditionally "West Coast" hops, mind you. The pour is a very hazy, nearly-opaque sunburst orange color with a retentive head of bone-white foam which sticks around at about a quarter-finger even after ten or so minutes in my glass. It leaves behind some superb lace and legs, and has moderate surface coverage to boot. I'm alright with how this looks, for sure!

The nose is earthy, spicy, and pine-y, pretty much in that order, though there are notes of grapefruit, sweet orange peel, tangerine, and leafy greenery in there. These aspects come to prominence after a few minutes of sitting in my glass, and the citrusy nature of this beer reminds me of some bygone West Coast IPAs itself, albeit with some plastic-y notes and light, funky, doughy spice backing it all up. Honestly, this isn't the most aromatic IPA I've had lately, but what's there is plenty redolent of the hops on order. Simcoe and Bravo are similar in some senses (citrusy and bitter-forward) but their subtleties are different, and the varietals come off as almost competitive in this recipe. The pine notes of Simcoe are muted by the aggressive straight-bittering aspects of Bravo, especially considering the citrusy nature of both. It's like they overlap and cancel each other out for some reason.

On the tongue, the rye is a distinct aspect, calling a great deal of attention to itself immediately. That earthy spice and light funk is prevalent throughout the entirety of the first half of each sip. The hops barely do anything at this juncture, but they all kind of coalesce messily toward the mid-to-finish transition, which feels, honestly, sloppy. All of a sudden there's this huge smattering of tangerine and over-the-top citrus that doesn't mesh well with the grain profile, and it kind of messes my palate up in an unforeseen way. Man, it's never fun to write something like this, but this one should be taken back to the drawing board. The feel is good, sure, but since the flavors have almost no finesse to them, I can't with good conscience recommend this beer. I will try the next iteration of MT (if there is one), but if that one is a pass, I'll stick with some of the other, better-sounding series from CLBC.

Dropped my rating just a bit as the bright flavor of this well made IPA faded rapidly after canning. The taste 1-2 weeks in and then 3-4 out from canning was appreciatively faded, with less vivid hop notes. That may be a fact of life in the DDH NEIPA universe but the exceptionally quick fade on this - not something I'd say is characteristic of the many Captain Lawrence IPAs I've had - is a fair knock in my opinion. Still a quality beer to be sure .