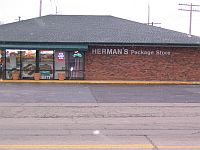 View: Place Reviews
Reviews: 4 | Ratings: 7 | Log in to view all ratings and sort
Reviews by ackeeper:

This place has really stepped up their game over the last 12-16 months. The beer shelves are stacked, the selection much larger, and the layout much more organized. Prices are $1-3 less than further north and there are a lot of fresh seasonals on the shelf; Goose Lolita ($17.49), Goose Halia ($19.99, Sculpin ($13.99), Winter Yulesmith ($8.39), along with some older stock. Herman's is the best shop along I-80 between Joliet (Liquor Depot) and LaSalle (Rudy's).

Herman's is just what I consider a neighborhood liquor store. A little dingy when you walk in and most everyone you see is either buying BMC by the case, Lotto tickets, or cigarettes. They do have a nice aisle of craft and import brews. Some things are older and pretty dusty which keeps me from buying things best consumed fresh when I stop in. I guess the clientele just isn't into the micros and imports too much.

Service is average for the simple fact I've never asked about anything in particular. When paying at the register the owner always has a comment on what beer you purchased which at least shows he likes his higher quality brew.

The selection varies quite a bit each time I stop by. Every now and then you'll find some hidden gems and a couple weeks later have a hard time finding something to buy. Full line of Sam Smith bottles along with a decent section of English brews. 4-packs of Delerium Tremens adorn the Belgian section with Rochefort, Atomium, and Unibroue is in there as well with a couple offerings. The micros are constantly changing. Again, I wouldn't recommend purchasing anything that's best drunk fresh because you never know how long things have been there.

Overall, if your in the area Herman's is worth a stop. Every now and then you can pick up some goodies for excellent prices. There's a pretty good selection of liquors as well, rum, tequila, whiskey, and scotch.

2017:
Herman's has greatly expanded their beer selection, with a whole aisle plus of assorted craft and imports. There was a local section that had some regional Illinois breweries that don't distribute yet in Chicago like Radium City, Triptych, and Generations. Everything I looked at seemed to be in code. Good presence of craft beer in the coolers too. Import highlights included Rochefort, Weihenstephaner, and more.

The staff was really friendly and offered help while browsing. Great store if you're local or stopping through on I-80.

2007:
Herman's is a pretty utilitarian stop for a beer run.
A good selection, I was surprised to see 4-packs of Delirium, Atomium, and the Unibroue line. There was even an ancient 6-pack of Raftman on the top shelf, under a thick layer of dust. Rochefort 8 was there looking lonely without any 6 or 10 to hang out with.

No one helped me out, they were doing steady lotto ticket business on a friday afternoon. Cashier was quick and friendly ringing up my Badger Porter.

No more Bells obviously, did see a lone sixer of Third Coast beer though. 3 solid Sprecher choices, Black Bavarian, IPA, and Hefe. Triple Bock was here, much to my chagrin. Barley Island was there in 6-packs, although I wasn't familiar with them at the time. A few good German (Weihenstephaner, Paulaner) & English (Sam Smith) Imports, some Euros as well. There were beer sections on either side of the far aisle, not many craft singles in the cooler though. Place was a typical, lovably dingy package store. Nothing more, nothing less.

If you Mapquest it will take you in the back of the store on Walnut street, but the big sign that looks like Saturn is in the front. When you walk in turn to your left and walk past the counter to get to the beer section.

They have two isles of craft beer with some 1/2 an isle of craft soda pop on the other side. Passed the warm beer is a few doors of cold 6-ers and some 40's then it gets into the stacks of BMCs.

I was impressed by the stuff they had that I hadn't seen before. A Belgian beer that uses 6 grains, and a few nice German and English beers. On the other side they had some new releases like Oberon and Tommy Knocker along with some Heineken mini-kegs and some bottles that had little zippered coats on.

I found some Samuel Adams Triple Bock but I couldn't find a date on them and they had a few other beers that I have not seen for several seasons. When I went to check out the guy was had a small-town friendliness to him with the usual conversation about this and that. I will definitely stop here if when I head to camping in the area.

Herman's is located in downtown Ottawa and is by far the best liquor store I've found around me. Upon entering there's the standard liquor store vibe with flourescent lighting and a large section of both liquor and wine. If you go straight ahead towards the back of the store you'll stumble upon the beer section.

There are two shelves that are dedicated to craft brews as well as imports. They have lots of Bell's, Three Floyds, Rogue, O'Fallon, Berghoff, Rockies and more. The import selection is heavily German with a smattering of Belgian and others. There's some Unibroue as well as the full line of Samuel Smith's. All of the craft sixers I've bought here have been fresh and they seem to do a good job of rotating stuff and getting new stuff in. This isn't a store where you're gonna find that rare beer, most dedicated BA's have probably tried most of these already, but in an area that's a wasteland for good brew, I consider this place an oasis.

Everyone has always been really friendly here and willing to help if I had questions. If I'm looking to pick up some good brews and I don't want to go out to the suburbs...this is where I'll be stopping. So, if you ever travel out to Starved Rock for the weekend, stop by here and pick up some Expedition Stout for the trip!

Herman's Package Store in Ottawa, IL
Place rating: 3.93 out of 5 with 7 ratings