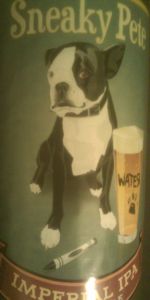 From the CAN: "Ale Brewed with Honey"; "WATER [in Pete's handwriting, along with his pawprint, on a pint glass clearly filled with beer!]"; "Sneaky Pete is a blend of five different hop varieties and had copious aromas of white grapefruit and citrus. The middle is complex and rich; a real beauty. Finished with wild clover honey."

What izzit with me & honey beers lately?!? I am not CANplaining, mind you, just remarking on an unexpected phenomenon.

I Crack!ed open the vent & Sneaky Pete leapt up to grace my fingertips with his tongue. He was SO glad to see me! I beCAN an extremely slow, gentle C-Line Glug since it had been a while since he was initially CANned. He still raised up to form two-plus fingers of dense, foamy, rocky, tawny head with very good retention, leaving a load of lacing as it fell. Color was Deep-Amber/Light-Copper to Copper (SRM = > 13, < 17) with NE-quality clarity. Nose still held the aforementioned grapefruit, but the honey was beCANming assertive, as I kind of expected. Pete rubbed his nose against mine while I was taking that sniff! Mouthfeel was big, full & thick, like a dollop had been scooped into my mouth & onto my tongue. The taste was quite good, perhaps not as bitter as it may have been in its youth, but still with a definite grapefruit-citrusiness & a woodiness, like fresh white oak. I have perceived this in other aged DIPAs/IIPAs & I do not know what causes it, but it is very pleasant.

It reminds me of being in the coopering shed. I had a student who wanted to get into carpentry after high school, but with no defined plans. I suggested coopering since it was making a resurgence. He looked into it, decided that he liked the precision work aspect of it, went to trade school & the last I heard, he was in Kentucky with one of the big distillers. 8=O He took me on a tour of his shop during trade school & the smell of the raw wood was amazing! Oak, cedar, pine. Mmm.

Pete barked at me, breaking me out of my reverie. He was pointing, with his paw, at the CAN's label. 10% ABV!?! I had NO idea. He was warning me to slow down, since this was such an easy-drinking beer. I CANplied, but only in deference to him. I was supposed to be out running errands, but inclement, liquid weather put the kibosh to that. 8=( Finish was pleasantly dry, not gasping, which I dislike. It was a very mellow beer at this stage in the game. Did the extra time in the CAN give the yeast more opportunities with the honey? Quite possibly. Man, this was super-smooooth. YMMV.

Reviewed by AZBeerDude72 from Arizona

3.7/5  rDev -1.3%
look: 4.25 | smell: 3.5 | taste: 3.75 | feel: 3.5 | overall: 3.75
Nice copper orange color with a thick off-white head with great retention.
Aroma with notes of pine-naphthalin, condiments, caramels, flowers and grapefruit citrusy.
Flavor with notes of grapefruit, pine-naphthalene, lots of spices, orange marmalade, resin, garlic, ginger, caramel syrup, berries and white fruits. Dry aftertaste with a long bitterness. Potent 89 IBUs.
Full body with appropriate carbonation. Alcohol of 10% is well disguised, although it has a warm feeling.
Quite bitter DIPA with lots of condiments and piney-grapefruit forward hops. Good complexity, though I didn’t like the sort of dank pine-chemical profile. I found this more of an American Barley Wine given its solid malty caramel backbone.

3/5  rDev -20%
look: 3 | smell: 3 | taste: 3 | feel: 3 | overall: 3
This was poured into a tulip. The appearance was a hazy burnt orange color with a slim finger’s worth of white foaminess that quickly dissipated leaving some stringy lacing roaming here and there. The smell had a decent sweet grapefruit with a slight grassiness and a decent caramel malt backbone. The taste copied the smell and brought in a slight extra citrus to give off a slight bittersweet appeal. A bitter citrus aftertaste leads to a quick dry caramel/citrus finish. On the palate, this one sat about a medium on the body with a more sipping quality about it. The carbonation seemed fairly rounded out, slightly smooth and didn’t have the expected punch that I wanted in a DIPA. Overall, at 10% and lack of harshness, I’m wondering if this was old. I didn’t see any date on the bottle, probably only have again if I knew it was fresh.
Jun 27, 2017
Rated: 4.23 by Akyeras from Connecticut

T: Orange peel, grapefruit, a touch of pine, with a caramel and honey finish. Decently bitter with a definite booze finish.

O: Overall a pretty tasty brew. Not the greatest of the style, but a very passable IIPA

Appearance: Right off the bat I notice a ton of carbonation. Be careful when pouring this thing. The head is massive and has a creamy texture with an eggshell white color. The body is very murky. I can't see anything through it. The body of the beer is a deep orange brown color.

Aroma: It has a big malty nose with a fairly strong pine resin aroma. It smells a lot like a Barleywine.

Taste: The flavor mimics the aroma. It has a lot of malt flavor that is mixed with this strong pine flavor.

Mouthfeel: It is a very smooth and thick beer. It has a fairly heavy and dextrinous mouthfeel. The finish is extremely slick.

Overall: It drinks like an under-attenuated Barleywine but it has a very characteristic "East Coast" flavor. The flavors are good but the texture of the beer is way off. It is just too thick and syrupy. It is still drinkable and I can sit here and finish the beer but it just isn't a solid enough beer as a whole for me to want to drink it again. I don't really recommend it either.

Rated by Workingquad from New Jersey