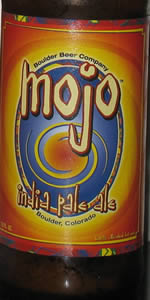 Pours a clear burnt orange color with moderate head and persistent lacing.
Smell is a mix of sweet malt and tropical fruit.
Taste is grapefruit and pine. Moderately bitter.

A: a light amber with a thin head on top.

M: hop bitterness hits the tongue first then gets balanced out, it @ lingers a long time with sugary malt on tongue. the lupulin is up in my sinuses but I dig it.

My Mojo has been pretty good for a long time (not to brag), but for some reason I don't buy this often. I know I tried it a long while back, but I don't know why I haven't been back. Mojo has good mojo.

I looks like a good AIPA, yellow, with some head and lacing. The aroma is pungent and actually has something besides hops in there.

The taste is very well balanced for the style. Hoppy, yet a little dark and malty. It has the depth that some of the lighter AIPAs are missing.

The aftertaste is crisp and hoppy. None of it is too bitter. I think I should do more mojo more often.

The beer pours a golden color with a thick frothy white head that slowly fades to lacing. The aroma is good. It has a nice malty scent that boasts of pale and light crystal malts. It also has a wonderful hop aroma. It's dry and bitter with floral notes. The taste is awesome. It has a very bitter, floral hop flavor that goes down easy and finishes dry with a slight malt feel. This is quite enjoyable. The mouthfeel is good. It is a medium bodied beer with adequate carbonation. This is a damn fine IPA. It has a good malt flavor along with outstanding hop character; a good drinker.

A - very deep gold, just a hint of orange. Head is pretty much white and decent sized. Lots of sticky lace down the side.

S - fresh grapefruit rind is the dominant aroma, not much else. Not a huge nose, but I'm not sure of the age either.

T - taste is a good mix of sweet and bitter grapefruit hops, but also a lot of floral hop too. Malt is there for effect only, just a whisp of sweetness before a big, longlasting finish of bitter hoppiness.

M - low carbonation, smooth, med body. Finish is dry and resinous, very good. Alcohol is there, but smooth, and helps with the drying effect.

Straight up IPA, simple and basic. Dry, crisp, low sweetness, lots of bitterness. Just the way I like them. It's not the best I've ever had, but it sure is solid. Nice blend of Amarillo and Centennial hops; you don't get any strong piney notes, but the complex floral and citrus character is quite enjoyable.

S - Stinging hop spice with citrus, light earthy, pine and lemon leap out of the head.

This beer is sooo much better fresh at the brewery, or on tap, than out of the bottle. I purchased a case of bottles earlier in 2009, thought it was a nice, lightish IPA for summer, and wrote it off as a mediocre, summertime IPA before trying it fresh from the brewery. It was amazingly better and much more geared towards hop-heads than the bottles I had. I found this to be far-and-away the best brew at Boulder that was available when I stopped in, for me. I do love the hoppiest of the hoppy though. I can never drink a bottle of this again now that I know how good it is fresh on tap. Almost wished I skipped the other beers at the tasting because this just blew them all away, and I wanted to savor this one brew longer and take advantage of one of the few times I'll be in the area.

This beer pours out as a yellowish color with some hazy to it. The head was white and pretty fluffy looking at first. The lacing was decent. The smell had a little bit of pine and cirtus. The taste was good in the beginning but by the end it seemed like the hop flavors died off by mid glass. The mouthfeel was average. Overall this beer isn't terrible but I think it just loses something half way through.

This pours slightly hazy rich amber, with a fluffy head that does not stick around very long - a small foamy ring and slight foam film remains. The ring laces a bit but goes away and does not regenerate, so the foam is completely gone from the top by the end of the glass.

I can't quite describe the smell. Floral and hoppy, somewhat ascedic. Though I cannot place what is going on here, it actually does smell fairly good.

taste is really good, slightly sweet, a mild hint of pine hops, some dryness in some other kind of hops, notes of banana and mild spices. It balances well, with a hint of alcohol overtone, maybe slightly burbon like.

It has a creamy mouthfeel that goes dry in the back of the throat and turns oily as it dissappears.

To me, this is a strange swing for an IPA. Not sure what I would classify it as, though. If you sort of like IPAs, but are looking for something with a little less bite than usual, search high and low for this and give it a try! If you are a staunch IPA lover, give this a try anyway - it will be an interesting sample. Overall, I do recommend trying this if you can find it.

This beer pours a pale orange with a hazy body. There is a nice pillowy off white head that lasts for the entire pint. Decent lacing left on the sides of the glass. The nose is a strong but sweet hoppy aroma. Citrus hops have the most representation - grapefruit, a touch of orange and some lemon are detectable. Taste is a bitter hop flavor is decent but there is something that detracts from the hop goodness. It's a sweet flavoring that's almost like sugar was dropped in the beer and not well balanced. Mouthfeel is medium to lighter bodied, nice carbonation.

This is probably the best $ value IPA on the market. It has the the hops content and lingering mouth feel we all want, but is not overpowering on the palate or the wallet.
appearance --&gt; love that lacing!
smell --&gt; makes me want to drink it fast
taste --&gt; makes me want to drink it slow, and enjoy it
mouthfeel --&gt; like beer should be... absolute pleasure
overall --&gt; When I can find it, this IPA is in my fridge. There seems to be a supply issue.

A clean orange\amber colered beer with asmall off white head theat leaves a little lace. A very sharp hop aroma with a hint of grapfruit. The taste is at once sweet grapfruit and a strong hop prescence. The two do battle for your taste buds. With no clear winner until after you have swallowed. That is when the hops bitterness hangs on to the back of your tongue.

12oz bottle poured into a Sam Adams pint glass. Pours a golden orange color with a nice white head. The aroma is filled with wonder piney hops annd malt. The taste much like the smell is highlighted by the hops but there is a nice malt backbone as well. Overall, this is a really solid IPA all around and I would quaff a few of these with joy anytime. Recommended.

Poured from a 12oz. bottle into a pint glass. Mostly clear with a slight haze, and a gorgeous ivory 2-finger head. Minimal lacing.

Smell is very aromatic: flowers, pine tar, a touch of leather and a backdrop of bread.

Taste is smooth and clean. Nice hop notes add a touch of pine nuts, and an underlying red currant flavor in the mouth. The aftertaste is a touch metallic, but nothing that detracts too much from the experience.

Mouthfeel is round with a yeast feel and fairly clean finish.

Drinkability is fairly high. I could pop a couple of these in a session, though there are better IPAs out there, this is a great example of one done right, if not exquisitely.

Poured from a 12 ounce bottle into a BrewDog cervoise glass. Best before 18 August 2011.

A: Three fingers of head; good retention. The beer is cloudy, but translucent. Quite pale yellow. Nice lacing.

T: Not bad, but not nearly as hoppy as I'd hoped from the nose. It's a bit bland and/or watery. The maintaste is brief, but full of sweet oranges. Then spice kicks in on the endtaste for a hoppy-vegetal aftertaste, but not particularly bitter (which I was in the mood for, pity).

M: Again, a bit thin-smooth. There are a lot of bubbles, so where's the carbonation? Eh, maybe I'm being too harsh. Some carbonation, a bit chewy.

O: Decent IPA, but nothing I'd have again. I wouldn't disrecommend it, but...eh. Commendable, I suppose. By the end of it, I'm ready for it to be done.

Pours orange / copper / golden color with lingering white head. Had this a bunch of times. Aroma of hops characterized predominantly by citrus notes, with a pound cake malt aspect noticeable as well. Flavor reflects the aroma, dominated by citrus like hops, although it is somewhat balanced for an IPA this bitter with cakey malt undertones. Leaving a lasting bitterness on the finish. Can’t argue with this one, a great rendition of the india pale ale. Full bodied, yet smooth mouth feel, slightly creamy. Nice.