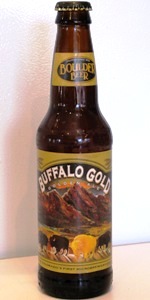 Since 1989, Buffalo Gold Beer has been a beer tasting like beer meant to fuel beer-soaked celebrations. Bring the noise.

I believe this is now called SKO Buffalo Gold, not the best but I found it still easily drinkable.

12oz can poured into 10oz goblet. Poured a very cloudy dark yellow color, with 1/2 inch of white head that had low retention, but good lacing.

The aroma was mostly sticky sweet, with a slight funk. I've noticed that same thing in other beers from this brewery, maybe the house yeast?

Very similar on the tongue; lots of sweetness, no grain or hops, and more of that dang funk, yo!

The body was decent, if perhaps a bit fuller than I prefer in the style.

Drinkability was a bit on the difficult side, mostly because of that funky aspect. Overall, a very meh beer. Cannot recommend.

L: Pours a copper gold color with a creamy white head and no lacing on the glass.

S: Some nutty malt, with a floral hop and a strong mineral note.

O: Definitely feels like it is catering to the light lager crowd, not a very interesting beer.

12 oz can. Pours clear orange gold with a medium creamy white head that retains well and laces the glass some.

The aroma is sweet vegetal malts with a little honey.

The flavor is sweet vegetal malts with a little bitterness in the finish. The mouthfeel is medium bodied with smooth carbonation.

Pours a light clear amber with a large white head. Smells slightly crisp and crackery. A bit of citrusy hops. Not a lot to the aroma. Taste is similar. Crackery and bready, with a hint of yeast and a crisp finish. I could almost mistake this for a pilsner. Not a bad beer, and certainly refreshing, but lacks complexity.

Appearance – The beer is served a deep golden color with a tiny head of white foam. The head fades super fast leaving just a trace of lace on the sides of the glass.

Smell – The aroma of the brew is big of a bready aroma with a good showing of a caramel. Along with these smells comes some fruitiness of harvest fruits and a little bit of a hay smell.

Taste- The taste begins with a rather thick bready taste mixed with a little bit of doughiness. Some fruitiness of harvest fruits (peach apricot and pear) develop more as the taste advances. Other flavors of a light herbal hop nature as well as tastes of caramel and a rather off musty tastes later come on. In the end, one is left with a odd, and slightly disagreeing malty and sort of sweet, but strangely hopped and musty taste to linger on the tongue.

Mouthfeel – The body of the brew is slightly thicker with a carbonation level that is rather low. For the bready and sweet tastes of the brew it was OK, but a higher carbonation would have helped hide the must and made for a more refreshing brew. So overall it was just OK.

Overall – Not really one I would necessarily recommend. It has an odd aftertaste and the flavors don’t really meld all that well together. Not one I will go back to any time soon.

A big thanks to the founding father of the canquest, woodychandler, for this beer. Poured from a 12 oz. can. Has a golden color with a 1/2 inch head. Smell is of bready malts. Taste is also bready malts, very light hops, smooth and easy drinking. Feels medium bodied in the mouth and overall a solid but unspectacular beer.

The smell is of light grain.

The taste is of grain with a honey-like sweetness. A light touch of toast and a suble floral touch balance the sweetness in the finish.

It is light-bodied and easy enough to drink.

A pleasant enough basic blonde ale. Nothing particularly special about it, in my opinion, but inoffensive.