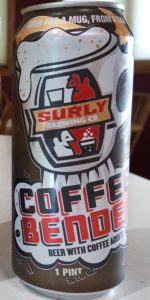 Out of a can into my tulip. Trade from my man Kevinpitts.

A – Root beer colored pour with about a half inch of light tan head that settled quickly.
S – Roasted malts, coffee, chocolate, vanilla. Very nice aroma.
T – Strong coffee punch to start with a touch of bitterness to follow. Malts mix in with a bit of sweet and roastiness. Flavorful chocolate and vanilla finishes it off. Nice brown all around.
M – Medium carbonation but it feels lively. Bit creamy. Touch thin.
O – I waited awhile to try this one and I am thankful I got a chance. I love coffee and brown ales so this is right up my alley. I would love this flavor combo in a stout. One can hope. Thanks again to Kevin!

Excited to see this one at Four Firkins when I was in Minnesota -- $4.39 for a can though? Was that priced right? Pretty damn expensive! I enjoyed the regular Bender though, and I like coffee, so my hopes are kinda high for this one. Canned 7/11/14 and poured 9/4/14.

Appearance: Semi-aggressive pour gave off a modest head that went down to about a ring and stayed. The color is mostly clear and ruby black. Looks pretty nice in the glass. (3.75/5)

Smell: Just upon cracking open the can, I got a huge waft of coffee that almost buckled my knees. Phew, this stuff smells great! Really doesn't share any characteristics of the regular Bender, at least on the surface, because the coffee note is really strong. This smells like coffee with some cream or sugar added, because it has a definite sweetness in there. Awesome nose on this beer though, but stay away if you don't like coffee and/or coffee beers, because the coffee in this is FAR from subtle. (4.5/5)

Taste/feel: So much coffee. This has a rich black coffee flavor, but the malt in Coffee Bender keeps it from tasting identical to cold black coffee -- coffee, coffee, coffee, a malt roastiness character, a slight bit of char, and then lingering coffee. There's not a lot of depth of flavor. In fact, regular Bender probably has more depth of flavor, but I just like this beer more. The feel is about full bodied with a modest carbonation to let you know you're drinking beer, and not coffee. (4.5/5, 4.25/5)

This brew just smells like freshly brewed coffee, and tastes almost the exact same way. Probably the most coffee-forward beer I've had, and one of the best beers I've had as well. This is an absolutely phenomenal beer that needs to be purchased if you see it, even at the price I got it for. Lucious, fabulous amounts of coffee... damn, I just wish I could get this in Michigan. Wow, wow, and wow.

T – Again, a lot of cold-pressed or iced coffee. Bitterness is strong but not overwhelming. Burnt flavors are actually minimal. Instead it’s very roasty, with touches of chicory.

O – I want to like this a lot more than I do, but the cold pressed coffee is a little too upfront and pushes the beer out of balance. That characteristic could certainly be appealing for some drinkers. Would love to taste this base brown ale with no or more balanced coffee addition.

Poured from 16oz can into a mug. I served this well chilled. A nice dark brown brew, with a thin khaki head. Decent retention and some lacing. The aroma is coffee. I would like to expand on that a bit, but it's mostly coffee. Quite pleasant really... The flavor provides quite a bit of fresh ground coffee bitterness as well. This is medium bodied and easy drinking. Has a nice finish and aftertaste. If you're looking for a brown ale infused with coffee goodness, look no further.

Big thanks to GoGriz for this can!

Finally, I get to try one of Surly's regular brews. This one pours a lovely ruby brown topped by a finger or so of light ecru foam. The nose is dominated by a light coffee breeze, while some chocolate, toffee, and maple syrup form a sturdy foundation beneath. The taste is very similar, though the coffee doesn't assert itself as much until the finish. Instead, it shares the spotlight with cocoa and maple syrup, the latter two spiraling into the wings to allow for the coffee's final aria. The body is a staunch medium, with a light moderate carbonation and a somewhat fizzily smooth feel. Overall, a very nice beer. I can now understand how this thing has such a strong reputation 'round these parts.

Been trying alot of beers but have yet to rate one...so here it goes
Got in trade with tytoanderso big thanks!

poured very dark brown with minimal head. Strong smell of coffee!!! Taste is wonderful, strong coffee taste with roasted malts. Perfect carbonation is very light from look expected a little more thickness to it. I could sit down and drink a couple of these, very smooth!

Aroma: Grainy dark chocolate and coffee aroma are certainly in the forefront with caramel notes in the background. There is a defined "grit" in the nose that I would guess is coming from the coffee.

Appearance: Though the name suggests coffee, this beer exhibits an appearance closer to dark brown, rather than coffee black. There is a small amount of deep ruby light getting through the edges. As you pour, the head forms about 1 finger of almond brown foam. The head falls fairly quickly however, to just a ring around the outside of the glass.

Flavor: A bite of cold press coffee hits you at the first sip. It is pronounced but not bitter. There is surprisingly a fair amount of sweet chocolate following this up. The flavor moves to light roasted barley in the middle with hop bitterness coming into play with an earthy presence. Toward the finish the coffee tones come back at you with a bitter flavor. The finish is dry with lingering coffee and hop bitterness.

Mouthfeel: Light to medium body with light carbonation. Not cloying or astringent but the bitterness in the finish will have a slight puckering effect. Though this is light.

Overall: An excellent example of coffee flavors and aroma adding to the complexity of the beer. The bitterness coming off the coffee marries well with the hop and roasted barley qualities in this beer. I feel like I'm saying it all the time lately but the mouthfeel is a little thin, it moves toward watery in the end but I suppose this leads to a crisp and clean finish.

A: This beer has a menacingly deep dark countenance with a huge banana republic khaki head, a bit refined for its Midwest heritage which would be acceptable if it didn’t smell like alpha acids an- on to the next section.

S: I couldn’t hold this over, the coffee is overwhelming. The Midwest loves to make beers that just infiltrate the nose, take over your house, wake your girlfriend up: OLFACTORY. That is their game and it is played well. I supposed there is some mild Hershey’s cocoa and bittering elements but overridingly, it is coffee, like elephants, all the way down. All of this is predicated on coffee as its existence.

T: Wait for the spoiler alert: coffee. Seriously. Just coffee for days. Were it not socially reprehensible to just straight up drink brown ale for breakfast, this could replace mocha frappa adjective misusacinnos. Maybe in the Midwest that’s just how they roll, wake up, drink some surly, work, more surly, check redfin.com, attempt to solve property value disparity, call it a day. But just wow, not just coffee, amazing coffee. I don’t want to say barefoot intelligensia level, its not that acidic but it has a definite Coffee Bean feel to it. For my east coast readers, Coffee Bean is the exceptional coffee that we drink while you keep Dunkin Corp. stocks abreast. It tastes like coffee.

M: It is incredibly thin. . .not unlike. . .coffee. If you think I am trying to drive home some form of Nabokovian motif, let’s just put it out there, it is coffee, not sex with minors. Seriously it tastes like an iced coffee. I got this as an extra and I demand to know the price of this temptress. If it is under $3 per can, I have pity on the poor Midwest that unleashed this wraith upon their productivity. Even the siren of Farmville nods at this Amarosa knowingly.

D: If you haven’t gathered from the foregoing: very. I have essentially provided a voucher for drinking this unabashedly for breakfast. I don’t care if you are a crane operator on the new children’s hospital which happens to be occupied early, go ahead, have some coffee bender in the morning, you earned it big guy (or woman, whatever, find me a woman who operates a crane [sic.])

Narrative: “I just don’t understand why the early Seinfeld episodes look\ so dated, look at what they are wearing-” Uncle Adam droned on. “Keep it together Jonah, keep it together” he told himself as he clicked the rhythms from Vengaboys songs along his jaw line. He didn’t exactly mean to supplement all of his caffeine habits with coffee alcohol but, such is the way of things. “Jonah are you cold? You’re positively shaking!” Aunt Beatrice exclaimed grabbing an afghan rug. “Yeahbut you know who really- I mean always touching the thermostat? Who says that? Seinfeld, you know what I meanyeahyeah, notevencoldthough seriously.” He attempted to break his repartee into at least dactylic hexameter for his relatives to try and understand. Jonah was a man converted to the alcoholic coffee beast, and now he was dropped as though he should have invented the rain coat.