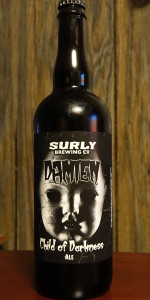 Notes: From the blackest depths of the brewhouse comes Damien, Child of Darkness. Spawned from the usually discarded remnants of Darkness, Damien is a dry-hopped black ale with flavors of roasted malt and dark brown sugar. Tangerine and pine aromatics only add to its insidious appeal.
View: Beers
Reviews: 75 | Ratings: 431 | Log in to view all ratings and sort
Reviews by brewnic:

A- Pours a black color with a 1.5 finger tan head. Once the cap recedes and I empty the pint, a bit of sparse lacing is present.

T- Starts with a bit of bitter chocolate, nut brittle backed with ample pine and grassy hops. The finish is slightly dry and a bit nutty.

M- Spot on carbonation and body.

D- Pretty darn drinkable. I'd definitely have this again.

22 oz. bottle split with my wife, who used a random number generator to pluck a bomber out of the fridge. Not what I would have picked tonight, but hey. Dated 9/30/16.

Pour is dark brown with a long-last Tempur-Pedic head (though I’m sure a lot softer than those torture devices in the guise of mattresses). Smells like an old nut brown with a sideboob of piney hops & roast. Interesting.

Damien - proving not every black IPA sucks (they should put that on the label). The roast & the pine cone hops are in nice harmony; xtreme roast is what dooms most of these halflings. Mild sweetness. Citrus & bitterness take the hand of the pine & lead it all the way to the end as the non-hops vanish from the scene. Disconcertingly creamy, & it takes concentration to drink this.

What’s really a Frankenstein, made-up-ass category that should have been smothered in the crib has had a few tolerable outliers, & this is one of them: Surly has found a balance that works. Good beer.

Pitch black with a large, fluffy caramel-tan foamy head that settles to a thin blanket.

Taste is actually less distinct and forgettable--there is so little flavor, to be honest, it almost doesn't seem like beer. How the aroma is so much more substantial than the flavor is beyond me. There is a little caramel, salted toffee, smokey wood, and a slight tart or floral note. Overall, it's all very light, and like a bitter cola, but really not as bitter or hoppy as I was expecting. There's some light milk chocolate, with a pineyness that is just barely there, along with a little wheat bread. I'm really reaching here, trying very hard to discern flavors, but there really isn't even all this much going on.

Feel is thin and watery, slightly crisp, with a faintly dry finish. I'm really surprised how watery this is when the look lets absolutely no light through, even with a bright LED flashlight pressed right up against the glass.

On tap at the Triple Rock Social Club in Minneapolis. Served in a standard pint glass.

Appearance: Dark and black with a little bit of brownish ruby red on the edges. Decent three finger light tan head that slowly fades into a patchy layer. Moderate amount of lacing.

Smell: Strong citrus hop aroma up front. Grapefruit, orange, and pineapple. Also some hints of herbal pine resin. Solid presence of dark roasted caramel malts. The toasted malts are noticeable but the citrus stands out the most.

Taste: A lot like the smell, big taste of citrus hops with notes of grapefruit, orange, and pineapple. Hints of pine resin. Bitterness from the hops is fairly mild. Dark roasted caramel malts give some balance in the background with hints of coffee, chocolate, and bready biscuit that lingers in the aftertaste.

Mouthfeel: Body is on the lighter side of medium and carbonation is moderate. Feels somewhat prickly and kind of light for such a heavily hopped beer. Finishes dry.

Sometimes a black ale is a black ale. And not a Black Ale, or American Black Ale.
And grassy hops in abundance smell so fine!
There's this thing called a small beer that no one's ever heard of, and gee whiz, it's been done to Darkness.

A re-fermenting of the run-off malt and mash of Surly's Imperial Stout, Darkness, this one rings in at half the alcohol percentage, 5 %, but I don't know whether more hops and malt are added, or if more yeast is pitched and fermentation begins again with this old, spent mash. I suspect the latter.

Taste: some gritty dark malt, some chocolate, black malt, giving the coffee flavors, the cocoa, with plenty of bitterness and hardly any sweet. Great texture, excellent play on the palate, plenty of room for calling it a hoppy porter, or black IPA, but yet it is not one. It is a reduced version of Surly Darkness, that still has plenty of potency and charm. Plenty of grassy hops still working on the tongue, pleasing the palate, and the aroma never quits, the grassy/piney hop combo mixing well with the cocoa and coffee malt character.

It's not as rich and full bodied as you might expect if you don't fully understand what they're doing. So stop expecting what doesn't exist and enjoy what does. It's not full-on ale, it's a baby imperial stout, but it still has that glimmer of madness, that gleam of it's father's eyes.

This is my kind of session ale, and one that I'd prefer above Surly Mild, or anything else with a leaner body, but wouldn't really reach for one instead of a porter, or a Bender. Good work, gentlemen, and a great idea, I'd love to see more of this tried now and then. Beer recycling, it's the way to go!

Had this one on tap at Darkness day 11.

T-The fresh hops really shine in this beer. This beer has a significant malt backbone but the hops are up to the challenge and gives a very satisfying taste.

D-Very good, could drink the hell out of this beer.

O-Excellent beer, would love to get some more of this. Great balance of an overload of hops and malts. My favorite beer on DD.

on tap in a surly pint glass

Pours a half finger of creamy tan head. Thick head. Color is a dark brown with a caramel hue on the edges.

Aroma: Very hoppy. Chocolate and caramel. Floral, piney, and grapefruit notes. A lot of flavor for a small beer.

Taste: Very floral. Pine with grapefruit. A lot of hops here. A light roast with caramel and chocolate. A little bit of orange. Very citrusy.

Mouthfeel: Bitter, but creamy and smooth. Medium bodied with a good amount of carbonation. Ends a little sticky, but good.

Overall, this is a fantastic small beer. Super hoppy. Reminds me of an ipa. Still, it has a nice malt profile to it. Perfect blend. I could drink a lot of this.

Pours a rich and deep dark brown color with a finger of beige head. The nose has moderate notes of roasted malt with a slight tinge of hoppiness. The flavor definitely leans toward the malty side but the hops bitterness comes on pretty solidly on the finish. Subtle smokey notes also waft in occasionally.

The body is hearty considering the lower abv.

It has been a long time since I had a top shelf black ale - this certainly fits the bill.

Coffee, roasted malt, a little wood in the nose.

I'm not really sure what's going on here, but the actual taste is really bland. Like an old, cold, cup of coffee. I let it warm up hoping something else made an appearance but no. Basically like Guiness, but with less flavor.

Mouthfeel thin and near flat. I think this is part of what sinks this. My tapwater is chewier than this.

I've never had Darkness, but if it's anything like this I no longer need to.