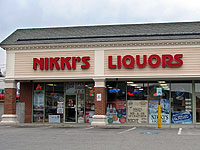 Reviewed by tasterschoice62 from Rhode Island

3.7/5  rDev -19.4%
vibe: 4 | quality: 3.5 | service: 3.5 | selection: 4
Not a bad shop but be prepared to pay t least a buck more than anywhere else.
Also they use a little trickery here. Check your dates folks there are a lot of outdated bottles on the shelf . one thing they did that really annoys me is opening up old seasonal 12 packs and selling them as singles.
May 27, 2015
More User Ratings:

Reviewed by smassucci15 from Rhode Island

5/5  rDev +8.9%
vibe: 5 | quality: 5 | service: 5 | selection: 5
The best selection of craft beer at any store I've ever been to, and it isn't even close. From top notch beers from across the country/world to hard to find New England/New York brews, they have it all. They're also a super friendly crew and willing to help as needed or let you browse at your leisure.
Jun 11, 2021

Reviewed by ryanm3850 from Rhode Island

4.22/5  rDev -8.1%
vibe: 4 | quality: 4.25 | service: 4 | selection: 4.5
The new store is great - pretty easy to get to and ample parking, although on a release day it has the potential to be ugly. Inside is small, but very nicely laid out - beer buy the state for the most part, and pretty much by country for the imports. Macros are in the minority as well. Clean, well-lit and the little tasting area is a nice touch. Service is generally very good, but can be a bit "brief and to the point" which doesn't bother me in the least - they are running a business and if they don't want to chit chat I'm OK. They seem to have a bit of everything, some but not so many "hard to finds", and ample supplies of the items they are featuring. I've not had good luck with hitting shipments even though they will say when something is expected, but have been handed a bottle or two or interesting beers at the counter based on what I'm buying. I'm not sure what's up with that. I generally like the store and the folks, but do find them higher priced even compared to MA, but in MA I can't find what I can find there without driving an hour...

Update 2022 - still a great selection, but the value proposition is a bit tough. Almost invariably higher priced versus other shops. Worth the extra cost for the ample singles section and they do discount a mixed sixer (10%).

Reviewed by direwolf00 from Rhode Island

4.9/5  rDev +6.8%
vibe: 4.75 | quality: 5 | service: 4.75 | selection: 5
Nikki's Craft beer selection is excellent, a great craft beer store in Providence, RI, there are 2-3 other local stores that offer a great selection, but Nikki's is my favorite. I like the per state layout on one side, per country imports on other side of aisle.

The staff is friendly and knowledgeable, good background music playing.

Reviewed by JamesStreet from Louisiana

4.3/5  rDev -6.3%
vibe: 4 | quality: 4.5 | service: 3.75 | selection: 4.75
Went to NIkki's after reading reviews of it on here. In Providence for business and decided to seek out a good botttle shops to stock the fridge at the hotel. Had a nice two-sided shelf with imports and locals on one side and then had the other side divided by states of origing. I was able to grab some Jack's Abby, some Grapefruit Sculpin, and some Sixpoint 4Bean. Discount on mixed 6'ers as well. They even have a barrel room with some really nice vintages in the back. If ever in the Providence area, make sure to stop here for your craft needs
Aug 22, 2015
Rated: 4.43 by Sweeneydawg from Massachusetts

Reviewed by AlcheyAl from Rhode Island

3.61/5  rDev -21.4%
vibe: 2.5 | quality: 4 | service: 3 | selection: 4.25
Digging the new spot they opened about a year ago. Closer to my home so I'll stop in a little more frequently. Staple selection of craft brews that are pretty fresh ad well. Nice vintage area where I was able to snatch up a couple cool beers from once upon a time. Nice cooler area as well. A little pricier than some other stores but sometimes it worth it to find that beer you can't quite find somewhere else. Not liking the parking situation here it can get a little annoying especially during traffic times and I've hit the bottom of my car a few times leaving the lot. That being said employees are ok but sometimes I get a " I'm not into beer enough vibe" but I still continue to shop here for the beer. Worth stopping by.
May 07, 2015

Reviewed by TheElectricOne from Rhode Island

Reviewed by Nickcal from Rhode Island

3.7/5  rDev -19.4%
vibe: 3.25 | quality: 4 | service: 3.25 | selection: 4
Changing my review here after coming back many times. First off I would like to say, after trying to initiate conversation and talk to people who love craft beer, these people have no personality. I don't think Ive ever heard a laugh or smile to be cracked and Ive met all of the workers/owners. Its like they wake up everyday and are miserable to work here. Which makes me question why they got into the business in the first place. Secondly after a few limited releases that I have tried to be a part of, most were disappointing. Like for example, when I sit outside waiting for KBS and I see the driver bring in 4 cases, but when I go in and ask how much they got, they say only 1 case. Now some might say, "Why would they lie?". But I can tell you that a friend of the family blew there cover to me. I was at another liquor store and they had mentioned that they were friends with the owners of Nikki's. Well after a little bit of small talk and getting to know one another, this person mentioned to me that they are lucky to have friends that are owners because "They split limited release beers". Are you joking me? Instead of sharing them with you're customers you hog majority of it and share with your friends and family. F'd up if you ask me. Lastly, they have an aging room which I think is cool and maybe a little bit of that beer they hold back might end up there one day, like a couple year old KBS, we will see. The disappointing factor is that everything I bought from that aging room, hasn't been up to par. Not sure if its the conditions because I'm not sure how they age there beer, but I bought more than a few beers that were over a few years old and some were full blown drain pours. Just completely awful taste, the taste of extreme temperature fluctuations. I wish I had good news to say about these guys because in RI there inst much to pick from for craft beer places. Selection definitely is there best quality, unless you consider my 2nd complaint. Also they have tastings every week which is another good quality. I think the biggest problem here is the attitude/vibe. I love craft beer and I love to talk to people about craft beer. I would expect to be able to do it here, but I cant. Every time i walk in I start a conversation about beer, but by the time I leave I feel like an idiot.
Mar 23, 2015
Rated: 4.5 by WasupBeerQueen from Massachusetts

It is conveniently located off of 95. There is a parking lot to the left of the store.

The store stocks very high end whisky, wine and craft beer. I only shopped for the craft
beer- but the whiskey selection is excellent.

I was asked if I needed help- as usual I said "no thanks" and the staff let me browse
without any hassle.

The vibe is interesting. The people who shop there are beer geeks. A number of the customers were using their phones for reviews. Wireless is free- excellent, unlike most beer stores.

The selection is excellent- I was able to buy a Stone Old Guardian Extra Hoppy 2015 which just came out. A lot of the harder to find beers- for example, harder to find Clown Shoes beers. They don't seem to have a large macro selection- I don't usually look- which seemed relegated to a small area.

The bottle dates are excellent. I didn't find one bottle with an almost expired bottle date.
This shows that the staff is aware of the shelf inventory.

The store has a mix-a six policy so a customer can buy single small bottles.

I am not sure of the store's put-on-hold policy. The staff is very friendly and well- informed
about the availability of difficult to find beers. Their inventory is different than MA stores- an added plus for MA customers.

An added perc: the store gives customers bottle bags instead of boxes. I haven't seen this in any other store. Easy to carry beer out to the car, reusable for shopping and bringing beer to another location.

Rated by changdulla from Rhode Island

Rated by Chriskelley from Rhode Island

Reviewed by BrainalLeakage from Rhode Island

5/5  rDev +8.9%
I am lucky enough to say that this is not only an amazing place with an outstanding selection and great staff, but since they moved to their new location (much larger and and swanky looking than the one pictured) they are also the closest place to my house! The only drawback is that since they've moved I've been spending a bit more on beer than I used to! (due to a lack of self control, no fault of theirs) They offer a discount on mixed six packs which is really nice when you want to try new things but don't want to commit to an expensive six pack of something you may not enjoy. They also have (I think) weekly in store tastings.
Nov 06, 2014

Reviewed by DogfishTail from Rhode Island

Reviewed by gcamparone from Rhode Island

5/5  rDev +8.9%
vibe: 5 | quality: 5 | service: 5 | selection: 5
My go-to craft beer spot. Huge selection, friendly / knowledgeable staff, awesome and unique vintage room (that has some nice stuff pop up every so often - bourbon county vintages, cantillon vintages, 3F, firestone anniversary and barrel series beers, etc). Tastings all the time - it seems like every time I go in there there's a rep hosting a tasting. And to top it off, they sell homebrew supplies now. Best in RI hands down.
Oct 23, 2014

Reviewed by Mikecap from Rhode Island

Reviewed by cmatteod from Rhode Island

5/5  rDev +8.9%
Nikki's has changed locations. Their new store is truly a mecca for beer lovers. The owners are knowledgeable and passionate about beer and their collection is unmatched. If you live in Providence, this is the place to go to find a terrific selection of beer.
Oct 03, 2014

Rated by MakeMineADoubleJack from North Carolina

Reviewed by BillDon from Massachusetts

5/5  rDev +8.9%
Nikki's could make me move to providence so I would be closer. This is my favorite bottle shop and I'll be traveling across the south on 95 a lot more rather than out rt 9. The owners are knowledgable and super helpful without any attitude. They offered suggestions based on styles I was looking for and what I was buying. They even offered the 10% discount when I bought five bottles. They made sure I knew about an upcoming event based on the style of beers I purchased. The cellar room had several good bottles and the prices are reasonable markup.
Sep 15, 2014
Rated: 4.75 by Coorsy from Massachusetts