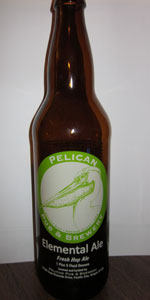 Reviewed by barleywinefiend from Washington

S: Floral, Earthy and grassy with perhaps a light smoke/spice to it

T: Definite grass, herbal like tea which also gives it a light sordove smoke element. The grassiness is balanced with a nice but light floral presence. The finish was sordove long with tea like presence, dry, Earthy

O: Sordove a strange APA in my book. Not at all what I was expecting. It's not a bad beer at all but just okay in my book by standards and taste

Reviewed by mdaschaf from Indiana

A: Pours a clear orange/copper color with a two finger, fluffy, off-white head on top. Nice retention and fluffy/sticky lacing all around the glass. Really nice looking.

S: Light citrus aromas, lots of floral and grassy hops. It is a little spicy and has some zest as well. Nice and fresh as it should be.

T: Even grassier than the aroma led on, very tasty. There is a zesty spice characteristic, definitely feel it on my tongue. There is some lemon that starts to develop as it warms.

O: A really nice fresh hop beer. Nice and hoppy for an APA, really fresh. Like this beer a good bit.

Reviewed by TheBeerCarl from Massachusetts

Taste: A very light malty sweetness with quite a bit of piney hop presence for a fresh hop ale. The hop character definitely dominates the flavor but is not so intense as to bump it up to an IPA. Some residual acidity on the back of palette as it leaves the mouth as well as some malty sweetness to balance the hops. I'd say they did a smashing job. It's definitely a Pale Ale that an IPA lover can enjoy as well as those who prefer a more mellow ale.

Mouthfeel: It has a nice amount carbonation which accents the hops acidity and leaves a clean finish.

Overall: I'd say this is a damn fine Pale Ale especially considering the volatility and inconsistentness of fresh hopped ales. Good one on ya Pelican!

Reviewed by roodie from Texas

S: pleasant tones of tea and grass (not ganja!), mellow

M: smooth and velvety, bitter tea lingers and drys out the palate

O: a nice beer, wish it was more citrusy

Reviewed by Docer from Washington

Appearance: (4.0)
- Nice light clear copper orange/amber. Fluffy quickly dissipating head, leaves lacing all about the glass, and a thin pillow above the bubbling brew. Not bad.

Smell: (4.0)
- Very grassy, and light citrus hops. Zesty, and somewhat spicy. A bit biscuity, and lightly sweet. Certainly some interesting character here, and I can't quite pinpoint what else it is i am getting in the smell. Perhaps just an earthy robust wet hop.

Taste: (4.0)
- Certainly another winning fresh hop ale. Great zesty and grassy sterling hops. Light light lemon-like zing, rather bready malt base, and just more grassy hops. Certainly not an overly sweet beer by any means. You can tell the focus is on the hops. Lovely beer.

Mouth Feel: (4.0)
- Quite the bitter beer which leaves a cloying and dry feel in the mouth. It's a bubbly well-carbed brew which is rather light to medium bodied. Certainly full flavored. Supper nice bitter touch and finish.

Overall: (4.5)
- This is another one of those fresh hop beers to put at the top of the list. Very unique, tasty, and easy to drink. Certainly sitting up there with or next to number one so far this year for fresh hop beers.

Reviewed by oregone from Oregon

3.82/5  rDev +1.6%
look: 3.5 | smell: 4 | taste: 4 | feel: 3.5 | overall: 3.5
A: Unfiltered, so a cloudy golden color. Good head that stcks around.
S: Very aggresive hop aromas. Distinct aromatics of citrus peel, pine resin and distinct mossy/forest aromas. 100% Sterling hops likely help to give clarity to the precise aromatics.
T: Plays off of the aromas. Very much a hop forward beer. Malts are not a significant part of the flavor profile but add some mid and back palate richness to the flavors. Crisp/sharp citrus and pine.
M: The first half pint is refreshing to the palate from the crisp acids and flavors along with carbonation. Becomes aggressively/progressively puckering and drying after one pint. Points for originality.
D: I want to drink more of this, but two is enough.

a: This was a cloudy, coppery golden color. It was served to me with a thin whisp of white head.

t: One dimensional for sure, but very tasty for what it is. The hops are fresh, piny/flowery, and assertive as hell.

m: Nicely carbonated with a looong lasting hop after taste.

d: It took me awhile to work through the pint, but I did finish it. One of the most obnoxiously hoppy brews I've tried. Good stuff.

Reviewed by ccrida from Oregon

Bomber poured into an Imperial pint (bottled in October, evidenced by the '10' in sharpie on the cap, homebrew style). Straw yellow (very murky with yeast on the 2nd pour) with a decent sized white had that is pretty slow to subside, leaving moderate lace. The yeast makes it look like a milk shake, and I let it sit for a good 45 mins while eating and what not and it only barely started to settle out. Still, I really like the lighter, golden color IPAs.

Taste is nice and spicy, very assertive hops, yummy but
more regular IPA then the grassy softness I associated with most fresh hops. Also fairly soapy, more so from that dreggy 2nd pour. 2 months might be a bit long in the tooth for a fresh hop, but it was refrigerated when purchased strait from the source...a firm bitter finish and a touch of alcohol (listed at 5.9%) on their web site.

Mouthfeel is chewy and thick.

Drinkability is not to high for me, this was a bit to soapy and bitter, but I wonder how much it degraded after only 2 months, as it's really not to good right now...actually, the dreges (which were too loose to really avoid) really made the second glass suck, I actually dumped most of it...I'll have to try it fresher next year. I was generous with my scores due to age.

These hops come from less then 10 miles from my house though, which is pretty sweet. Probably the exact same ones I use in most of my homebrews, albeit fresh and wet.

Reviewed by cswhitehorse from California

The aroma was fresh hop goodness and smelled of grasses and flowers. In the mouth it has quite a punch of bitterness. It was like an IPA but way smoother and popped you in the nose with some bitterness and then finished in a soft way. It was relatively chewy and enjoyable to drink. It is a money fall harvest ale.