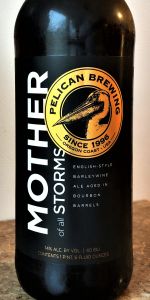 ***NOTE - Third Release - November 2010 The name was changed to 'Mother of All Storms' for trademark reasons.***

This kind of beer is why I love English Barleywines. Intense aromas of vanilla, toffee, burnt brown sugar, last but not least - bourbon. It basically has the smell of anything decadent that I can think of. Taste wise - wow. The sweetness hits you but it's not just sweet, it has that in-depth sweetness that went beyond my expectation. It's basically a decadent dessert mingled with bourbon barrels. Tasted vanilla, brown sugar, maybe molasses, bourbon and others that I just cannot describe. Very full-bodied. Each sip is robust and the aftertaste is left behind tasting like...you guess it: more vanilla and bourbon. Overall this compares to the Bourbon County Barley Wine. Both aren't that different from each other and both are outstanding. Either one - you can't go wrong.

Pours a rich and robust, deep brown with merely a nickel's width of fizzy khaki head rising to the top. This is a bottle from 2014, stored in a cellar. All things considered, it's a good look. Aroma is huge, with notes of bourbon, caramel, toffee, roasted malts, and barley. Each note hits with power, and is well executed. Flavor profile is bourbon, caramel, toffee, roasted malts with an earthy, barley finish. It's absolutely every bit of robust, and yet slips down smooth. The earthy finish is hearty, and may be a little polarizing. Mouth feel is smooth, and medium-thick. Overall, the presence in this beer is absolutely in the flavor profile. Aroma is great, with a hearty feel, but the flavor profile is deep and complex, and yet slippery smooth. The 14% ABV hides in well.

Strong bourbon, boozy aroma. Plenty of toffee, chocolate, dark fruit, and oak. Nuts and caramel grain. Coconut and vanilla. The more I sniff this brew, the more it reminds me of BCBBW, which is very high praise.

Flavor follows. It's strong and sweet, with chocolate and bourbon up front, and a massive, coconut-and-vanilla bourbon finish. All along, brown sugar, toffee, caramel, and fruit ride along the bourbon wave.

As a very rare occasion, this is the kind of brew that truly lives up to the hype. I mentioned that the aroma reminded me of BCBBW; the flavor and feel do, as well. Exceptional BA BW.

More, perhaps, than any other beer I've yet tried, this one manages to walk the fine line between being utterly undrinkable (on account, mostly, of its intense sweetness) and being utterly delicious (on account of its rich, malty flavors). A memorable offering, but if you have it in a bottle, plan on sharing that bottle one or two ways if you can.

2015 editions from bottle, at refrigerator temperature into my Delirium tremens tulip.
A - pours a dark murky brown, with an off-white head that quickly recedes into thin ring leaving alcohol legs everywhere it's been...like a gangsta mother that doesn't want to be seen or heard but leaves a trail of dead bodies in her wake.
S - doesn't let the cold temperature bother her one bit. Raisins for days, with liquid caramel, torched brown sugar, dates and prunes by the boatloads. Traces of almonds and toasted wood, which I predict will only grow stronger as the beer warms up.
T- opens sweet and....oh crap... this is one motherful load of malty goodness. Ok.. gathering my senses now.. let's see.. raisins, dried stone fruits(dates, prunes...etc), brown sugar, molasses, almonds, toffee. Getting some vanilla and coconut as well, not quite as intense as the FW ones, but it's definitely there. Warming alcohol noticed as the liquid makes its way down.
M- very full, and welcoming so. A fantastic winter warmer.
O- in the pantheons of the great BBA Barley wines, this brew stands atop.

Poured into a Game of Thrones skinny tulip glass, vintage 2015 at near room temperature. Pours a very dark mahogany with a massive 3 plus finger dark tan head, that leaves behind very little if any lace, but is still striking.

Mouthfeel is a little bigger than medium, mild carbonation, slightly dry as it should be, and at 14% ABV very drinkable.

Overall this is one of the greatest beers I have ever had. Really a treasure and I need to thank @jzeilinger for this incredible bottle.

Aroma: Its too boozy. The alcohols over power the bounty of subtle aromas. But it smells like bourbon s'mores.

Taste: Some things in this world just taste like quality. This is one of them. It is rich, it is layered, and it is complex. The beer is 14% abv, yet drinking an entire bomber seems effortless. The bourbon flavor is dense, packed between notes of rich cacao and sweet cherries. It finishes long with a fruit leather sweetness and a bourbon bite.

Mouthfeel: The mouthfeel is oaky, tannic, and sticky.

Overall: This is, or should be, the benchmark for massive bourbon barrel aged English barleywines. Its drinkable, its sweet, it bourbony, and its expensive. But the dollar per delicious sip ratio is very favorable.

A: Deep rudy-brown body. Bordeaux like on the edges when held to the light. Lively carbonation forms a fizzy, coca-cola like khaki head. Rises to about an inch before crashing rapidly. No lacing to speak of.

S: Rich bourbon, soft oak, warm caramel, sweet vanilla, roasted brown sugar, molasses and hints of raisin. There are lots of elements coming together here in harmony. Sweet, yet not cloying or desert like.

T: The sweet caramel, brown sugar and molasses dominates. Accentuated by substantial, yet not overwhelming, bourbon. The barrels imparts a nice delicate oak/vanilla character. You can tell that this beer is the product of both an excellent base beer and nice bourbon barrels with a good amount of age on them.

M: There is lively carbonation throughout the entire bomber. Imparting a hefty, yet not massive mouthfeel. Creamy. Perhaps a bit oily. Nice lingering bourbon "burn" in the finish.

Poured into a Maudite snifter. Pours a very dark russet brown with only a thin light tan head that dissipated to a ring around the glass. There appears to be active carbonation, but the bubbles don't stick around. Classic English barleywine aroma of caramel malt and dark fruit with nice bourbon and oak notes. Flavor follows with caramel malt, brown sugar, bourbon, dark dried fruit, a hint of cherry and chocolate. Finishes somewhat dry with oak and light hops. Medium bodied. Alcohol is covered but still hot and warming. A really nice English barleywine that was worth waiting for. Will lay a few bottles away for ageing, I think this will score even higher when the alcohol mellows and the flavors balance out over time.

Shared by jedwards and served in my 25cl Allagash tulip. Poured a deep brown with red highlights that were revealed from each angle and rotation of the glass. Loose, white head quickly dissipates into barely a swirl. Incredible nose - malty, sugary sweet, toffee, butterscotch, a little booze, molasses, prunes and perhaps a little breadiness. Taste follows nose - sugary sweet with the addition of some caramel, vanilla and coconut. Mouthfeel is medium with a lively carbonation. Definitely a little booziness in this, but a big, bold and delicious beer. However, closer to an American Strong than an English barleywine in my humble opinion.

2010 release, big thanks to Joe for hooking me up with this, shared with Smoked.

Poured into a snifter, this brew appears a deep dark ruby color with a hint of almost purple about it that is fairly clear and plum-like in appearance. A finger of frothy yellowish stained tan head appears and fades leaving spots atop the brew and on the glass.

The aroma is deep and fruity like plums, raisin, toffee, caramel and sweet, smooth vanilla notes. The barrel aged and bourbon presence in this brew is amazing. The vanilla aspect is amazing, it's one of my favorite characteristics of barrel aged brews. The abv tingles the nose with a fusel touch and light medicinal quality and herbal smelling hops. Overall the smell of this brew is quite candied sweet and enjoyable. The alcohol gets a bit tangy as it warms.

The taste is bold with alcohol and contrasted with herbal hops that give way to a light medicinal flavor. The bold flavors of this brew part to show a light oxidized quality, herbal hops and a drying sense of alcohol. Notes of oak and the barrel aging presence of vanilla flavoring mix with toffee and caramel sweetness. More sips yield dark fruity flavors like raisin, plum, dates and an overall candied sweetness.

This is a medium to full bodied brew with a lighter level of carbonation but not too low. This is an exceptional brew. The abv is fitting and not distracting with all the other flavors. A very solid sipper with a toasted quality that only evolves as it warms. Fantastic brew that satisfies the sweet tooth.

Pours brown with a little bit of red letting in some light. Bright beige creamy head.

Lots of toffee and vanilla in the nose. Brown sugar, perhaps a bit of fig and bourbon.

Big maltiness in the flavor. Brown sugar and toffee mixed with a lot of vanilla. Bourbon has died down a lot. Still present and heats up at the end, but this is a malt bomb.

Full bodied and sticky. Low, but present carbonation. Pretty spot on for the style.

Probably waited a bit too long on this one. Still pretty good, but I'd prefer more heat and less sweetness. Will be drinking any future ones closer to fresh.