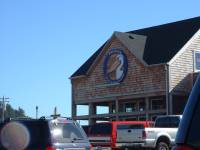 Notes: Sunday - Thursday
8am until 10pm

Friday & Saturday
8am until 11pm

3.89/5  rDev -5.6%
vibe: 4.5 | quality: 3.75 | service: 4 | selection: 3.75 | food: 3.75
Perfect day at one of the most spectacular locations on the Oregon Coast! After a morning of exploring Cape Kiwanda it was time for a beer so I left the wife and kids to play in the surf and headed for Pelican. The place had a big waiting list with all the tourists enjoying the weather but there was room for a single at the bar. They had around 8 beers none of which was too far above average. It was disappointing that they didn't have at least one brewpub-only offering. The family joined me for lunch and the food was equally unremarkable (but decent). Décor is typical tourist beachy, outdoor area was nice but I doubt it gets used all that much considering the typically iffy weather on the Oregon Coast.
Nov 12, 2015
More User Ratings:
Rated: 3.96 by jmdrpi from Pennsylvania

Reviewed by Danno4367 from Illinois

Reviewed by edhizdeid from Washington

3.71/5  rDev -10%
vibe: 4 | quality: 3.75 | service: 3.75 | selection: 3.5 | food: 3.75
The location is stunning! Facing the Pacific ocean is a hard thing to beat in my book. The place itself is very typical of a seaside bar, that is not a bad thing here. The staff was friendly but, beyond the bartenders, they had a hard time helping me with their beer selection. Talking of which, the beer selection was fine. They had their regular offerings and their seasonal beers available.
As for the food, fairly typical of a brewery/pub. Nothing crazy but it was fine.
Quite enjoyable place to stop at.

Reviewed by bhyndthebottle from Oregon

Rated by SCW from New York

Reviewed by Dcbelkot from Washington

They offer taster flights, but you can't pick your beers, which is a bit archaic. The beers we had were well made, but mostly unremarkable. I was quite disappointed by this as I knew of their numerous GABF and WBC wins and expected something pretty special. Unfortunately it seems that the awards speak more to their skill at entering competitions than their brewing particularly outstanding beers. Not that the beer was bad, but it was really no more than average.

The service was good,even though they were crowded. The food was good enough, but like the beer nothing special.

Overall, I left mildly disappointed, but my expectations were set too high by letting myself forget that GABF awards don't necissarily mean much.

Reviewed by almostjay from Virginia

The beer is good, not great. The food is greasy, standard pub stuff, nothing special. But the view, and the relaxed nature of the place, particularly on a not so busy day in the offseason, is worth a trip on its own.