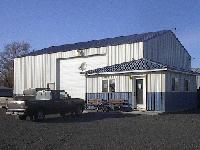 View: Beers | Place Reviews
Reviews: 2 | Log in to view all ratings and sort

Rocky Coulee isnt a brewpub, but a microbrewery with a tasting room. And the tasting room is only open one day a week  Fridays from two till eleven. If you stop by during the week and the brewer happens to be there, you may be able to procure some beers to go. Otherwise, see you on Friday.

The Coulee is known to exist at one or more address. Their website lists 205 North First Street, but I dont believe it. Besides, Odessas a small town (pop. 850) and numeric addresses arent overly important. As you enter town on Route 28, turn north on Alder Street, which may or may not be Route 21. Go two blocks then turn right on Railroad Ave., which of course is next to the train tracks. Rocky Coulee is about two blocks up in a sheet metal building on the left.

At 6.4% ABV, Fireweed Honey Blonde is the Coulees most potent and most popular beer. It is brewed with 60 pounds of honey per 15-bbl batch and is the only house beer available in six-packs to go. Others can be had in growlers, kegs, or party pigs. Unfortunately, I noted persistent measures of spoilage in all beers that I sampled so proceed with caution. Six beers are served, no cask, no nitro, no guests. Wine is available. Food offerings are limited to snacks such as pepperoni sticks and free pretzels.

Odessa is a grain farming community settled by 19th century German immigrants. The town still celebrates its German heritage each September during Deutschesfest, which may be an especially opportune moment for a beer-oriented visit. See www.deutschesfest.com for details. Both the brewer and his wife still grow wheat on farms homesteaded by their great-grandparents. The more I learn of it, the more amazed I am that anyone in the region can survive as a dryland farmer.

But the ever-present demand for local craft beer has assured Rocky Coulees need for repeated expansions. The tasting room evolved from its previous function as an office and later an outdoors patio was added. That patio is guaranteed to be the best place to be in Odessa on a Friday night.

I first tried Rocky Coulee beer at Deuchesfest, which is a community festival in the small town where the brewery is located. I won't add Deuchesfest to BA as an event, because it's not really a beer event, although the Biergarten is a big part of the festival. Here is a link to the festival page if you are interested: http://www.odessachamber.net/deutschesfest.html

The brewery was closed on the day I went to Deuchesfest two years ago, but I vowed to visit one day. That day finally came.

The brewery is open for walk-in service on Friday evenings. I found an un-official web site that said the hours were 5-9 PM, but the proprietor told me he is often open earlier (like 2 PM) and stays until whenever. It's a small friendly place. A three stool bar and three or four tables furnish the tasting room, along with the six or so taps that dispense the brewery products. The owner/brewer is there to serve the beer and chat about most anything. Beer dominates the conversation, and rightfully so.

The brewery offered six beers when I was there, Dunkel, Creamy Copper Ale, Heiferwizzen, BA Brown Ale, Fireweed Honey Blonde and Golden Wuss. I have tried everything but the Wuss (a light beer) and they are all good. Reviews will be forthcoming on BA, but I will do that when I have a supply of each brew on hand.

The service is first rate. I went in with the notion of buying a couple of growlers, knowing I'd have to make quick work of them in the interest of freshness. Tom, the owner, explained the virtues of the "party pig" a 2½ gallon pressurized container, which will keep the beer fresh for 2 months or so. I bought the pig, even though the growlers would probably have been more profitable for the brewery. I'll just go back and get my pig refilled from time to time ($28 fr a refill), and maybe that was the point after all? Every customer gets a packet of "pig do's and don'ts", with their purchase, which includes a business card with the brew-master's cell phone number, for those "pig emergencies."

Getting Rocky Coulee beer, and visiting the brewery might be a bit of a challenge, but well worth the effort. Odessa is off the beaten path to say the least. You can find Rocky Coulee beer in some Eastern Washington bars, and if you see them I recommend them highly. You can also visit Deuchesfest usually on the third weekend in September, where Rocky Coulee beer is prominent in the Biergarten.

If you want to visit the brewery, plan to be there on Friday evening. Coming from the east you can leave Spokane on Highway 2, take a left at Davenport, WA and drive southwest to Odessa on SR-28. If you are coming from the west, leave I-90 at SR-21, about 10 miles west of Ritzville, and drive north to Odessa from there. The brewery is on First Street, not to be confused with First Avenue, and is across the railroad tracks from the central business district. Odessa is a friendly little town, and I'm sure most anyone you ask will direct you to the brewery.

The Rocky Coulee Brewing Company is a nice micro-brewery in a charming small town setting. The beers and ales are of fine quality, very reasonably priced, and a visit to the brewery is a pleasant experience. I plan to visit often from now on.

EDIT: Fireweed Honey Blonde Ale is now being botteled on a limited basis, and is available at the brewery, and some central and eastern Washington grocery and convenience stores.

Rocky Coulee Brewing Co. in Odessa, WA
Brewery rating: 3.45 out of 5 with 26 ratings