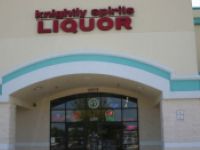 Rated by chitownfanatic21 from Wyoming

Reviewed by mgundy32 from Wisconsin

4.74/5  rDev +3.9%
vibe: 4.75 | quality: 4.5 | service: 5 | selection: 4.75
Checked out while on vacation based on the reviews here. This place is awesome. Beers everywhere, every format. They let you break down pretty much anything into singles which is great when traveling and wanting to try a bunch of local/regional stuff. The selection was great. I found some fun stuff to take back with me including a few hard to find bottles. Be a bit careful checking dates on some stuff as they did have a few 6+ month old NEIPAs. Staff was very friendly and helpful, chatted with me about some of my local places as well as making recommendations. Great bottle shop. I'll definitely come back when back in town.
Oct 05, 2019

Reviewed by Ocalafox from Florida

4.41/5  rDev -3.3%
vibe: 3.75 | quality: 4.5 | service: 4.5 | selection: 4.5
Nice store with amazing selection of beers in a small space. Individual stocking was very helpful with suggestions. I liked the fact that ALL beers (four packs, etc.) could be purchased individually. Purchased a Funky Buddha Morning Wood and several stellar local beers to include Edmunds Oast and Hidden Springs Ale Works.
Nov 18, 2018
Rated: 4.69 by KensWorld from Florida

Reviewed by CrafTeeBeer from Florida

4.64/5  rDev +1.8%
vibe: 4 | quality: 4.5 | service: 5 | selection: 4.75
The Orange Blossom Trail location is my Go-To bottle shop. Granted it is fairly close so that adds to the rating, but the selection is amazing compared to any other location in southern Orlando. Don't let the fact that it appears (and maybe it is) small and it is in a strip mall fool you. If you are a craft beer enthusiasts you will find some amazing choices from breweries near and far.

The staff is helpful and friendly. They know their beer so don't be afraid to ask for suggestions. Some of the best beers I have had I may never have tried if not for them suggesting them.

4.41/5  rDev -3.3%
vibe: 4 | quality: 4 | service: 4.5 | selection: 5
An excellent store with an exceptional selection of local, regional, US, European, even some lambics and guezue. The staff were super helpful, looking through stock not already on the shelves to find me what I was looking for. Looks like your standard strip mall liquor store from the street and inside it gives off the same vibe, but there is a good isle and a half of beer, including a full side of cold beer.
Aug 25, 2017

4.29/5  rDev -5.9%
vibe: 4 | quality: 4.25 | service: 4.25 | selection: 4.5
In Orlando there's really not a lot of choice for packaged beer. I'll advise against ABC as some of their stores really have nothing, and go with Total Wine & More as a solid choice for local beers and what not. Beyond that, however, there's really only one choice, and that's Knightly Spirits.

It's in a strip mall just like everything else in Orlando, and it doesn't look like much from the outside. Nor does it look that much better once you enter, but when you get back to the beer selection you'd better brace yourself, there are stacks of cases of beers from the likes of Prairie Artisan, Saint Somewhere, Stillwater, Crooked Stave, Green Bench, and more. There are beers you've probably never seen from countries like Denmark (not Mikkeler!), Belgium, and Spain; as well as special releases from multiple countries including Britain; and even vintage beers (which I don't think are over-priced). In the cold section you've got a great selection of local beers including the highly popular Funky Buddha, as well as Crooked Can, J Dubs, Due South, Cigar City/Brew Bus, MIA, Coppertail, Central 28 and more.

If you can't find something you want here there are only two possibilities: you either don't really like beer, or you're mentally damaged. And if you need help finding something you don't even really have to ask, someone will surely ask you. I've received excellent recommendations on both things to buy and things to avoid, and you don't normally find that.

One thing to watch out for however is that some of the beer is old. For many beers that doesn't matter (mostly everything from Crooked Stave for example), but for others it's quite important so always check. It might be due to buying in large quantities, or that some of the stock doesn't get rotated or sell as well (they are certainly busy handling the items that do sell quick, like Funky Buddha).

Reviewed by OffallyGood from District of Columbia

4.51/5  rDev -1.1%
vibe: 4 | quality: 4.5 | service: 4.5 | selection: 4.75
Great place! I didn't see an issue with the age of IPAs. Would probably say the exact opposite of others - Jai Alai and Sunshine City less than 3 weeks old. (Compare to the Whole Foods by the theme parks with 2 month old Jai Alai). So many sours and Belgian brews. Good selection of local breweries. Definitely wouldn't have expected this type of selection when I walked in. Go out of your way. Highly recommend.
Oct 03, 2016
Rated: 5 by tugg407 from Florida

Rated by mjneal84 from Florida

Rated by Mrgoblin from Canada (QC)

Reviewed by NolaHopHead from Louisiana

4.39/5  rDev -3.7%
vibe: 3.75 | quality: 4.25 | service: 4.5 | selection: 4.75
Stopped in on way back from Disney. Really big selection of brews I can't get at home, so was able to grab a few nice brews by Cigar City, Funky Buddha, Dogfish and Sixpoint. Service was friendly and helpful. Biggest plus is that you can buy singles of anything. The only negative really is that there were some very old brews throughout, like 6-8 month old IPAs front and center in the cooler, had to check dates on everything.
Feb 13, 2016

Reviewed by richobrien from California

Rated by MacSon1982 from Florida

Reviewed by RexKramer from Illinois

4.37/5  rDev -4.2%
vibe: 4 | quality: 4.5 | service: 4 | selection: 4.75
Worth the short drive if you're staying in the Sea World area (and maybe beyond). Kind of a tight space, but they manage to pack a whole lot into the area. They seem to have stuff packed in every nook and cranny of the place, so make sure to take some time to poke around. Nice selection of import and domestic bombers as well as a better than average selection of cold micros. They allow any of the cold stuff to be sold as a single bottle as well, so you can mix and match to try a bunch of stuff. I was quite pleased that they had Crooked Stave.

I've tried a number of places around, and they all have had some nice selections. This place tops them all in the Sea World area.

Reviewed by AngusOg from North Carolina

4.64/5  rDev +1.8%
vibe: 4 | quality: 4.5 | service: 5 | selection: 4.75
I can see why this is one of the more highly regarded bottle shops in the Orlando area. The selection was above average and the staff was friendly and knowledgeable (I think the dude I talked to may have been the owner). I was on a tight time constraint when I went in and grabbed a couple nice things, but I think if I would have had more time (and money) to really go through everything with a fine tooth comb, I would have probably found even more gems. Recommended.
Apr 04, 2015

Reviewed by RoamingGnome from Wisconsin

4.44/5  rDev -2.6%
vibe: 3.25 | quality: 5 | service: 3.75 | selection: 5
If you're going with family on a magical Disney adventure, then I recommend you stop in for provisions. You will need alcohol after hours in line and overpriced meals. I visited the location at Blossom Trail. Truth be told, I could have dropped a Disney amount of cash at this place. I guess it's a good they only offer baskets, rather than carts. The staff on hand was friendly enough. The beer selection is fantastic, but quite chaotic. Organization was not a strong point. I found boxes of Barrel Aged Bigfoot sitting in one aisle. I was happy to grab one, as this would have been a pain in the ass to obtain at home. That's really just one example, so my advice is to really scrounge around. There are many hidden treasures. Another nice feature is the ability to buy singles of just about everything. This made it easy to sample many of the local and regional options. The limited bombers from Cigar City are behind the counter. In conclusion, I would certainly recommend giving this liquor store your patronage.
Mar 26, 2015
Rated: 4.22 by alienlifeforcecube from Massachusetts

Reviewed by SomethingClever from Ohio

4/5  rDev -12.3%
this place has great selection. I would venture to say if it's sold in Florida they probably stock it. That being said they did not have anything mind boggling either. Which made me wonder with what they had and the amount in which they had it do they hold back the good stuff to regulars? The reason I think this is because from what their purchasing power appears to be you would think they get a lot of the limited releases too, yet there was really not any rare beers for sale.
Nov 25, 2014
Rated: 5 by baybum from Pennsylvania

Reviewed by floridadrift from Florida

Rated by Evango from Louisiana

Reviewed by Mangbus from Florida

5/5  rDev +9.6%
Not many places get the selection that these guys do. They buy the best. Each time I have been here, I always find something on my want list. The staff is helpful and the prices are in line with other local shops. I drive past at least 4 other bottle shops to go here.
Sep 25, 2014
Knightly Spirits in Orlando, FL
Place rating: 4.56 out of 5 with 171 ratings