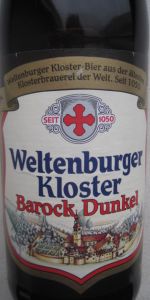 Look: lovely amber/brown colour with a beige, persistent head, and lacing down the glass

Overall: this is an extremely enjoyable beer. As with all traditional beer in Germany, it's designed for repeated drinking without boring or destroying the palate, and it walks that line brilliantly.

Rated by MHL81 from Illinois

Taste:
Follows the nose closely - rich dark bready malts and chocolate. There is an additional note of licorice or anise. No discernable bitterness. There is a faint earthy note later in the sip and the chocolate notes transition to bittersweet chocolate. The beer dries very slightly on the finish.

Feel:
Very smooth and balanced. Body is medium, with a lean towards the fuller side.

Overall:
A phenomenal Dunkel. Flavorful and yet easy-drinking. The flavors have real depth to them and could even rival some doppelbocks that I have had. And it is only 4.7% ABV. Barock Dunkel has been my favorite Munich Dunkel (or in my top 2 Dunkels) since I first had it over a decade ago.

Reviewed by jonphisher from New Jersey

The nose is mostly a sweet rich bread aroma, some dark fruit and caramel/toffee like smells to it too.

The taste much like the nose has a sweet rich bread and crusty flavor, but it also presents some dark grain and nuttiness to it as well. A nice little subtle but noticeable hop kick to it as well, comes out in the form of almost a little black pepper like.

Mouthfeel is light but full, it has some nice body but it drinks much lighter than that body would make you think before you swallow. A minor sweetness to it and little to no bitterness present.

This is a good and enjoyable dunkel, it isn't my favorite but I'm enjoying it enough to be glad that I have a whole six pack.

Mild caramel, cream & farmhouse funk upfront in the nose; a hint of dark chocolate as this warmed.

For a lower ABV beer, this packed a punch in nose, mouthfeel & flavor. I'd love to have another!!

Overall: Fine, forgettable. Shame on Ayinger and their Altbairisch Dunkel for ruining me when it comes to other dunkels.

Rated by eatsluggs from Oregon

4.35/5  rDev +10.1%
look: 4.25 | smell: 4.25 | taste: 4.5 | feel: 4.25 | overall: 4.25
Poured from fridge temp. Pours a very dark brown with no transparency. Head was minimal and quickly dissipated. The nose is fantastic. Freshly baked sourdough bread, fresh juicy figs, subtle notes of dark cherries, wheat, a little bit of butterscotch candy. Taste nicely follows the nose. Quite malty. Not overly sweet and not too bitter, but both are clearly there. Very smooth. Chocolate (milk), toffee candy, earthy notes (dirt, but in a good way), bread (like a dark German bread), dark fruit (figs again), and a little bit of walnut. This is just phenomenal. So drinkable yet incredibly flavorful. I wouldn't have guessed it was only 4.7% - the amount of flavor made me jump to the 7% - 8% range. The aftertaste is a bit sweet, but is predominantly bitter. This is also in a really nice way. Overall, one of my favorites of the style. I will be buying more.
Jun 14, 2021
Rated: 4.5 by bigred89 from Maryland

Tastes of nicely roasted malts with a bit of caramel mixed in up front with the euro lager yeast present. Has a mild bitter finish that rounds it out nicely. Nice body and mouthfeel.

Reviewed by taint67 from Georgia

4.19/5  rDev +6.1%
look: 5 | smell: 4.75 | taste: 3.75 | feel: 4 | overall: 4.25
I was very excited when I came across this beer. Why? Because Munich Dunkel is my favorite style of beer. Here in Georgia you go to a good beer store they have 3000 IPAs and 1 variety of Munich Dunkel. Another reason is these folks have been making beer for a thousand years. It poured like you think it would....like a work of art. Dark, clear mahogany. The nose was all Munich Dunkel caramel, bready, wonderful. The taste was amazing...old school balance between the subtle complex malty flavors, all over the spectrum, neatly balanced out by the bitterness. To me it is up there with Hofbrau Dunkel, a world classic. The only thing with me is these beers are just slightly "thin" for my taste. But who the hell am I? They have been brewing for a thousand years....right?
Mar 20, 2021
Rated: 4.27 by SViterileroux74 from Texas

Reviewed by robertfyffe from California

Reviewed by champ103 from Texas

4.43/5  rDev +12.2%
look: 4.5 | smell: 4.5 | taste: 4.25 | feel: 4.25 | overall: 4.75
A: Pours a dark brown with some ruby red around the edges. A dense dark beige head forms with excellent retention and plenty of lace.
S: Oh man that nose is fantastic. Dark pumpernickel bread, maybe a bit doughy. Chocolate and dried plums and raisins. A touch peppery and yeasty. The malt character here is amazing.
T: Like the nose, plenty of big malt flavors going on here. Dark rye and pumpernickel bread. Chocolate and dried fruits again. Just a touch of roast, and even a touch of earthy hops. Though the breadiness takes over again. It never becomes to sweet, and the malt flavor is so nuanced, I love it.
M/O: A light to medium body. Good crisp carbonation. Supremely clean. Ridiculously easy to drink. Downed in big gulps, as my favorite dinkability saying goes :) Then I immediately want another one.

Just an excellent example of a dark lager. Actually drinks like a lighter Dopplebock to me. Which is to say it drinks above its weight. Most American breweries can't get this much malt flavor and character with an 8% Dopplebock, let alone anything below 5%. Not that that is the soul mark of a great beer, but it is certainly part of it. An all around excellent Dunkel Lager.

4.42/5  rDev +11.9%
look: 4.5 | smell: 4.25 | taste: 4.5 | feel: 4.25 | overall: 4.5
Pours a clear, dark amber to mahogany coloration that turns ruby red when held up to the light, with a large, foamy, lasting head. Smells of bready toasted, caramel malt and hints of chocolate, dried fruits and nuts. Taste follows the nose, with an excellent balance of rich, sweet'ish bready, toasted, caramel malt and rather light, earthy hops, with notes of chocolate, raisin and hazelnut, as well as hints of treacle and licorice. Finishes with a light sweetness and some bready, toasted malt, chocolate and nutty accents lingering in the aftertaste. Full mouthfeel with a medium body and carbonation.

While I'm not a huge fan of the style, I still have to say that this is an excellent example of a Munich Dunkel that is quite rich and satisfying, yet easy-drinking at the same time. In fact, the depth of flavor is quite impressive for the ABV here, with a complex malt balance and just enough hoppy accents to prevent this from becoming too sweet, which it really manages very nicely as opposed to many other examples of the style. Probably the best Munich Dunkel I've had, although it's not really a style that I seek out, with a rich malt complexity and great overall balance.

T - A complex brew. Brown bread, good bitterness of the herbal and grassy kind, no sweetness. 4.25

MF - Medium bodied, but seems too thin for the style and my expectations, with a dry lingering bitter finish. 4.0

Reviewed by ATL6245 from Georgia

Overall: Considering I have not idea how long this bottle was on the shelves (no decipherable date codes), this is a very good Dunkel. Right on point for German quality. Perfect color and clarity. Excellent head and retention. Flavorful, without being overpowering. Malt forward, sweet on the front end with a clean finish. Full bodied, creamy and soft. I could drink these all day.

The beer is listed as: Lager - Munich Dunkel.

The bottle was opened and immediately poured into a dimpled stein (Hofbräuhaus). It poured a deep brown, immediately letting you know of it's malty goodness. Brown, thin, with the correct amount of carbonation (approx. 2 inches from a gentle pour with a tipped glass). The picture was taken about 20 seconds after the pour was complete...Had to get Pizza on the plate, first. Not sure how the look could get any better for the style. The head retains nicely at the start, and is pale tan.

First impressions: Like many german beers, nothing jumps out. Opening a dunkel isn't like opening an IPA. You don't open it and say, OH MAN, THAT"S BREAD IN A GLASS! You have to get close and smell it. Everything about the pour and initial smell lends itself to being a traditional dunkel.

Smell: Not much smell, which is fine. A lot of malt, and a lot of those "lager notes," which I am struggling to describe. You just know it when you smell it. I suppose there are limited ester or yeast smells that remain, but it's nothing like a Belgian. Score: 4.0

Taste: Classic Dunkel. I'm not experienced enough with traditional German styles, or dunkel's in general to know how this compares as a munich dunkel, but within the dunkel category it is stellar. It's my favorite, although admittedly I have had few compared to say, stouts, for example. Taste is heavy on the malt, low on the chocolate (which directly stands in contrast to the Von Trapp version, which is almost like a chocolate-bar level of chocolate). Outside of these flavors, you just get some of those classic traditional lager/bready notes that I'm struggling to describe. Score: 4.75

Mouthfeel: Traditional. Thin, with the appropriate amount of carbonation. Score: 4.50

Overall, I love this beer. It's so easy drinking. One way or another, I've made sure to have at least a couple bottles on hand at all times for the past several years. I've even driven out of my way on work trips just to pick some up from stores that I know that carry it, if no one near me does. (That's no longer a problem, since we moved last year, but it used to be for years and years.). I've loved this beer since before I ever found BA. Score: 4.75

Sweet and spicy nose, with notes of pepper and rye mingling with toffee, caramel, bread, prune, cola, and red grape.

A touch sour up front, which improves but does not completely fade as the beer warms. Dark bread, caramel, and cola notes, with a musty pepper character in the middle. Strong raisin flavor on finish, which leaves behind an impression of fruit bread.

Slick and smooth; lively with bite.