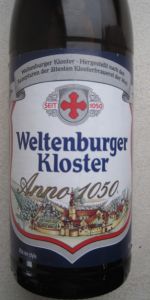 
Look:
Clear golden amber that is somewhat more gold than amber. Initial head is 1.5-fingers of off-white foam. The head dissipates quickly to a ring-and-cover. No lacing.

Taste:
Again, somewhat restrained. Bread dough. Some caramel and even sweet fruits. Enough hops to balance. The taste is a bit off for a Märzen. Maybe not for a Festbier.

Overall:
Not what I was expecting. This beer is more an amber-colored Festbier than a true Märzen. It is definitely drinkable and it is not bad. It's just not really what I expect in a Märzen. I wonder if I got an old sample? I will have to re-review at some point.

My ratings are for this sample as a Märzen. I would rate it higher as a Festbier.

2.97/5  rDev -20.6%
look: 2.5 | smell: 3 | taste: 3 | feel: 3 | overall: 3
500mL can stamped 010116 06:08 and 25L08 (whatever that means?) poured into a dimpled mug at fridge temp 5.5% ABV. The beer pours fairly hazy opaque medium amber with minimal light khaki head. The head recedes to a thin ring and single layer of tiny bubbles. The aroma is mild with sweet caramel malt. The taste is bittersweet caramel with light oxidation and low bitterness. The mouthfeel is thin to medium bodied with average carbonation and a semi dry finish. Overall, not great.
Mar 23, 2022

T- malty and nutty up front with notes of caramel, toffee, toasted nuts and bread crust. Mid-palate gives notes of floral and peppery hop bitterness, along with more caramel. The finish is malty with lingers of caramel and bread

Nice flavor. Malty and bready, toast at the start. Slight bitterness in the middle, growing a bit into the finish. The back end picks up some spicy herbal hops providing a counterbalance to the bready malts. A bit sweet initially, but drying out toward with finish with a pretty much dry aftertaste. A very nicely put together märzen, if quite a bit less complex than some.

The mouth feel is light and smooth, body on the thin side.

Overall, this is a crisp, easy-drinking, light bodied märzen. It seems to fit in the middle between, say, the Ayinger and the lighter Festbier / Wiesnbier. Regardless of where you "slot" it, this is a good, enjoyable beer.

Malty, interesting and easy to quaff. I'd have another!!

4.38/5  rDev +17.1%
look: 4.75 | smell: 4.25 | taste: 4.5 | feel: 4.25 | overall: 4.25
Review 1637
Anno 1050 Marzen
Weltenburger Kloster
Date: unknown
I am unsure what to think about this beer; I have never heard of this brewery. I used a German mug and served the beer around 45 degrees. The pour created a frothy and airy two-finger light tan head. The slow dissipation left gobs of lacing on the glass. The color charts around SRM 14, deep amber with a rusty tint. The beer is clear, with a few carbonation bubbles dancing their way towards the top.

The aromas are caramel, floral, toasted bread, a touch of clove, and earthiness.

I taste caramel, floral, toasted bread, crackers, a hint of cloves, a skosh of banana, and earthiness.

The mouthfeel is creamy and soft.

The body is medium, the carbonation is low, and a tender finish.

This beer is tasty. The malt is restrained, and the caramel character is not as pronounced. I am glad I got to drink this beer.

The beer is listed as “Marzen” on the label, and a “Lager – Marzen” on BA.

I am too lazy to go check the can, but I seem to recall there being an October on the can, so I assume this was Canned 3-6 months ago.

The beer was removed from a 45ish degree temp fridge after having been refrigerated for approximately 10 hours. Beer poured into a classic Haufbrauhaus dimpled mug.

First Impression: This is a beautiful beer. It pours with all the carbonation and head that it should. You actually get an effervescent aroma as you pour. It is also a beautiful colour, and as the head resides some head remains on the surface for >20 mins.

Appearance: To me, this is what an Oktoberfest is supposed to be like. Orange-golden hay in color, with a heavy emphasis on the orange side of the color wheel. Beautiful head from a moderate pour (had to actually be more careful because there was so much head.) I rarely give 5s, but what more could you ask for in appearance for this style? 5.0

Smell: Unlike most other beers within this category, this beer actually has a fairly strong aroma. The nose follows the taste: Belgian yeast (i.e. bready with hints of banana and clove), and also “bier,” as I like to say. 4.5

Taste: This is pretty much perfect for me. I’m sure others think I’m crazy. I love their Dunkel as well, and it’s not rated as highly as I would either. There’s so much flavor, especially for a 5.5% ABV beer. You get a lot of the bready flavors associated with Oktoberfest beers, but you also get the banana/clove from the yeast. It’s insanely crushable, which for me is a test of just how good a low ABV beer (like 5.5%) is. At 5.5%, you better be able and want to drink more than one. 5.0

Mouthfeel: Nothing unique or special, but spot on for me. More viscous than water. Just feels (get it) right to me. 4.75

Overall: This is what all future Oktoberfest beers will be judged against for me. To me, it is everything that I want. It’s clean, it’s crisp, it has the Belgian esters that I enjoy, but it’s distinctively marzen. It is absolutely drinkable, it’s not heavy (although, I guess, maybe you might think the mouthfeel is too heavy). I mean, I just really don’t have anything to knock against it from the perspective of what it is and the style. 4.75

This is pairing quite well with our dinner tonight – semi-homemade Indian. I actually got out some more rice/vegies, tofu and korma sauce because I opened this. -And, I did so after tasting it. Immediately, it was, “wow, this would pair perfectly with that food.” At first I had just wanted to buy a single in case I did not enjoy it. I was forced to buy a 4-pack, which I only chose to do given my love for their dunkel. I’m glad I did. I’ll drink these.

This smells like spicy hop character, breadiness, biscuits, and a light grainy sweetness.

This is a fairly standard but tasty take, with a light but present spicy hop character, very little sweetness, a touch of toasted grain, and maybe a bit of honey.

This is light bodied, clean, and very crisp, with a wonderful drinkability.

This scratches the itch for this style - it feels like a lighter version of a marzen, but not quite all the way down to a festbier.

Reviewed by barnzy78 from Illinois

Reviewed by Anders91 from California

Taste: malt, a little bit of yeast and bread, although weak flavor for the style. Closer in flavor to a Festbier

Reviewed by Mikemcgrath4 from North Carolina

Reviewed by Mortal_Wombat from Texas

3.35/5  rDev -10.4%
look: 4.25 | smell: 3.5 | taste: 3 | feel: 3.5 | overall: 3.5
Poured from bottle into a pint glass. Nice golden amber color in the glass. Modest white head with some lacing. Much sweeter malt than I was expecting, with an almost apple-like flavor combined with hints of honey and caramel. Finishes with a very slight hint of bitterness.

Overall, a little too sweet of a märzen for me, but still quite drinkable and a decent option in a pinch/out of season.

Overall: Certainly on the sweet side and with its apple flavor, it's more Mott's than Märzen.

3.78/5  rDev +1.1%
look: 4.25 | smell: 3.75 | taste: 3.75 | feel: 3.75 | overall: 3.75
L-Commercial level appearance on this beer for sure. Nice amber golden colored lager with a nice rocky head that doesn't dissipate.
S-Pleasantly surprised by a nice stone fruit aroma up front. Typical malt follows, maybe some apple juice. Overall, although its quite nice aroma wise, it's not very strong in the nose.
T- Very drinkable. I mean that in a good way and a bad way. There isn't much pizzaz to the flavor of this beer, but it's extremely fresh tasting and enjoyable. There is nothing off-putting at all about this Oktoberfest at all. Cracker is upfront and present right away. With some other notes of apple juice, wheat and sweet malts in there as well. A bitter bite ends each sip nicely. My one con with this beer thus far is it's just a little too subtle and toned down.
F- Slightly more on the medium bodied side, very, very, drinkable.
O-This is a very well made marzen that is super drinkable. It knows what it is and it's been that way for quite some time. Not the best I've had of the style and of course not the best beer I've had ever but I enjoyed every sip taken and I appreciate the drinkability. This is perfect for Oktoberfest and would pair extremely well with some nice German food.

3.94/5  rDev +5.3%
look: 4 | smell: 3.75 | taste: 4 | feel: 4 | overall: 4
a fine glass of beer and a real dangerously drinkable dimpled mug, something about proper glassware still gets me stiff. a light but traditional take on the style, nicely foamy and frothy from the tap with some real gusto in terms of carbonation and zing on the palate. the balance is there, malty and earthy and with some sort of decadence to it, but its never really sweet or anything, and it ends up being something you could sort of slug into oblivion, at least thats how i feel. things like caramel and toffee are there, but there is a brilliance on the carbonation and a dusty sort of grounding old world vibe that keeps it from being big or overly rich, its smart and simple, classic and memorable almost instantly, and just one of those beers you shake your head and give thanks that it exists. there are so many more distinct and challenging and even better beers in this style, but a trusty steed like this is always appreciated, and i admire this for just being a very well executed example of a marzen without reinventing anything. we would all be lucky if we could drink something like this everyday, especially on draft. a winner in my book, and maybe the best one i have had from these guys so far...
Jul 11, 2019
Rated: 3.75 by alexsergio from New York