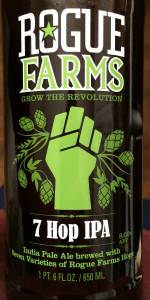 Notes: In a bold collaboration with Mother Nature, we grow our own varieties of aroma hops at Rogue Farms in Independence, OR. We also string, stake, train, test, trim, separate, sort, kiln and cool them. Brewmaster John Maier meticulously selected and blended 7 varieties of our aroma hops to create the bold and balanced profile of our 7 Hop IPA.
View: More Beers | Place Reviews
Recent ratings and reviews. | Log in to view more ratings + sorting options.

8/04/14:
Lightly hazed, bright amber coloration, under a slim white head. Perfect look for an IPA, right on the money.

Taste: Bracingly bitter hop attack is the first pounce on the palate, lingerly long. Too much for some, I'd bet, but it's right up my alley. Or, "in my wheelhouse", as some say. I spend more time in alleys than in wheelhouses, so that's where I head.
Juicy, juicy stuff, an utter delight on the tongue.

Medium-bodied, happily hoppy, with a modicum of malt to keep it balanced. My kind of double IPA.

Hazy appearance with an almost muddy amber/ brown color to it, pours with a half finger worth of anemic looking head that has poor retention to it and leaves watery lacing that runs down the side of the glass.

Nice aroma to it, a bit more ale character then most IPA's with a good amount of caramel malt to it, as well as some fruity hop notes of apricot, citrus and melon.

Good amount of fruity hop flavors forward, mildly bitter with a nicely balanced blend of apricot, grapefruit and marmalade flavors to it.

Smooth bodied malt base with a good amount of sweetness to it's dark amber caramel flavor, some hints of toasted biscuits with a faint coffee bitterness and ghostly hints of amaretto towards the back end.

Finish is a bit more of the IPA expected with a bitter, pithy orange flavor that has a faintly astringent, pine hint to it that lingers on the aftertaste.

Medium bodied with a fairly below average amount of carbonation to it keeps if from really feeling “bright” but it is well balanced with a fruity, caramel ale sweetness forward and a moderately bitter IPA finish to it.

Poured from a brown 12 oz. bottle. Has a burnt orange color with a 1/2 inch head. Smell is of melons, some tropical fruits. Taste is melons, light pine, a strong malt backbone, moderate bitterness. Feels medium bodied in the mouth and overall is a pretty good beer.

33cl bottle, both fresh and almost a year old.

Gold side of amber, nice half a finger foam that only fades slowly.

Aroma is tropical fruit when fresh, turning towards stone fruit as the beer ages. Pine with just a hint of citrus.

The taste is delightful.. the hops in perfect balance with the body until the end of bb. Just the right amount of sweetness, even whe mature. Aftertaste of sweet stone mixing with a complex bitterness.

Overall a very good 1 1/2 IPA. No alcohol even when close to 8%. Aging potential to explore.

**
03/13/14
Bright orange color, with a small white head. Aroma Is Hops, flowers. Taste is smoke, ash, bitter hops. Some citrus in the aftertaste. Very smooth, but I don’t love the flavor."

Opened two months after Christmas - got as a present. Definitely the malt has taken over. But I've been corrupted by the Mosaic hop. This is ok, I'll have to try it more fresh.

Got this beer for Christmas from my cousin and decided to have it tonight as the bottle that's breaking up the Greenpoint cans that I'm slowly going through. Haven't had a Rogue beer in ages (I love the Shakespeare Stout!) but this one was a good brew to get back into the groove with. Full of hops, oil, and flavor, it went down easily without feeling too heavy and the 7.77% ABV was a nice touch as well!

This had a nice, amber pour to it along the line of the Troegs Nugget Nectar (which used to be my gold standard) and with plenty of sudsy head to top it off. Slightly hazy, this left behind a nice amount of soapy lacing on the side of my pint glass, along with one fat ring a little less than halfway down. Nice amount of metallic burn, earthy bitterness, and crystalline sweetness in the very muted but steady nose as these all came through a bit stronger in the taste. With so much going on here, it was tough to pick out various notes but this felt like an Amber, an IPA, and a Barleywine all thrown into one; with a hint of barnyard funk thrown in for the hell of it! Fairly slick and very oily, this felt nice on the palate as each slip slid right down without me even attempting to have that happen. A dank, earthy, and weedy aftertaste lingered but that too, wasn't terribly potent.

Plenty of alcohol in this but not enough to overpower everything else that was going on. Quite an interesting brew, this was a step up from how I remember Rogue beers tasting. Ideally, this would get a 3.77 from me but this was better than that, and enough to ask for an 8 or 9 hop beer down the road. If it had this balance and well-rounded nature, I'd give that a go in two seconds!

As you crack open the bottle you’re hit with a month-watering aroma of malted orange rind, and star anise imparting light malted citrus note that's crisp and almost peppery, yet refreshing. The brew pours a very hazy golden cooper with a light head.

Upon sipping the month feel is medium bodied, mildly carbonated and exceedingly smooth. The medium bitter melody of the hops blend seamlessly before tailing off into the mild citrus end note. Each slip imparts a crispy mouth feel that pleasantly coats your month. A hint of malt rounds off the experience and encourages a second slip.

I was worried the milder bite of the hops would be overwhelmed with the building sweet malt, but the beer remained crisp and balanced to the end. Landing it off the charts on the drinkable scale.

Fantastic after taste. Smooth as hell.

Pours a cloudy amber color with an orange hue. One can tell that this is a hoppy drink considering towards the end of the pour, hops sediment is visible. Minimal head for the style, it soon dissipates but leaves a thin collar that retains. Nevertheless, despite the thin head, it’s an attractive looking drink.
Tropical fruit greet the nose in all their juicy sweetness. I detect mango, papaya, guava, pineapple and passion fruit. The malt aroma hints at crystal/caramel.
First impressions in the mouth are of a rather clean and dry palate brew that belies the juicy sweetness of the aroma. The malt texture feels full and bready. However, the 7 varieties of hops soon make their presence felt. They provide a moderate bitterness and flavors of pine and tobacco in the finish. Unlike the aroma, they hint more at citrus, grapefruit pith and light lemon tartness, rather than tropical fruit. Also, as the drink warms, the sweetness opens up and reveals a silky caramel flavor.
Medium bodied with a supple malt fullness. Oily and slick, yet, dry. The carbonation is soft and gentle. Easy to drink and enjoyable.

Light amber, cloudy with a little carbonation, and topped with 2 fingers of creamy, beige head.

Sweet and caramel like, but full of tropical fruits, oranges and children's aspirin. Pineapple and jackfruit, pine and a dull, bitter finish. Getting lemons and lemon zest as well.

Got this yesterday at Namton's, drinking it today at home. Very balanced and flavourful beer. More of a showcase for hops, but not overly hopped compared to some brews.